CNN's Jake Tapper reveals the one Trump expression he agrees with 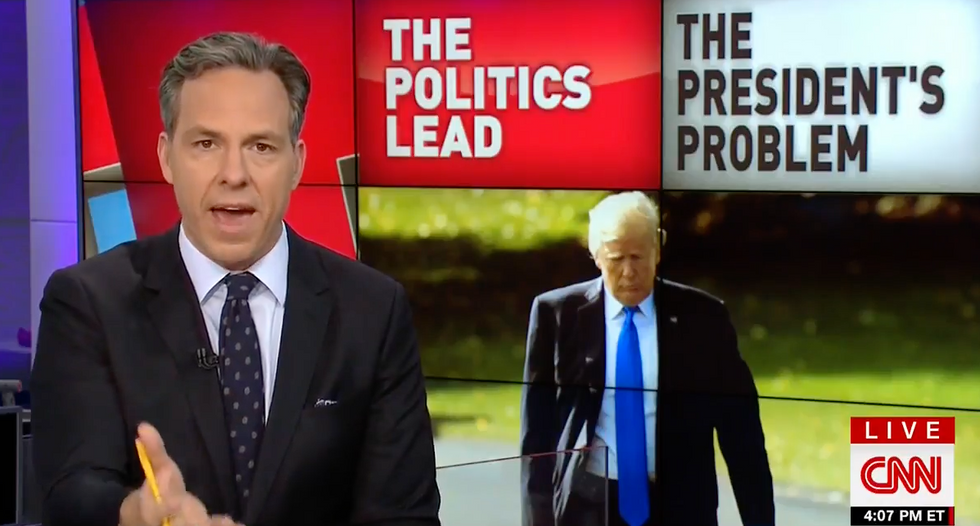 CNN’s Jake Tapper on Friday hit Donald Trump for speaking before he thinks, nailing the president’s legal team for walking into a legal minefield with their ever-shifting explanation of Trump’s $130,000 payout to adult film star Stormy Daniels.

“Today, it got more difficult to discern the truth,” Tapper admitted. The host noted Trump on Friday argued Giuliani “just started” on his legal team and is going to “get his facts straight.”

“All right,” Tapper said. “Giuliani has been working for the president for more than a week, he didn't just start yesterday.”

Tapper said “that lie is inconsequential” compared with the deluge of lies coming from the administration.

“These are lies about the scandal,” Tapper late explained. “But as we've seen, the president is willing to lie before all sorts of things. He even lies about his potential triumphs.”

Tapper pointed to a Trump tweet Friday claiming the three Americans held in North Korea were captured during Barack Obama’s administration—when, in reality, two were captured last year, with Trump in office.

“That tweet remains up, a monument to how much President Trump just doesn't seem to care about the truth,” Tapper said.

The CNN host then rolled a clip of Trump on Friday, telling reporters to “learn before your speak.”