If Rudy Giuliani is getting booed at Yankee Stadium where is Trump going to live after his presidency? 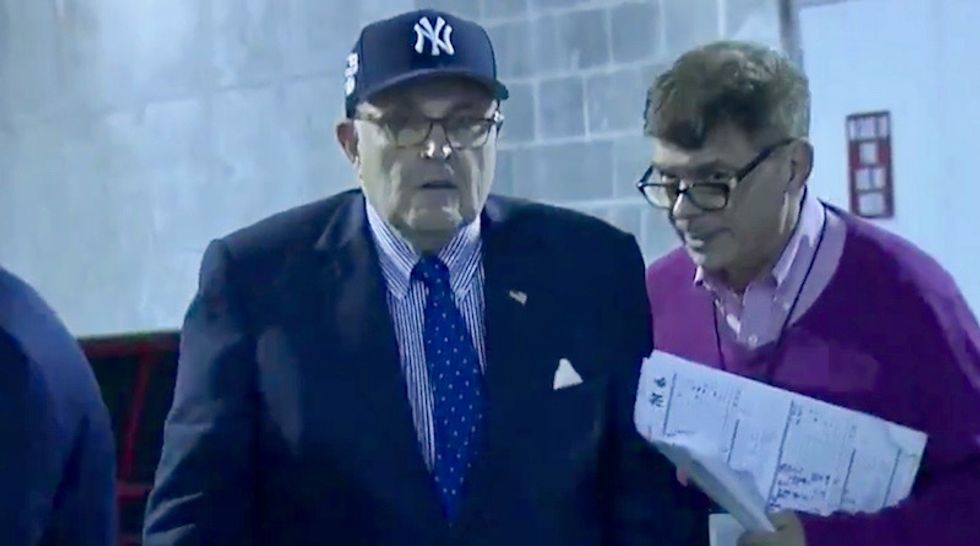 Rudy Giuliani at a Yankees game this week/Screenshot

At Yankee Stadium on Monday, Rudy Giuliani could not even draw a polite round of applause for his birthday, speaking to his ruined legacy in the community. Instead, Yankee fans viciously booed Giuliani on Memorial Day, a humiliating blow for the former mayor who oversaw the aftermath of Sept. 11.

The 74 year old has never been the most popular political figure in the five boroughs. But reports from Yankee Stadium suggest his support has reached an all-time low.

Giuliani spends most of his days lately on TV, where he steadfastly defends President Donald Trump, serving as his personal attorney. Giuliani has attracted criticism for his TV appearances — both for his blatant obfuscation and his proneness to gaffes, such as when he admitted Trump repaid Michael Cohen for the hush money given to adult-film actress Stormy Daniels.

Where is Trump going to live post-presidency? NYC presents some real challenges given his dislike of protests. https://t.co/d8GiOjH2X5
— Maggie Haberman (@Maggie Haberman) 1527537475.0

While Yankee fans do not represent all of New York City, it is safe to assume they were speaking for the whole community when they rained boos down on Giuliani on Monday. The treatment Giuliani received raised an interesting question from New York Times reporter Maggie Haberman: "Where is Trump going to live post-presidency?"

Like Giuliani, Trump has little fanfare in his hometown. The city voted for his political opponent, Hillary Clinton, overwhelmingly, and his election win only prompted mass protests throughout Manhattan. Trump attained stardom thanks to the personality he helped cultivate in New York tabloids. Trump's property in New York served as the premise for his hit-TV show "The Apprentice," which further established his national celebrity. Yet there's a real, genuine possibility Trump will no longer be able to have his domicile in New York. His sensitive disposition may not allow him to overcome the open hostility he would face on the streets.

The obvious answer to the question — where will he live after the White House — is Mar-a-Lago, his resort in southern Florida. Trump frequently travels to his hotel in Palm Beach, where he loves to golf and escape the pressures and responsibilities in Washington, D.C.

While many Americans are unconcerned about Trump's welfare after the White House, the notion that Trump cannot return home is unrivaled in recent memory. Former President Barack Obama has already dedicated much of his post-presidency to building his presidential library in his hometown of Chicago. New Yorkers are likely not ready to start thinking about a Trump library. In their defense, it's kind of an absurd concept.