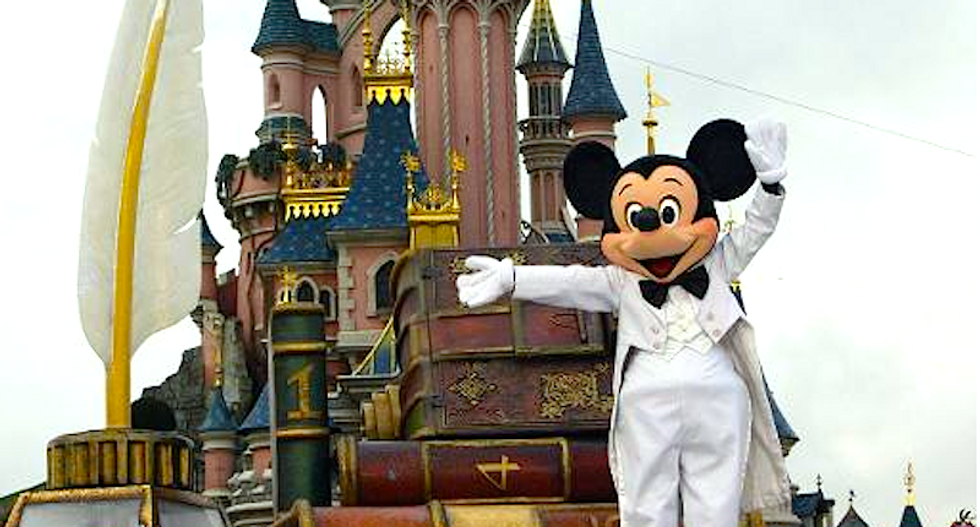 For a company that has built its multibillion dollar brand on animated features based on fairy tales, it’s a little surprising that Disney isn’t up on its fables. One that could have come in handy is that classic of unknown origin about the scorpion and the frog. You know it, right? It’s a fun bit: A scorpion asks a frog if it can ride on its back to cross a river, and promises the frog it won’t sting him.

Midway through the journey, sure enough, the bug delivers a venomous poke to the amphibian, ensuring both will drown. When the frog asks why, the scorpion replies that stinging is in its nature.

Today, Disney-owned ABC is the frog flailing before millions after Roseanne Barr did the inevitable, delivering her sting by way of a racist tweet posted around 2:45 a.m. that has since been deleted. This time she described Valerie Jarrett, senior adviser to former President Barack Obama, as a combination of the Muslim Brotherhood and the "Planet of the Apes.”

The resulting furor led ABC to cancel its revival of Barr’s show “Roseanne,” confirmed in a statement from the network’s entertainment president Channing Dungey. “Roseanne's Twitter statement is abhorrent, repugnant and inconsistent with our values, and we have decided to cancel her show.”

Disney CEO Robert Iger co-signed on to Dungey’s statement with a tweet of his own:

ICM Partners talent agency also announced that it has dropped her as a client. This stands to be a very costly decision for Disney and ABC. “Roseanne” returned to a viewership of 18 million in overnight ratings, an astronomical number in today’s Peak TV climate and even more so for a network comedy.

Though its numbers came back down to Earth afterward, the show still pulled more than 10 million viewers per episode by the end of the season, making it ABC’s most successful scripted series. Only two weeks ago ABC made “Roseanne” and its star the focus of its upfront presentation to advertisers, complete with Barr serenading the Madison Ave. reps with a rendition of “My Way.”

ABC executives touted the revival’s popularity as the foundation of the network’s resurgence. Across the industry, the victorious return of “Roseanne” has been credited for reviving the fortunes of the classic multi-camera format even though Chuck Lorre proved its resiliency years ago.

This is a long way of saying that doing the right thing in canceling “Roseanne” also stands to be a very expensive thing to do. And I’m not just referring to the potential economic ramifications.  ABC is now facing a scramble to reconfigure its strategy for the new season and, potentially, to repair its relationship with other producers and a slice of its audience.

All because its star couldn't keep her social media habits under control. Or as author Ijeoma Oluo succinctly put it:

A oft-cited bromide of late is that freedom of speech does not mean freedom from consequences. People have observed this whenever a person at the center of a racially-charged incident is outed for their behavior and then mourns losing their job as a result. But in general this is something that happens to people who aren’t famous, are easily replaceable and don’t stand to make their bosses millions of dollars.

The titular star of “Roseanne” cannot be replaced; although a few critics have pointed out that the stealth focus of the story is the rest of the family — Darlene, Becky, DJ and Dan — very few would sign up to watch that spinoff. Knowing this, and the entertainment industry being what it is, Disney could have easily condemned Barr, taken her at her word that she was leaving Twitter and reassured people that it wasn’t going to happen again. (Prior to the season she told critics that her children had taken away her password. Obviously she found her way around that.)

Other networks may have counted on the notion that the 10 million-plus people who were still watching “Roseanne” by the end of the first season speak more loudly than the outcry against Barr’s tweet on social media. Then again, there's also evidence that advertisers would have desired to distance themselves from the new season given Tuesday's developments.

Lest anyone be tempted to applaud Disney for taking the costly route to the moral high road, do not forget that the network was aware of Barr’s behavior from the start and decided to give her a national broadcast platform anyway.

She used that platform in part to take a shot at shows fronted by casts of color on her own network, “Black-ish” and “Fresh Off the Boat.” This, during a season in which the creator of one of those shows, Kenya Barris of “Black-ish,” was asked to pull an episode featuring a storyline concerning the rights of NFL players to kneel in protest during the performance of the national anthem at football games.

If that were the only misstep “Roseanne” made this season — if the show hadn’t bungled attempts to discuss cultural bias or all-but negated the identity of the lone black series regular character, Mary Conner (Jayden Rey) — ABC might have been able to salvage this PR nightmare and move forward.

But Barr has a history of blurting out bigoted statements, walking them back with apologies and moving forward with her career nevertheless. She’s done it to the LGBTQ community, she’s referred to Israel as a Nazi-state and even prior to the tweet that led to her show’s cancellation, she tossed out a few anti-semitic tweets concerning George Soros and Chelsea Clinton.

All of this should have given pause to series executive producer Sara Gilbert, an out-and-proud lesbian and co-host of “The Talk” on CBS who may have heard something about Barr referring to LGBTQ Americans as narcissistic on her radio show in 2007. Gilbert condemned Barr’s tweet on Tuesday, saying “I am disappointed in her actions to say the least,” but she is also the driving force that helped put Barr back on ABC in the first place.

It should have given pause to Dungey, the first African-American woman to serve as a broadcast network’s president, to see another black woman compared to an ape. Or maybe it would have if Barr hadn’t already done that five years ago, in 2013, when she referred to then-National Security Advisor Susan Rice, as “a man with big swinging ape balls.”

In most of these cases, Barr has apologized. Do it once, it’s a mistake, maybe. Do it again, and again, and it’s a pretty clear indication of how a person like Barr thinks and more to the point, what she really thinks about the woman who hired her. This was in Barr’s nature. She made no secret of it; people have been aware of her bigotry for some time.

Certainly Barr and the co-showrunners of “Roseanne” Bruce Helford and Whitney Cummings, who recently parted ways with the series, were aware of it. They went as far as to write elements of Barr’s politics into the series, making it nearly impossible to distinguish between the real life woman and the character she plays.

And though Wanda Sykes announced in a tweet on Tuesday that she would no longer serve as a consulting producer on the show, I also wonder how long she actually put up with it. Last fall she made a few publicity appearances to promote “Roseanne” as it was going into production but for the most part, she’s said more about leaving the show on her Twitter feed, and about “Black-ish,” than she’s talked about the show itself while it was on.

Now that ABC can no longer profess faith or weakly feign ignorance, now that it now longer has its surefire ratings magnet for the 2018-2019 season, Dungey and the network’s other development executives have a bit of triage on their hands. This is ABC’s first fall since 2005 without Shonda Rhimes under its umbrella; she’s left for Netflix, the streamer that also green lighted a development deal with Barack and Michelle Obama.

Murmurings that Barris may be attempting to get out of his deal with ABC and head to Netflix have been circulating since the story about yanking that “Black-ish” episode first broke. Taking a broader view, ABC also faces a fall season with many critically popular half-hours but few that come close to matching the ratings of “Roseanne.” “The Middle,” ABC’s other comedy about a working class family, is done. “Modern Family” is a hit in syndication but averaged about half of the audience Barr’s comedy ended up with by the time its finale aired.

What may smart even more is seeing “Last Man Standing,” Tim Allen’s comedy that ABC cancelled at the end of the 2017 season despite its popularity, pop up on Fox this coming fall. Then again, with Disney angling to buy Fox, it all comes back under the same roof anyway. In the immediate, ABC dealt with the mess it had on its hands in the only way that it could. But now it has a gaping hole to contend with and a bruise on its diversity record, perhaps, among some creatives. With its single season reboot of “Roseanne,” it also has an unfinished mess on its hands.

Helford even hinted that some of the first season’s shortcomings, most of which centered on “Roseanne” soft-selling Trumpism or botching conversations on race, would be handled by writing-in deeper consideration and more delicacy in season two. That won’t happen now, leaving a single season of half-measures and veiled political statements as the ending tagged on to a once-great show’s legacy. It’s a miserable way for a series go out out, death by poisonous sting. And it could have easily been avoided if ABC hadn’t ignored years worth of warnings about the dangers of giving Barr another ride.