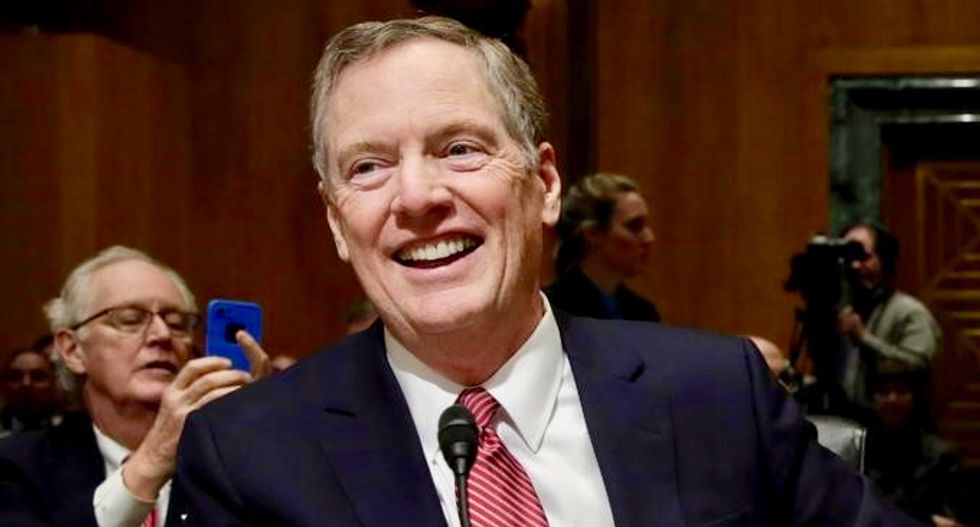 U.S. President Donald Trump’s chief trade negotiator said on Tuesday he was not looking to negotiate changes to China’s state-driven economic system in trade talks in Beijing this week but would seek to expose it to more foreign competition.

U.S. Trade Representative Robert Lighthizer told the U.S. Chamber of Commerce he viewed the talks with top Chinese officials on Thursday and Friday as the start of a long learning process for Washington and Beijing to better manage their trade differences.

Ross said earlier on Tuesday that Trump was prepared to levy tariffs on China if the delegation did not reach a negotiated settlement to reduce trade imbalances.

Speaking to CNBC television before traveling to China for the talks, Ross said he had “some hope” agreements could be reached to resolve the trade tensions between the world’s two largest economies.

But Ross and Navarro, who spoke to steel company executives in Washington on Tuesday, both said any final decision would be made by Trump.

Lighthizer downplayed the potential imposition of tariffs on China in his remarks to the most powerful U.S. business lobby, which has opposed tariffs to try to force changes in China’s trade practices.

Trump has threatened tariffs on up to $150 billion worth of Chinese goods to punish China over its joint-venture requirements and other policies that USTR says forces American companies to surrender their intellectual properties to state-backed Chinese competitors.

China, which denies it coerces such technology transfers, has threatened retaliation in equal measure, including tariffs on U.S. soybeans and aircraft.

The so-called Section 301 investigation tariffs could be imposed sometime in June after the conclusion of a public comment process.

Asked how long Trump would negotiate with Chinese officials before imposing tariffs, Lighthizer said: “We’ll see. Our list of things that are troubling is very long. ... We’ll see where we are at the end of a couple of days.”

The Treasury is also developing investment restrictions on Chinese companies to prevent them from obtaining U.S. technology through acquisitions and joint ventures. It is considering invoking the International Economic Emergency Powers Act to impose such bans.

Lighthizer said it would be “madness” for the United States to keep allowing Chinese-state backed firms to buy up U.S. technology companies, especially as China prohibits such acquisitions by U.S. firms.

He said it was in the U.S. interest to encourage China to open its economy to U.S. and other foreign firms, not only for increased sales to China’s consumers but to foster market competition in China.

Ross, in his CNBC interview, did not provide details on the Trump administration’s specific demands on China, but said: “We have a pretty good idea of what we need to come out with.”

Trump administration officials have called for a $100 billion reduction in the United States’ $375 billion goods trade deficit with China, a reduction in China’s car tariffs and more U.S. access to the Asian nation’s vast markets.

“This won’t be, suddenly in Beijing, a breathtaking release (that) everything is solved,” Ross said.