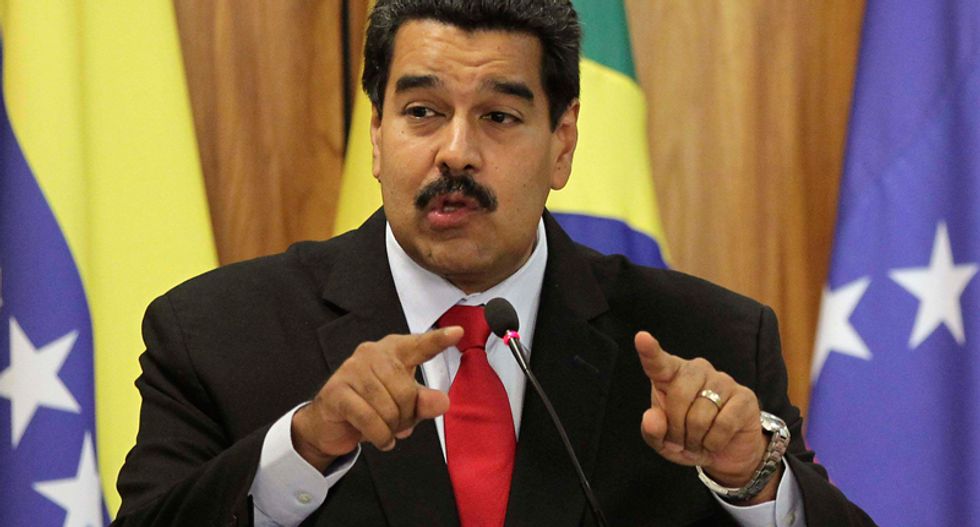 Venezuela ordered the expulsion of the top two US diplomats in the country Tuesday, charging it was the victim of a "political and financial lynching" after Washington tightened sanctions over Nicolas Maduro's re-election.

Maduro announced the expulsions in a televised speech after being officially proclaimed the winner of Sunday's election in the South American nation mired in an acute economic crisis and facing growing international isolation.

The vote was boycotted by the main opposition parties and widely condemned by the international community, including the United States, which denounced it as a "sham."

"They must leave the country in 48 hours in protest and in defense of the dignity of the Venezuelan homeland... Enough of conspiracies!" he said.

A State Department official told AFP that Washington had "not received notification from the Venezuelan government through diplomatic channels," but that if the expulsions are confirmed, "the United States may take appropriate reciprocal action."

In anticipation that Venezuela's charge d'affaires in Washington, Carlos Ron, would be expulsed, he was appointed vice minister of foreign affairs for North America.

On Monday, President Donald Trump tightened sanctions against Caracas, making it harder for the Maduro regime to sell off state assets.

"I repudiate all the sanctions that are sought against the Bolivarian Republic of Venezuela, because they harm it, they generate suffering for the people of Venezuela," Maduro said in the speech.

He promised to present "evidence" that both diplomats were engaged in a political, military and economic "conspiracy."

"We strongly reject the accusations against me and against" Naranjo, he told journalists in the western city of Merida, promising to return there even despite Maduro expulsing him.

Washington and Caracas have not exchanged ambassadors since 2010, and relations between the two countries have been tense since the late leftist President Hugo Chavez, Maduro's mentor, assumed power in 1999.

The deeply unpopular Maduro was declared the winner with 68 percent of the vote, but with a record abstention rate.

Days before the elections, 11 soldiers were arrested for planning destabilizing actions against Maduro, and they were ordered to prison on Tuesday, the Foro Penal group said.

Venezuelans are reeling under an deepening crisis, with hyperinflation projected by the IMF to reach 13,800 percent this year and dire shortages of food and medicine.

Hundreds of thousands of people have fled the country to escape the growing deprivation.

The foreign ministry earlier lashed out at the US sanctions, accusing Washington of intensifying a "criminal financial and economic blockade," which it called a crime against humanity for impeding "access to essential goods."

"We alert the international community to the threat to world peace represented by the supremacist, racist and interventionist regime that governs Washington today, inspired by the nefarious postulates of the Ku Klux Klan," the foreign ministry said in a statement.

It said US policy "promotes hatred, intolerance and political and financial lynching" of Venezuela.

Washington has previously slapped sanctions on the president and his senior aides, and banned US entities from buying any more debt from Caracas or state oil company PDVSA.

The European Union said it was also weighing new sanctions after the election was marred by "irregularities" and failed to meet international standards.

Caracas is facing increasing international isolation, with the United States, the European Union and the 14 countries of the Lima Group -- which includes Argentina, Brazil and Canada -- refusing to recognize the election result.

"Venezuela is beginning to suffer an economic boycott by the United States and its allies, and this is going to be fatal to the regime," political analyst Carlos Romero told AFP.

Maduro, a former bus driver, union leader and foreign minister, has insisted Venezuela is the victim of an "economic war" waged by the conservative opposition and external powers including the United States aimed at toppling him.

Most economists attribute the oil-rich country's economic collapse to years of mismanagement, corruption and a period of sharply lower oil prices.