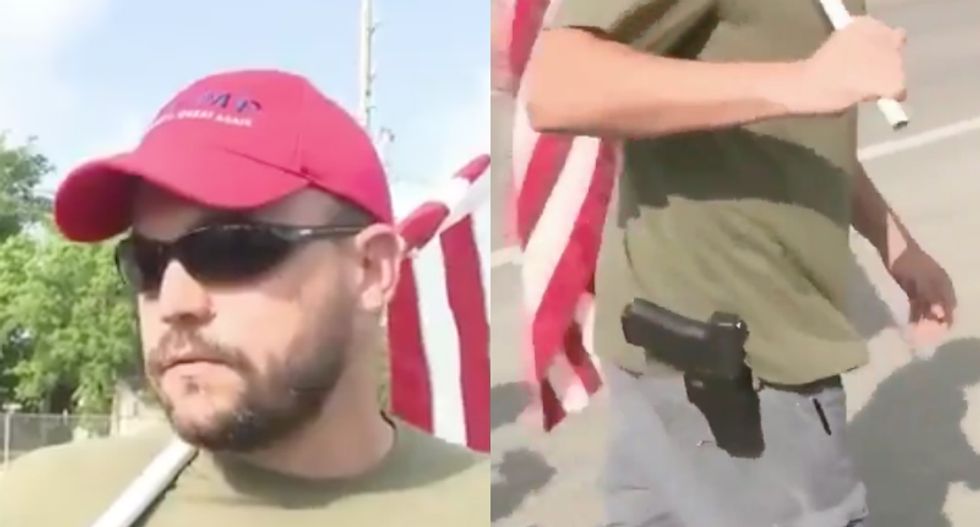 A man wearing a Trump-MAGA hat who brought a gun and an American flag to the scene of a school shooting. Images via screengrab.

A Trump supporter earned the rebuke of a fellow Second Amendment fan when he brought his open-carry pistol and an American flag to the scene of a school shooting in Santa Fe, Texas that resulted in the reported deaths of multiple students.

When asked what his first thought was upon hearing about the active shooter at Santa Fe High School, the unnamed Trump supporter said he first thought he needed to "get to the school," and then the phrase "make America great again."

He told a reporter from Houston's KHOU that he was there "offering support," and that a "god bless y'all will go a long way right now."

As he walked away, the camera panned to the man's hip to show that he had a pistol holstered on his belt — a fact that enraged another resident interviewed by the news station.

"We don't need this crap," the man continued.

'My base is going to be very angry': Trump explains what will happen if he doesn't run in 2024

Former President Donald Trump predicted this week that his supporters will become "very angry" if he decides not to run again in 2024.

Conservative radio host Hugh Hewitt asked Trump about his intentions for 2024 during an interview on Wednesday.

The Wisconsin district attorney who prosecuted Kyle Rittenhouse has one regret about the trial that ended with an acquittal.

The 18-year-old Rittenhouse took the stand in his own defense for the shooting deaths of two men and the wounding of another at a Black Lives Matter protest in Kenosha, and assistant district attorney Thomas Binger wishes he had confronted the teen gunman with graphic images of Gaige Grosskreutz “with his arm nearly blown off” and video of Joseph Rosenbaum “gasping out his least breath," reported New York State Bar Association.

Tensions within the Make America Great Again movement are expected to be discussed in testimony before the House Select Committee to Investigate the January 6th Attack on the U.S. Capitol.

Ali Alexander, who The New York Times described as a "provocateur" and "a prominent organizer of the Stop the Steal rally that drew supporters of President Donald J. Trump to Washington on Jan. 6," is scheduled to testify before the select committee on Thursday.