Donald Trump and Kim Jong-un’s big nothing summit: He went to Singapore for a giant photo-op 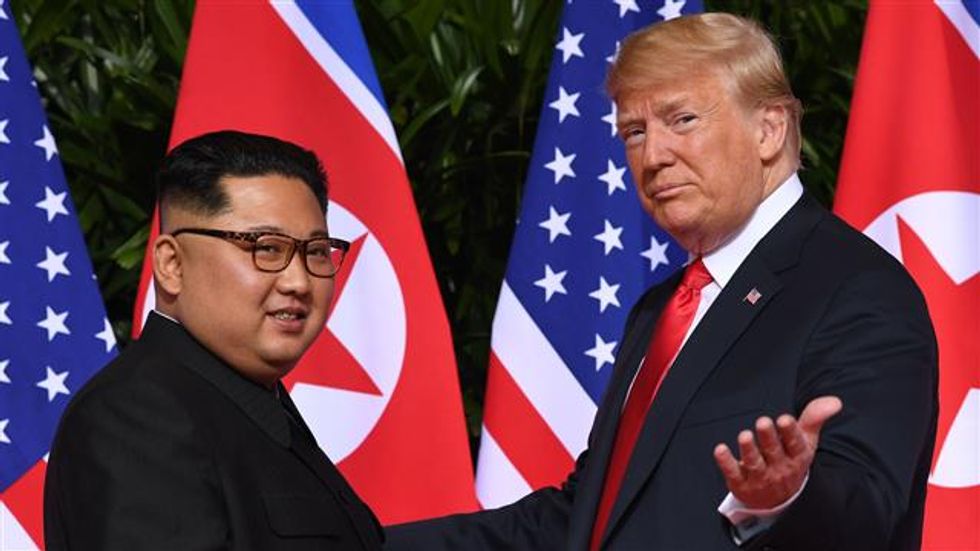 I hope most of you reading this had the good sense to turn on Netflix or catch up on your reading on Monday night (and Tuesday morning) rather than doing what I did: Watch the endless, tedious cable news coverage of the North Korea summit in Singapore. Over the course of many hours there were a few photo ops of Donald Trump and Kim Jong-un shaking hands, smiling, sitting across from each other at a table with staff, eating lunch and walking around the property together.

Trump repeatedly said that it was a "great honor" to meet with the North Korean dictator while Kim indicated that it was hard to get there but was glad they were meeting.Before anything happened at all Trump said he was sure the meeting was going to be excellent, the relationship was terrific and the summit was going to be a huge success.

Unfortunately, the lack of news meant it was a day full of gaseous punditry punctuated by some circus sideshows like former NBA player Dennis Rodman:

As I fought the boredom of listening to talking heads make the same observations over and over again, I could not help but be reminded of Trump's nuclear worldview which he expressed throughout the campaign. Knowing that he has never learned even one new thing in the last three decades, I felt a sense of dread about what was going to come out of this meeting.

Recall this comment in an April 2016 exchange with Fred Hiatt, editorial page editor at the Washington Post:

HIATT: Well I guess the question is, does the United States gain anything by having bases [in South Korea]?

HIATT: So you don’t think the US gains from being the force that sort of that helps keep the peace in the Pacific?

TRUMP: I think that we are not in the position that we used to be. I think we were a very powerful, very wealthy country. And we’re a poor country now.

He said this on CNN at roughly the same time:

ANDERSON COOPER: So you have no problem with Japan and South Korea having nuclear weapons?

TRUMP: At some point we have to say, you know what, we're better off if Japan protects itself against this maniac in North Korea, we're better off, frankly, if South Korea is going to start to protect itself, we have ...

COOPER: You would be fine with them having nuclear weapons?

COOPER: So if you said, Japan, yes, it's fine, you get nuclear weapons, South Korea, you as well, and Saudi Arabia says we want them, too?

Since he became president he has held the same view about withdrawing troops from South Korea.

In one heated exchange between the two men before February's Winter Olympics in South Korea, Kelly strongly — and successfully — dissuaded Trump from ordering the withdrawal of all U.S. troops from the Korean Peninsula, according to two officials.

So Trump came into this Singapore meeting with ideas of his own: Blow up the global security umbrella that has kept the world from nuclear holocaust for nearly seven decades and replace it with rapid, global nuclear proliferation.

Dealing with a nuclear North Korea is the problem from hell. The Kim regime has been signing agreements and reneging on them for more than 20 years as it built a nuclear arsenal and a successful delivery system. North Korea is now members of the nuclear club and must be dealt with in a new way.

In response to that, President Moon Jae-in of South Korea ran on a peace platform last year and has been the main driver of the new process of engagement with Kim Jong-un. But seeing those comments from the campaign, it's terrifying that Donald Trump is president in this moment.

The signing ceremony at the end of the summit was bizarre. Nobody knew what was in the document. Nobody in Congress or any foreign leaders were given a heads up, and everyone was expected to applaud the agreement without having any idea what was in it. And I mean any idea. The president said it was terrific, of course. Kim said they had agreed to leave the past behind and that was it until they released the text hours later. Regional allies had not even been consulted, so they were in the dark as well.

It turns out that the so-called "historic" document is nothing new. They agreed that there should be peace and that they will look for human remains of soldiers lost during the Korean war. The only relevant item was that the North Koreans reaffirmed an agreement with South Korea from April that "commits" to "work toward" denuclearization in the Korean Peninsula.

DEVELOPING: North Korea pledges to work toward "complete denuclearization," according to document signed by Kim and Trump https://t.co/pUgaBosw2s pic.twitter.com/IdUlUdYn5H

The president claimed he did all the negotiating himself. That isn't surprising, since this was actually a step backwards from earlier agreements such as the one reached in the Six Party talks in 2005, in which the North Koreans actually agreed to give up “all nuclear weapons and existing nuclear programs” and then didn't do it. In Trump's press conference he said the U.S. would suspend war games on the Korean peninsula but wouldn't withdraw its troops just yet.  He declared that war games are expensive and "very provocative." Evidently, Kim didn't have to agree to anything in return for that concession.

Trump basically achieved nothing new. It was an elaborate photo-op. As usual, the self-congratulatory press conference he gave after the summit was downright delusional. He called Kim "very talented" and described the conditions in North Korea as "rough." He admitted that China has relaxed sanctions and said he was fine with that. The strict terms the North Koreans were supposed to agree to are nowhere to be found, but it's all good because he's so much better than all the loser presidents who actually got tougher deals signed. Still, considering all those comments he made during the campaign, it could have been much worse.

I have written before that any day we are not in a nuclear crisis with North Korea is better than the alternative. In that regard, the Singapore summit was a success. But after Trump's aggression against U.S. allies at the G7 in Quebec and then, in his own words, the "bond" he formed with the North Korean dictator just days later, nobody should be reassured. It looks as though the more consequential of the two big meetings was the first one, not the second.