For families who have already been separated, Trump's policy change doesn't guarantee reunification 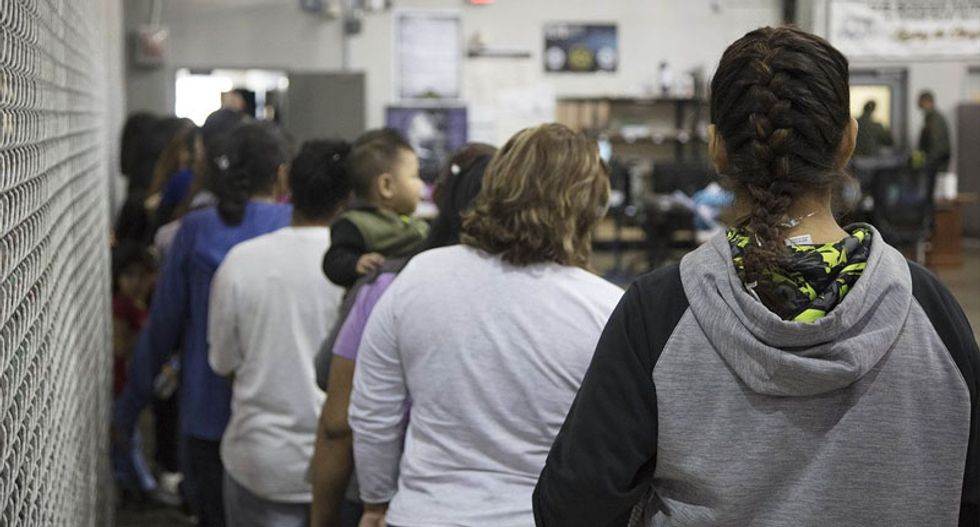 They crossed the border as families. Now, as some parents face the prospect of being sent back across it, many have no way of knowing how much deeper into the United States their children may have been sent without them — maybe all the way to north to New York or Michigan, or maybe just a few miles away in Texas.

The Trump administration has already reversed course on a widely-panned “zero tolerance” policy that resulted in separating more than 2,000 migrant children from their parents after they crossed the border together illegally; the president said Wednesday that families will no longer be split up. But in many cases, attorneys and advocates say, the damage is already done: Even if no more families are separated, there’s not yet a clear path for reuniting those who already were.

Under a new Trump administration policy, families caught crossing the border illegally were split up, parents and children separated and their cases swallowed up by different federal agencies, each its own bureaucratic maze. Parents have been prosecuted by the Department of Justice and then held in detention centers run through the Department of Homeland Security; meanwhile, their kids are being held in private shelters paid for by the Department of Health and Human Services.

Now, as the policy changes play out, it’s not clear how the agencies will come together to reunite the kids with their parents — especially as many parents face deportation to their home countries.

“There is absolutely no plan to reunite these families,” said Sandy Santana, executive director of Children's Rights, a national advocacy group. “These two bureaucracies aren’t always communicating with each other, so it’s not always clear if the children are being tracked.”

Immigration attorneys are helping some families make the case for asylum or postpone an order for deportation until they can find their children. Three parents have even filed a lawsuit demanding they be reunited with their children, one of them just two years old. But for many families — especially those without an attorney, those with children too small to remember their parents’ full names and phone numbers, or those who speak little English — reunification is at best a remote possibility.

“That is a really grave problem and a problem this administration didn’t think through when they started this inhumane policy,” said Barbara Hines, the former director of an immigration clinic at the University of Texas School of Law.

While children are guaranteed extra legal protections, many parents detained at the border are quickly deported as “expedited removals,” Hines said. Some parents may seek a fast deportation in the hopes that it will help them see their children sooner, but there are few guarantees that that will improve their odds of reuniting.

A Health and Human Services official told The New York Times on Wednesday that children will not immediately be reunited with their families while the adults remain in federal custody. And the various agencies involved have yet to lay out a clear infrastructure for bringing together parents and children who may be many states and many hundreds of miles apart. Instead, officials offer platitudes.

“Hopefully, they’ll get you to her,” a magistrate judge in McAllen told a desperate migrant woman who asked what would happen to her daughter at a sentencing hearing this week. “Ideally, the families are reunited,” said U.S. Attorney Ryan Patrick, the federal prosecutor in South Texas who takes his cues directly from Jeff Sessions’ Justice Department.

“HHS, they’re the ones who take care of the children. DHS is taking care of the parents once the criminal portion [is over],” Patrick, the son of Texas’ lieutenant governor, told conservative radio host Chris Salcedo Monday morning. “[The agencies are] supposed to put them back together.”

“Have You Been Separated From Your Child(ren)?”

It’s not clear, though, how they get put back together. Lawyers handling such cases and media reports describe a hectic, case-by-case process in which there’s no guarantee of reunification. Some parents rely on the whims of generous immigration detention officers; in other cases, they have been deported without them.

The government assigns every undocumented immigrant an “alien number,” but parents and children may not know each other’s or even their own. Detention centers holding parents have posted flyers asking, “Have You Been Separated From Your Child(ren)?” in both English and Spanish. The flyers list a phone number for parents to call, but the logistics are difficult; parents can’t receive calls back in detention facilities without planning in advance.

“ICE has really nothing, no policy, no program to really find the children. The parents are given a piece of paper that says if you’ve been separated from your child, as if you lost your child at the grocery store, here’s a number to call,” Hines said.

And once parents have left the United States, it can be very difficult for them to reach their children.

“If they do charge forward and deport these parents and they’re actually out of the country, I don’t believe they have any idea and process in place for how they’re going to think about reunifying that child,” said David Thronson,a Michigan State University law professor who has represented hundreds of immigrant children.

One possible consequence of the "zero tolerance" policy, Thronson believes, is an influx of children into the federal foster care system. When children are apprehended at the southern border, they are sent to short-term shelters where they may live with as many as 1,000 other kids whose parents were detained by immigration authorities. The Department of Health and Human Services is responsible for finding a home for the child, often with a family member or friend, but sometimes in a foster family.

When children arrive at the U.S.-Mexico border unaccompanied, lawyers said, the federal government is more likely to arrange a home for them with a blood relative or family friend.

But the fate of the current crop of children — who arrived with family members but were separated from them — is far less clear. By detaining a child’s parents, immigration officials may have ruled out a family placement for many children. If the parent is deported, reuniting family members in their home country can be an extremely thorny task. Federal anti-trafficking laws require children to be repatriated safely — no easy task in countries marred by conflict.

All told, advocates said, Trump’s promise that Wednesday’s executive order will “keep the families together” at the border does little for the families who have already been torn apart.

“That toxic stress can have lifelong consequences, especially for the children,” Santana said. “This a human rights crisis.”

"What are the steps now?"

As evening turned into dusk on Wednesday night, more than 200 people gathered around the main wooden gazebo in downtown McAllen's Archer Park — just blocks from the federal courthouse where migrants are prosecuted for illegal entry. They waved makeshift flags and proudly held signs with phrases like "Can you hear the children crying?" Many young children attended, too; one little girl held a sign that read "Praying for kids like me. Be nice to them."

The religious and nonprofit leaders who organized the gathering were careful to call it a vigil, rather than a political rally. Alex Stehn, a philosophy professor at the University of Texas-Rio Grande Valley who has lived in McAllen since 2010, said he was drawn to the event because it was meant to unite people from many different religious and political backgrounds.

"I can't really imagine any religious person that would support a policy of separating children from their families. At least get people together who agree on that, if nothing else," said Stehn, who does not identify with a particular religion but labeled himself a "hard-to-describe spiritual person."

Claudia Colunga, who teaches mathematics to middle schoolers and is from the nearby town of Alamo, said she heard about the vigil during her church's mass service on Sunday. It was the first time she'd attended a political rally, she said, and it probably wouldn't be the last.

"As a mother, I just feel like I can't imagine not knowing what is happening to my own child," said Colunga, who attended the vigil with her husband and 11-year-old son.

She said she was encouraged to hear that President Donald Trump was taking steps to rescind the policy. But she was also skeptical. The executive order, she said, is "not just a piece of paper that gets to get signed and we forget about it. What are the steps now in order to get these families back together?"

BY EMMA PLATOFF AND EDGAR WALTERS, THE TEXAS TRIBUNE

Neena Satija contributed to this report.