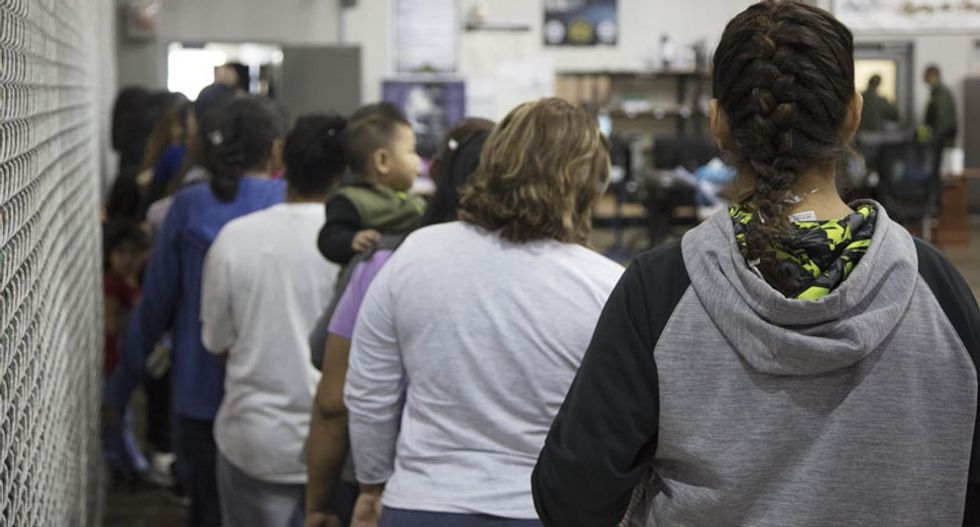 Migrants at a detention facility in McAllen, Texas (David Begnaud/CBP)

In recent days, millions of Americans have seen the shocking, heartbreaking images of children—crying, screaming, hysterical children—being ripped from the arms of their parents and sent away to a newly constructed camp in the Texas desert. So many of us have been justifiably outraged by the news. Here are children, arriving with their parents after a perilous journey, seeking asylum from the life-threatening conditions in their home countries, being terrorized by agents of the United States Immigration and Customs Enforcement Agency (ICE). And all of it part of a deliberate policy implemented by Donald Trump, Jeff Sessions, and Stephen Miller in their ongoing effort to re-build a white, Christian America through the exclusion (in this case through terror) of all those they deem to be outsiders.

Unfortunately, after the bloody twentieth century, it’s no surprise that man’s capacity for evil extends all the way to the violent assault on children—the most innocent and vulnerable among us. What does it mean, then, for a society to sink so low as to permit the forced separation of families whose only “crime” is seeking peace and freedom in America? What does it mean for a society to allow for a policy of violence against children? How could a country punish children for the decisions of their parents—decisions that, by any standard, are unimaginably difficult?

They are the kinds of impossible decisions Holocaust scholar Berel Lang has called “choiceless choices.” And looking back to the Holocaust and the decisions that Jews faced then, perhaps we can gain further insights as to why the current policy of the United States government is so unimaginably cruel.

When Jewish families arrived at Auschwitz, they walked past a group of doctors who, in the blink of an eye, determined their fate. Men and boys strong enough to work they waved one way, while women and small children they sent in a different direction—to the gas chambers. Family separation preceded family destruction.

In The Drowned and the Saved, Auschwitz survivor Primo Levi tells the story of a young girl who miraculously survived the gas chamber and, at least for a brief time, was kept alive by the Jewish workers who had found her, before ultimately being shot by a German guard. The story is a tragic reminder of all those children who were murdered by the Germans in the Holocaust.

The number six million is indelibly linked to the Final Solution. But there’s another number that is also staggering in its horror: one million. That is the number of children murdered in the Holocaust. The stories of those who perished and of those who survived and the choiceless choices involved are all—like the stories of the parents who fled and the children taken from them and placed in America’s own concentration camp—extraordinarily heartbreaking. And it began well before the start of the Final Solution.

Only days after Kristallnacht in November 1938, the British government approved a plan for taking in unaccompanied children under the age of seventeen from Germany and Austria—what became known as the Kindertransport. Now thousands of parents found themselves in the unimaginable position of having to decide whether or not to send their children to a foreign country alone, possibly never to see them again. As we now know, they turned out to be truly life and death decisions.

Consider, for example, the case of Lory Cahn. Her parents took her to the station, watched her board the train, and stood under her window. As the train started, her father would not let go of her hand. He held it and ran alongside, finally pulling her from the train. As a result of that decision, Lory Cahn did not go on the Kindertransport. Instead, she and her family were sent to Theresienstadt—the “model” concentration camp in the former Czechoslovakia, which the Nazis used for propaganda purposes.

Once in the camp, she was called to the railroad station where an SS man would call out a list of names. Those on the list got on the train. The first time she went, her name was not called. She returned to the barracks. This happened several more times over the next two weeks. Soon, the agony of repeatedly saying goodbye to her parents became too much. The next time she was called to the station, she asked the SS man to let her on the train. She didn’t know where it was going. And even if she did, the name Auschwitz would have meant nothing to her anyway. Remarkably, her decision did not prove fatal. Before her liberation, however, she had experienced eight different camps and emerged weighing just fifty pounds. What if her father had not made that decision back on that train platform seven years earlier?

Of course, the vast majority of Holocaust victims were from Eastern Europe. They, too, faced impossible decisions. In Lithuania, newly acquired in 1940, Stalin worked to ethnically cleanse the land, deporting millions of Poles and Jews into the Soviet interior. The final deportation occurred in June 1941. It was then that an officer of Stalin’s secret police—the NKVD—visited the apartment of a young Jewish woman and her child who were on the list for deportation. The woman begged him to allow her to stay, but he refused. She asked whether he would take just her and leave her child behind. He agreed and she left her child with a neighbor while she went off on what she expected to be a fatal journey. But at least her child would survive. Instead, only days later Hitler began his invasion of the Soviet Union. Within a week his troops were in Lithuania and the child’s fate was sealed. What seemed at the time to be the best choice turned out to have been horribly wrong as she was deported to safety, beyond Hitler’s grasp, while her child fell into the clutches of Nazi murderers. She survived. Her child perished.

Then there is the case of Romanian Jews in the Czernowitz ghetto. In early 1942 some had the opportunity to flee by ship to Palestine. A man named D’Andrea gave them this chance. Many only had enough money for one ticket. Then came the decision. Don’t buy the ticket and risk the likely death of the entire family? Or buy one ticket and split up the family? But then, who should go—the younger child; the stronger child? Perhaps the smarter one who had a better chance to survive?

How can a parent possibly make such a decision? And what if that one child you selected doesn’t make it? What if—as was the case with the Struma in February 1942—the ship was struck by a Soviet torpedo and sunk in the Black Sea, killing all but two of the 769 people on board? Writing more than seventy years later, the grandson of one of the people in that room with D’Andrea described his father’s thinking. “You assume that you face certain death…. So, you pick one so that he will survive. This is an act of reason. It is an act of sick reason. But this act of reason gets undone, reversed, made ridiculous by a simple fact: The boat sinks, the chosen survivor dies and those who had been condemned to death, we live. Or do we?”

It’s hard to put into words the enormity of what Europe’s Jews faced during the Holocaust. The decisions they had to make were unimaginably difficult. Leave one’s home, the only home one has ever known; send your child away to another country alone; be deported deep into the Soviet Union—with your child or without; enable one family member to leave the ghetto, but which one? These are only a few of the decisions that Jews had to make in the extraordinary environment of the Holocaust. Decisions they were forced to make because the United States and others had decided that Jews did not belong in their country; they were not a part of America; they could never be part of America. And this was a conscious choice.

The fundamental problem with nationalism is that entry into the country is open to a limited group of people. Deciding who is a member of the nation, who is in and who is out, is a decision to limit the boundaries of one’s moral universe to encompass only those of your group. All those who are within that moral boundary are of concern to you; they are to be protected. All those who are outside that boundary—outside the national or racial community—are of little or no concern. If anything, they represent a potential threat that must be eliminated. But the farther the boundary of your moral universe extends, the more people who fall within it, the more people whose fate is of concern to you. In the 1930s, Jews found themselves largely outside the moral universe of too many people, and that helped seal their fate.

The question we need to ask ourselves today is, where are the children, those innocent children brought to this country by parents desperate to escape horrific conditions at home, desperate to risk their lives to find a better life in America? Where are they located in relation to our moral universe? Is ours extensive enough to include them and therefore compel us to help them? Or will we close our doors again—and in the process terrorize these children, tearing them from the arms of their parents, perhaps never to see them again—as this new generation of refugees grapples with its own choiceless choices?

Richard E. Frankel is an Associate Professor of history at the University of Louisiana at Lafayette.

Gun violence has rocked the first three weeks of Eric Adams' tenure as mayor of New York, piling pressure on the ex-cop to deliver on his promise to improve public safety in America's largest city.

A shooting Friday in the neighborhood of Harlem left one police officer dead and another in critical condition.

Waving signs denouncing President Joe Biden and calling for "freedom," several thousand people demonstrated in Washington Sunday against what some described as the "tyranny" of Covid-19 vaccine mandates in the United States.

Speaker after speaker -- including notorious anti-vaxxer Robert F. Kennedy Jr., who compared vaccine mandates to the Holocaust -- took to the microphone in front of the white marble Lincoln Memorial to decry the rules.

I had just finished an interview with Kimberly St. Julian-Varnon when I saw a clip of last night’s Tucker Carlson show. The segment was about Ukraine at the center of tensions between the US, NATO and Russia.