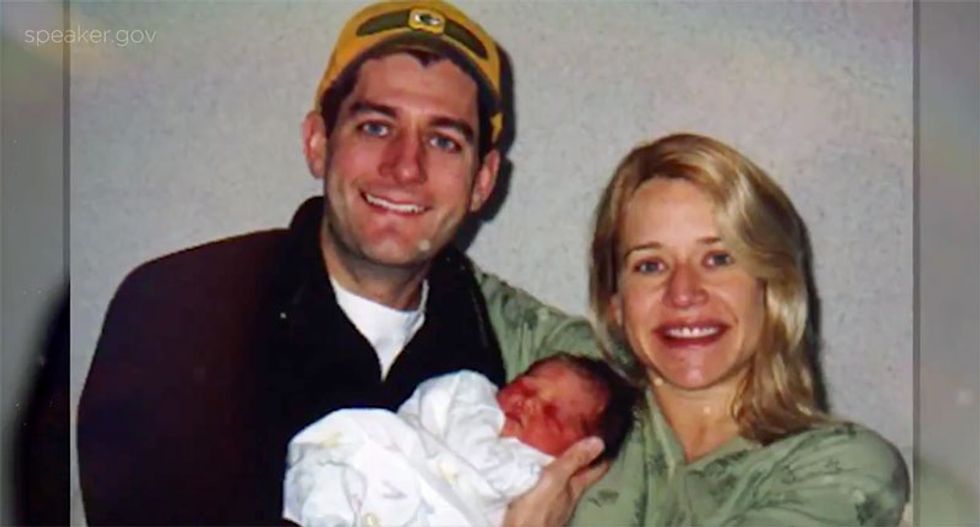 House Speaker Paul Ryan (R-WI) was soundly scolded on the internet after wishing "all of the dads" a happy Father's Day as Republican President Donald Trump separates families at the border.

Speaker Ryan is a father of three children.

"My life changed the day I became a father. Liza, Charlie, and Sam are my highest priority," Ryan tweeted. "Wishing all of the dads out there a happy early Fathers Day."

The ensuing uproar was quick and passionate.

"As a father who clearly cares for his children, Speaker Ryan should think of the agony that immigrant fathers are experiencing as their children are torn away from them due to the Trump Admin's heartless policy and congressional Republicans' complicity," noted political scientist Miranda Yaver.

"Paul Ryan is wishing a happy Father's Day to all the dads out there, except those who may be seeking asylum in this country and have had their young children ripped from their arms," argued Brian Fallon. "Those dads get Paul Ryan's cowardly silence."

"Except dads seeking asylum. In those cases, you are sitting by while this administration rips their children away and detains them," noted Think Progress editor Judd Legum. "Those fathers will not be having a Happy Father's Day."

"Tell it to the dads who’ve had their kids taken from them by the president to gain leverage in congressional negotiation," Vox writer Matthew Yglesias urged. "Visit one such dad, look him in the eye; and tell him how much your life changes and what a priority Liza, Charlie, and Sam are."

"History will remember your inaction. I will happily teach it," a fifth grade teacher promised.

You really are a spineless, tone-deaf jackass. How dare you boast about your 'fatherhood,' while supporting a policy and an administration that is tearing families apart," Christine Fair suggested. "Those children will suffer permanent damage. You should be working to change this policy."

"F*ck you and your shitty Vichy GOP that will go down in history for enabling the demise of American democracy," she added.

Here are some of the best additional comments on Speaker Ryan:

@SpeakerRyan As a father, how do you feel about the fact that babies who are still breast-feeding are being forcibl… https://t.co/rsU7H3Znrn
— Mangy Jay (@Mangy Jay) 1529173645.0

@SpeakerRyan I'm sure that father that killed himself when his kids were taken at the border felt the same way once… https://t.co/edGFlj4krU
— Constance Miller (@Constance Miller) 1529174233.0