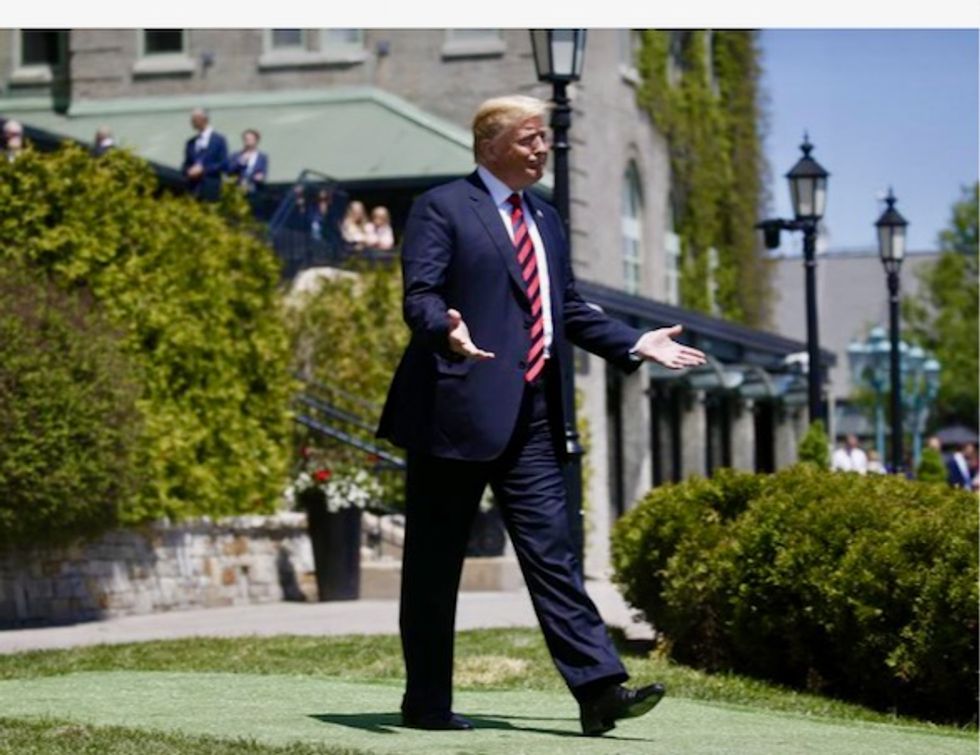 U.S. President Donald Trump held out an olive branch in his feud with National Football League players on Friday, asking them for recommendations as he considers pardoning several thousand people who may have been unfairly treated by the criminal justice system.

But civil rights activists were skeptical of Trump’s gesture, given his repeated use of a controversy around the national anthem at NFL games to stoke the country’s culture wars, and his fraught relationship with the African-American community.

Trump has been highly critical of NFL players who have protested the fatal police shootings of unarmed black men and systemic inequities by kneeling during the playing of the national anthem at games.

On Friday, speaking to reporters before leaving for a Group of Seven summit in Canada, Trump challenged those players, the majority of whom are African-American, to advise him on employing his pardon power. He said his staff was examining some 3,000 cases of people who might deserve clemency.

“I am going to ask all of those people to recommend to me, because that’s what they’re protesting - people that they think were unfairly treated by the justice system. And I understand that,” Trump said. “They’ve seen a lot of abuse and they’ve seen a lot of unfairness.”

This week, Trump disinvited the Super Bowl champion Philadelphia Eagles team from attending a White House ceremony because the majority of players were going to boycott the visit. The president used the occasion to again blast protesting players who last year did not stand for the anthem.

“His suggestion that he might bring NFL players into the pardon process must be viewed as nothing less than a cynical, self-serving ploy to create a photo op with NFL players, many of whom have made it clear that they would not be caught standing downwind from him, much less next to him,” said Harry Edwards, a sociologist and longtime civil rights activist at the University of California at Berkeley.

The NFL and NFL Players Association did not respond to requests for comment on Trump’s remarks.

Trump has been increasingly keen to use his presidential pardon power. This week he commuted the sentence of a 63-year old African-American woman, Alice Marie Johnson, serving a life sentence for a first-time drug offense. He has also pardoned the late boxer Jack Johnson, the former sheriff of an Arizona city, Joe Arpaio, and ex-White House aide Lewis “Scooter” Libby.

“This is just another attempt to divert attention and, of course, it places Donald Trump as the master of everything, just appeal to me personally and I’ll let your friends out or maybe I will pardon them,” said Jeffery Robinson, deputy legal director of the American Civil Liberties Union.

Trump also said on Friday he was looking into pardoning Muhammad Ali. A lawyer for the estate of the late African-American boxing legend responded that no pardon was needed since Ali’s conviction for resisting the draft during the Vietnam War was later overturned by the U.S. Supreme Court.