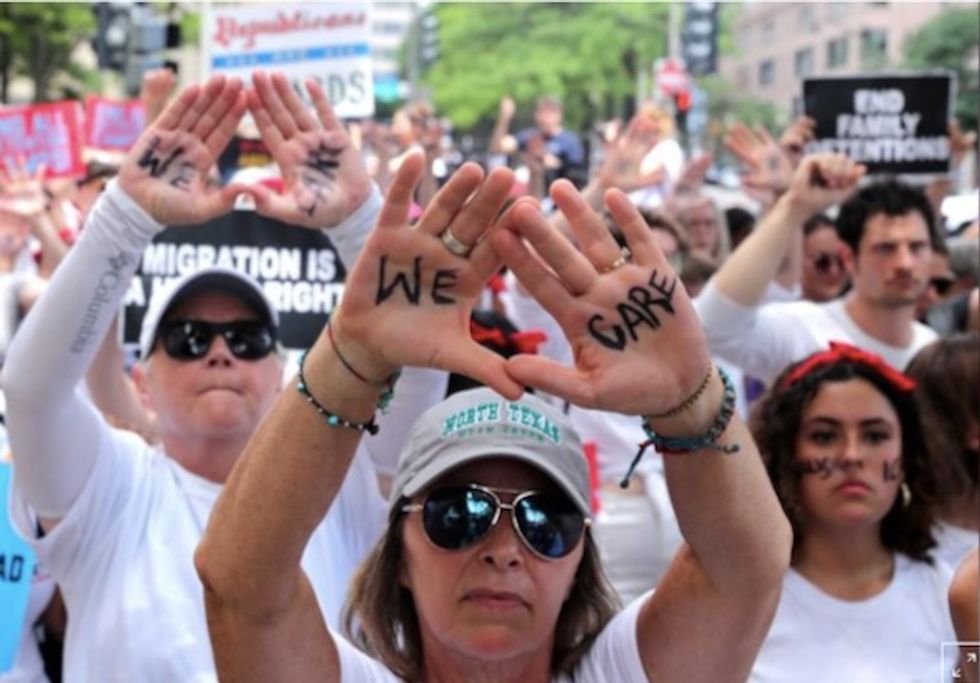 Several hundred activists gathered for an act of “mass civil disobedience” in the U.S. capital on Thursday ahead of weekend protests across the country against the Trump administration’s immigration policy.

“Say it loud, say it clear, immigrants are welcome here,” the crowd of about 500 protesters, including many white-clad women, chanted as they began marching down Pennsylvania Avenue toward the U.S. Department of Justice.

Women’s March, a movement that began when U.S. President Donald Trump was inaugurated in 2017, then spread internationally, has called on women to risk arrest at Thursday’s protest.

As the marchers passed the Trump International Hotel, which is run by the president’s company, they chanted, “Shame! Shame! Shame!”

Some organizers said they would risk arrest by ignoring any orders to disperse that the Capitol police might issue once their march arrives at the U.S. Congress.

The Women’s March demonstration is part of a wave of actions against Trump, whose administration began seeking in May to prosecute all adults who cross the border without authorization.

Consequently, more than 2,000 children who arrived illegally in the United States with adult relatives were separated from them and placed in detention facilities or with foster families around the country.

The policy led to intense criticism in the United States and abroad. After several days, Trump signed an executive order that would let children stay with their parents as they moved through the legal system. The order still faces legal challenges.

Loretta Fudoli took a bus to Washington from Conway, Arkansas, to join Thursday’s protest. She said she had been arrested at demonstrations three or four times since she became politically active following Trump’s election.

“Their parents shouldn’t even be locked up,” Fudoli said. “This is not a bad enough crime to lock them up and take their children away.”

Most of the children who had been separated from their families before the order was signed have not yet been reunited with them. The White House has also said the order was not a long-term solution and called for Congress to pass immigration reform.

Larger protests are being planned for Saturday in Washington, D.C., and cities around the country under the banner of #FamiliesBelongTogether.

Trump’s critics have blasted the executive order he signed allowing children to stay with their detained parents, saying incarceration of an entire family is also wrong.

“When we were advocating to keep families together and end family separations, we were not advocating for family incarceration,” said Linda Sarsour, one of the leaders of the Women’s March. “Camps for children is just as wrong as camps for children and adults.”