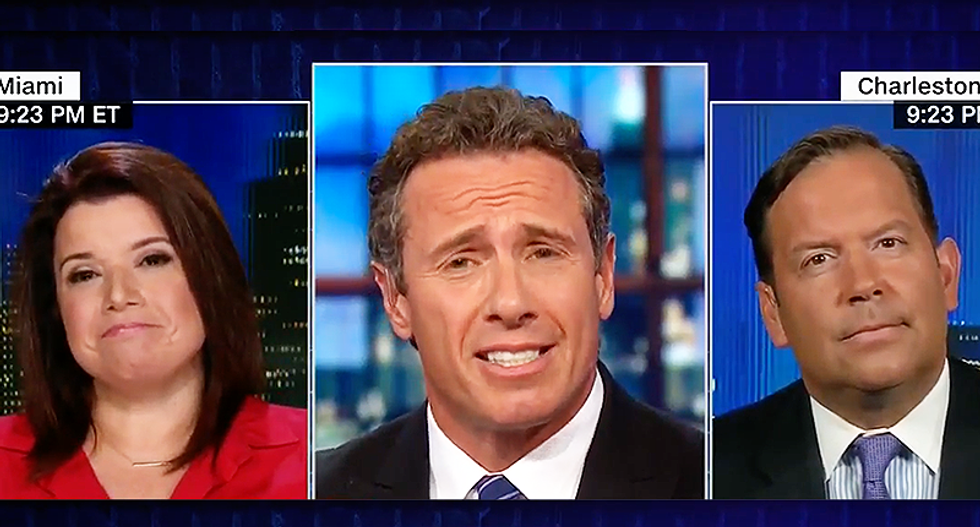 Cuomo asked him to explain President Trump siding with Vladimir Putin during their summit.

"So Cortes, let's do one of your favorite things to do. Let's play the 'if Obama did it' game. If Obama had that list of accomplishments over the last seven days, you wouldn't even use his last name. You wouldn't use his first name. You would only call him by his middle name. All you'd be saying is Hussein all the time because you would believe that somehow he had some type of nefarious connection and that's what it was all about. How do you justify it?" Cuomo asked.

"I wouldn't be saying that," Cortes responded. Listen, as much as I disagree with his policies I would never question his patriotism and his love of our country."

Cortes went on to try to explain the real problem. "I really believe here's what's going on with Ana Navarro, and with a lot of people on the left right now, is this has become the birtherism of the left," he said.

But before he could finish, Republican strategist, Ana Navarro, fact-checked him for calling her a Democrat.

She continued: "I have supported every Republican that's run for president. I will tell you today that Ronald Reagan, who had the strength of his convictions when he was confronting Russia during the Cold War. Ronald Reagan would be rolling over in his grave today if he saw the behavior of Donald Trump and this administration and he saw the number of so-called Republicans who turned the other way and somehow find a way to excuse this inexcusable behavior."

On Wednesday, writing for MSNBC, analyst Steve Benen broke down the significance of former Trump White House Chief of Staff Mark Meadows agreeing to cooperate with the House committee on the January 6 Capitol attack.

"When Trump tried to hold onto power despite losing the 2020 election, Meadows played an especially pernicious role in the scheme," wrote Benen. "It was Meadows, for example, who made a surprise visit to Georgia shortly before Christmas, checking in on an election audit after his boss leaned on local officials to help him. Around the same time, Trump's top aide repeatedly pushed federal law enforcement to investigate unfounded conspiracy theories — some of which were quite weird."