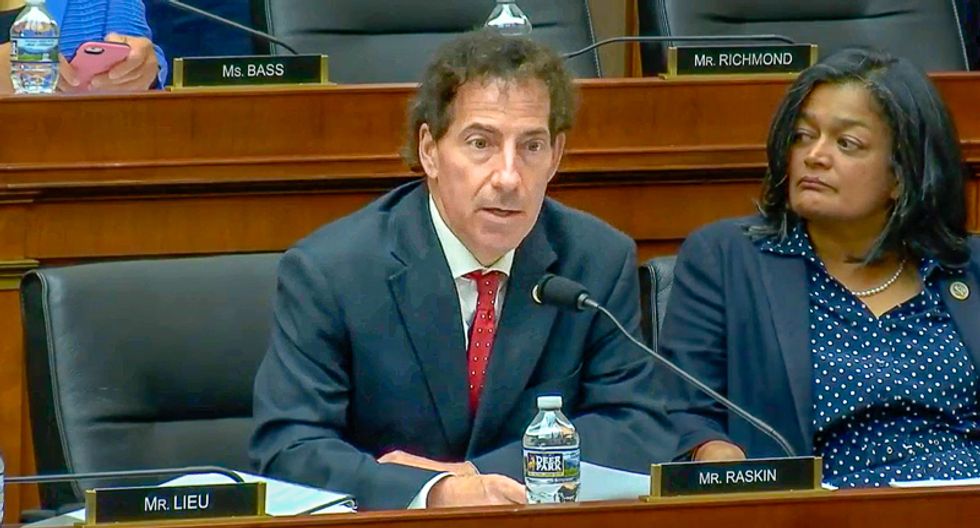 Rep. Jamie Raskin (D-MD) on Tuesday slammed House Republicans for holding a hearing on social media bias against conservatives instead of addressing President Donald Trump's recent meeting with Russian President Vladimir Putin, which has been called treasonous by political pundits.

At a House Judiciary hearing, ranking member Raskin opened his remarks by dismissing the notion that Facebook and other social media platforms had censored conservative voices.

"Clearly the majority would prefer to focus on made up threats -- fabricated, phony and inflated threats -- instead of the real threats that are facing the United States of America," Raskin began. "So today, we resume consideration of the entirely imaginary narrative that social media companies are biased against conservatives."

"Companies -- I should add -- whose platforms were used to spread vicious Russian propaganda that helped to elect Donald Trump," he said.

Raskin noted that Republican leadership on the committee had prevented Democrats from calling a witness of their own.

"This continues the majority's outrageous assault on the committee's standard rules, conventions and practices," Raskin observed, asking to place a letter in the record in protest of the majority's actions.

"On what grounds?" Raskin retorted.

"Every bit of the discussion you're having is outside the fair decorum of this body!" Issa exclaimed.

Issa, however, eventually agreed to drop his objection so that Raskin could proceed.

"The majority intends to pick up where it left off with [Trump supporters] Diamond and Silk,"the Maryland Democrat continued. "And to dedicate one of the last working days before the five-week August recess to this conservative fantasy instead of examining a long list of real and pressing issues facing America, beginning with the crisis caused yesterday by President Trump's abject humiliation before the eyes of the world in his cooperation with Vladimir Putin, and his choosing Putin's narrative over that of the U.S. intelligence community."

Raskin went on to lambaste Republicans for pushing a "conspiracy theory" about bias on social media despite the fact that the party controls the federal government and many state governments.

"We continue to go down a road of pure fantasy," he remarked. "There is no evidence to back this specious claim that social media companies intentionally target conservative content for disfavored treatment because of their political ideology."

"Moreover," Raskin concluded, "even if there were, it would be their right as private companies to do so, just like Sinclair and Fox News have a clear ideological bent and clearly promote their own form of censorship on their own media platforms."