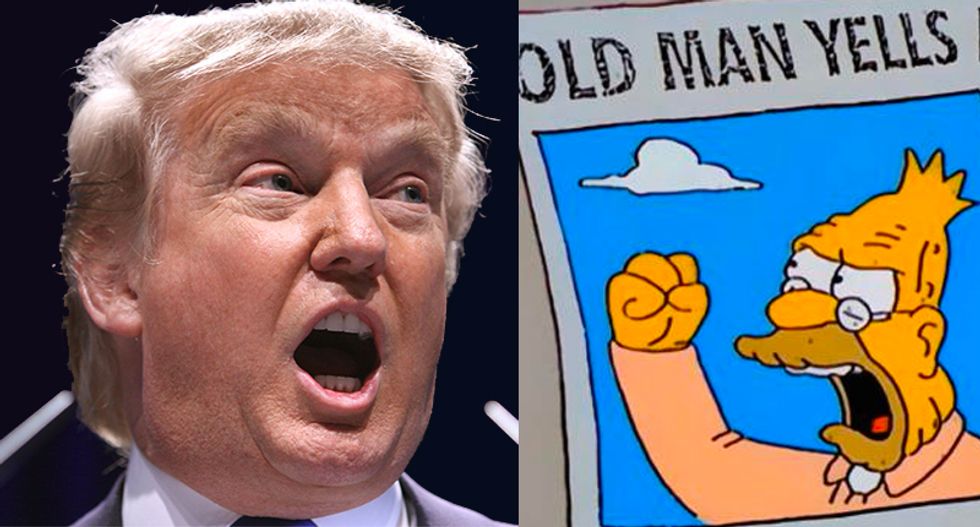 President Donald Trump started his Thursday morning by comparing immigration to telling people to get off his lawn. The comment has become a meme used by young people to mock angry old men screaming at them.

CNN host Brian Stelter also noted the "fun fact" that the series of tweets on immigration marks the first time the president has called something "insane" since being elected to the presidency.

Fun fact: This is Trump's first tweet calling something "insane" since he was elected president. https://t.co/8fBiTZUB2d
— Brian Stelter (@Brian Stelter) 1530800971.0

Some immediately reacted to what they called an example of the president's cruelty. Others were quick to post their own gifs and memes of angry, elderly people and troll the president. You can see the best of the best below:

@realDonaldTrump If people who had been brutalized and were in fear for their own & their children’s lives were sta… https://t.co/eHrDclT6m9
— ThirtySixWitches (@ThirtySixWitches) 1530801847.0

@realDonaldTrump If someone is standing on my front lawn the first thing I say is “how may I help you” I don’t say OUT
— Andrea Wright (@Andrea Wright) 1530801951.0

@realDonaldTrump But if they were on my front lawn, I would invite them in for lemonade and see about getting them more help.
— Sharon Madden (@Sharon Madden) 1530801918.0

@realDonaldTrump "And stay off my lawn!!!" Absolutely the American Way! Great thing to say on the Day After Indepen… https://t.co/iVuPfM8M4T
— Brent Bourgeois (@Brent Bourgeois) 1530803166.0

@realDonaldTrump What if the person standing in my front lawn was a woman with a black eye and a crying child?
— Skip Kraiss (@Skip Kraiss) 1530801870.0