'Nothing short of treason': Dem leader says impeachment is on the table 'once we take control of the House' 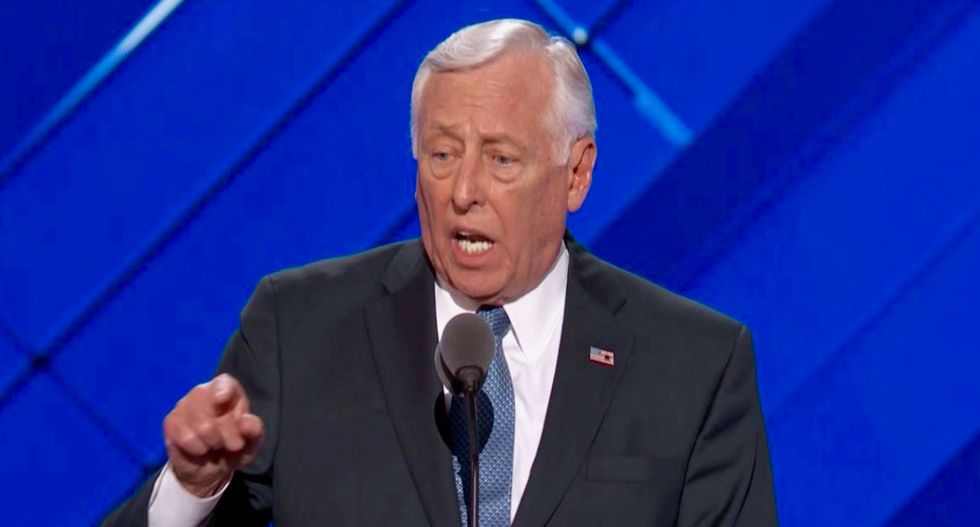 The number two Democrat in the U.S. House of Representatives argued on Tuesday that President Donald Trump's meeting with Russian President Vladimir Putin was "nothing short of treason."

During a press briefing on Tuesday, House Minority Whip Steny Hoyer (D-MD) said that he agreed with former CIA Director John Brennan's assertion that Trump committed treason by publicly siding with Putin over the U.S. intelligence committee's assessment that Russia interfered in the 2016 election.

According to Fox News reporter Chad Pergram, Hoyer called impeachment a "distraction," and he argued that the issue should be tabled until "we take control of the House back."

Read some of Hoyer's remarks below.

Hoyer on Trump remarks in Finland: Yesterday was a dark day..It was a Neville Chamberlain-like moment
— Chad Pergram (@Chad Pergram)1531839933.0

Hoyer on Trump remarks In Helsinki: I agree with (former CIA Director) John Brennan. It was nothing short than treason
— Chad Pergram (@Chad Pergram)1531840027.0

Hoyer on Trump meeting with Putin: The president’s performance was a disaster
— Chad Pergram (@Chad Pergram)1531840076.0

Hoyer says Trump’s remarks were “nothing short or treason.” Says impeachment now would be “a distraction.” Says the… https://t.co/lrTgUyQvVH
— Chad Pergram (@Chad Pergram)1531840811.0

Hoyer, on since he believes the president committed treason, should be subject to impeachment: At this point and ti… https://t.co/BBBlpVxf1t
— Chad Pergram (@Chad Pergram)1531840919.0

Hoyer on if not pursuing impeachment fails to adequately address concerns by progressives in the Democratic party:… https://t.co/hxZOcKxlbn
— Chad Pergram (@Chad Pergram)1531840968.0

Hoyer on why not seeking impeachment or other sanctions of the President now: There will be time enough to address… https://t.co/8QzZBMu8xe
— Chad Pergram (@Chad Pergram)1531840988.0

Hoyer on why not seeking impeachment or other sanctions of the President now: There will be time enough to address… https://t.co/8QzZBMu8xe
— Chad Pergram (@Chad Pergram)1531840988.0