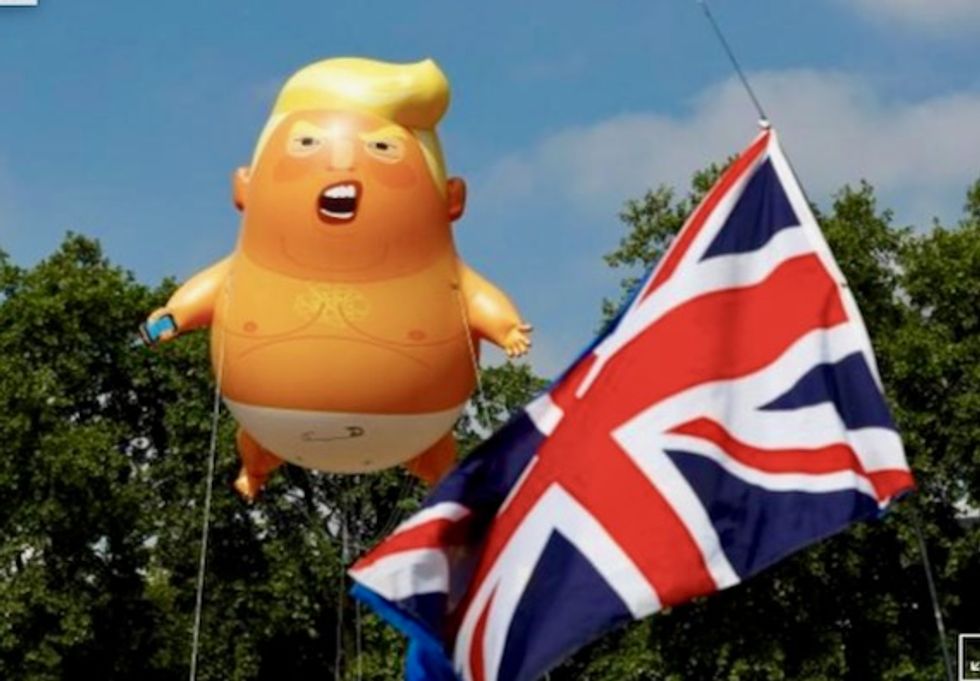 Demonstrators float a blimp portraying U.S. President Donald Trump, next to a Union Flag above Parliament Square, during the visit by Trump and First Lady Melania Trump in London, Britain July 13, 2018. REUTERS/Peter Nicholls

A blimp depicting Donald Trump as an orange, snarling nappy-wearing baby flew outside the British parliament in London on Friday, launched by critics of the U.S. president who are demonstrating throughout his visit to the country.

Trump, who arrived on Thursday, said he would avoid London as much as possible to avoid the protests.

“I guess when they put out blimps to make me feel unwelcome, no reason for me to go to London,” he told the Sun newspaper. “I used to love London as a city. I haven’t been there in a long time. But when they make you feel unwelcome, why would I stay there?”

Many British politicians regard close ties with the United States, which they call “the special relationship”, as a pillar of foreign policy and Prime Minister Theresa May has courted Trump before the country’s departure from the European Union.

But some Britons see Trump as crude, volatile and opposed to their values on a range of issues. More than 64,000 people have signed up to demonstrate in London against the visit while other protests are expected around the country.

Around 1,000 people gathered to watch the blimp launch in Parliament Square, with organizers of the stunt wearing red boiler suits and baseball caps emblazoned with “TRUMP BABYSITTER”.

Nicola Tanner, a 33-year-old public official from the southwestern city of Bristol, took the day off work to demonstrate. Wearing a t-shirt with the word “RESIST” on it, she said it was great that the blimp had “touched a nerve” with Trump.

“It’s embarrassing how much our government is falling over themselves to try to appease someone who has no interest in any sort of give-and-take in the UK-U.S. relationship at all, and is so capricious he can change his mind between the end of one tweet and the start of the next one,” she told Reuters.

After a countdown from 10, a cheer went up as the six-meter (20 foot) high balloon rose up. It hovered around 10 meters off the ground, next to the Westminster parliament building and near the River Thames.

Organizer Daniel Jones, 26, a charity communications officer, said they were trying to make people laugh as well as making a serious point. “It’s also about giving a boost to those in America resisting his policies,” he said.

One man dressed as a gorilla and wearing a plastic Trump mask, stood inside a large metal cage.

London Mayor Sadiq Khan, who was criticized by Trump in the Sun interview for failing to control crime and prevent militant attacks, gave his blessing for the blimp to be flown.

Khan rejected suggestions this showed a lack of respect for the U.S. president. “The idea that we restrict freedom of speech, the right to assemble, the right to protest because somebody might be offended is a slippery slope,” he told BBC radio. “We have a rich history in this country of having a sense of humor as well.”