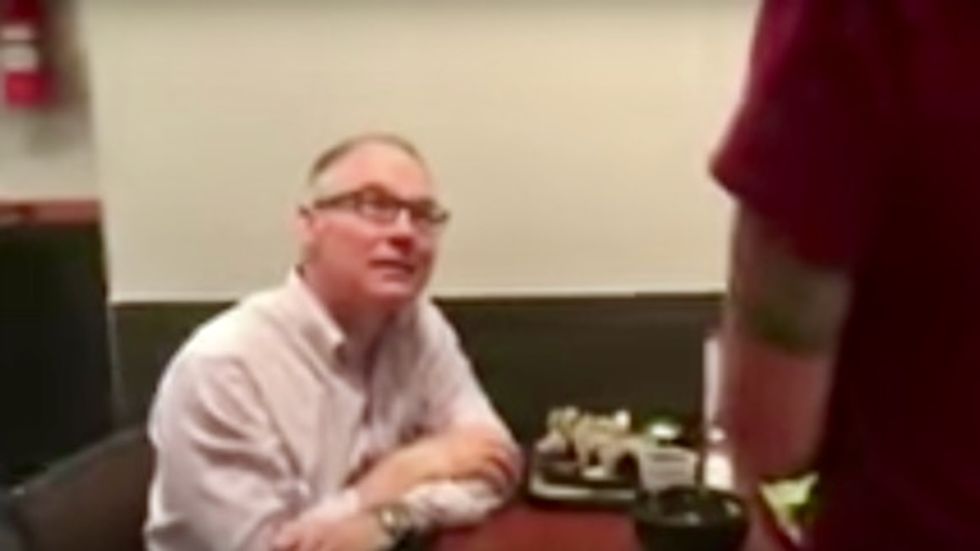 A woman carrying her young son confronted Scott Pruitt, the scandal-plagued chief of the U.S. Environmental Protection Agency, at a Washington eatery and politely asked him to resign to make way for somebody who will protect the environment.

Pruitt looked on in silence on Monday as the woman, Kristin Mink, criticized the EPA for relaxing fuel efficiency standards for cars and trucks and Pruitt for paying “$50 bucks a night to stay in a D.C. condo that’s connected to an energy lobbying firm,” according to a video posted on her Facebook page.

“This is my son. He loves animals, he loves clean air, he loves clean water,” said Mink, toddler on her hip, scribbled notes in her hand and a stuffed animal sticking out of a back pocket.

“We deserve to have somebody at the EPA who actually does protect our environment, somebody who believes in climate change and takes it seriously, for the benefit of all of us including our children,” she added. “So I would urge you to resign before your scandals push you out.”

Pruitt did not respond on the video.

“Administrator Pruitt always welcomes input from Americans, whether they agree or disagree with the decisions being made at EPA. This is evident by him listening to her comments and going on to thank her, which is not shown in the video,” EPA spokesman Lincoln Ferguson said.

A congressional panel is investigating Pruitt’s use of the condominium tied to an energy industry lobbyist. Pruitt is also under fire for frequently flying first class and purchasing costly items for his office, including a soundproof telephone booth.

He is the latest administration official to be confronted while dining by a member of the public who was protesting Trump policies. Last month, White House spokeswoman Sarah Sanders was asked to leave a restaurant in Lexington, Virginia, and Homeland Security Secretary Kirstjen Nielsen was heckled at a downtown restaurant.

Asked about the Pruitt incident, Sanders told Fox News Americans should be able to disagree, but in a way “that doesn’t call for people to never be able to step foot in public.”

Mink, whose LinkedIn page says she is a teacher at Sidwell Friends, a Washington private school, said she believed Pruitt should be held accountable for his actions.

“He’s corrupt, he’s a liar, he’s a climate change denier, and as a public servant, he should not be able to go out in public without hearing from the citizens he’s hurting,” she said in a Facebook post.