'You're not going to get away with this!" Fox News host Jeanine Pirro melts down when guest says Comey swung election 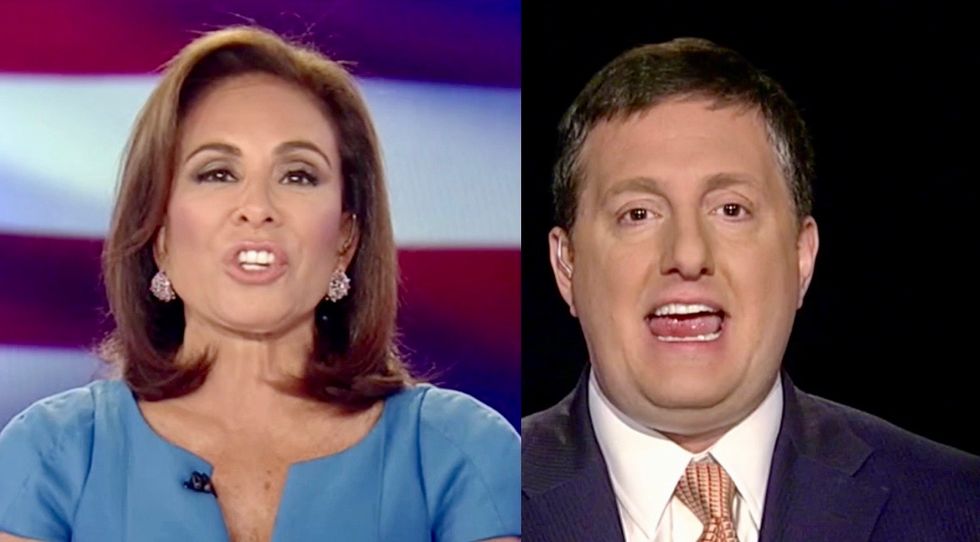 Fox News host Jeanine Pirro exploded at a guest on Saturday night who told her that law enforcement in general, and the FBI in specific, was not biased toward Democrats.

The panel featured Conservative Dan Bongino and Democratic strategist Philippe Reines, a former Hillary Clinton adviser. In it, Reines made several rather uncontroversial statements, which Pirro reacted to with rage.

"You were in the Secret Service, you worked with hundreds of other agents, you know there is no bias to the left among law enforcement," Reines said to Bongino. "It is crazy to think that there was this cabal within the FBI to elect Hillary Clinton."

"Oh my gosh! Philippe you are not saying that, are you?" Pirro said. "Let me tell you something: They are not an example of law enforcement!"

Reines then blamed James Comey's decision to announce that he was "reopening the investigation" into Hillary Clinton's emails, but not that he was investigating Donald Trump for his collusion with Russia, for the results of the election.

"Hillary Clinton is not president because of actions of the FBI," Reines said.

"Oh, baloney! That is a lie! Phillipe, you're not going to get away with this!" she screamed.

Pirro then explained James Comey only acted because FBI agents in the Southern District of New York were going to leak, conceding that Hillary Clinton was not president because of a group of conservative agents within the FBI threatened to illegally leak information about an ongoing investigation.