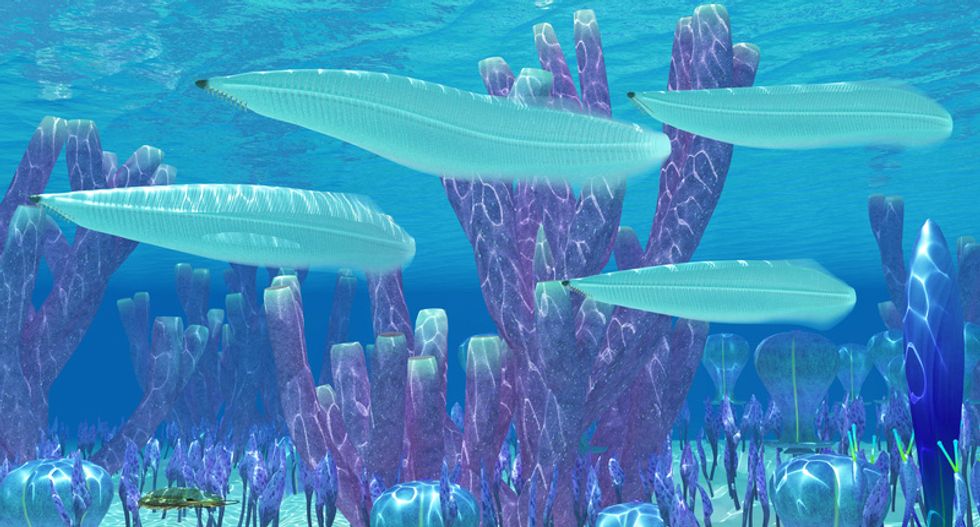 Pikaia fish swim together along with Trilobite invertebrates in blue ocean waters during the Cambrian Period. (Shutterstock)

When did animals originate? In research published in the journal Palaeontology, we show that this question is answered by Cambrian period fossils of a frond-like sea creature called Stromatoveris psygmoglena.

The Ediacaran Period lasted from 635 to 542m years ago. This era is key to understanding animal origins because it occurred just before the “Cambrian explosion” of 541m years ago, when many of the animal groups living today first appeared in the fossil record.

Yet when large fossils from the Ediacaran Period were first identified during the 20th century they included unique frond-like forms, which were not quite like any living animal. This prompted one of the greatest debates still raging in evolution. What exactly were these enigmatic fossils, often called the Ediacaran biota?

By comparing members of the Ediacaran biota to a range of other groups in a computer analysis of evolutionary relationships, we found that Stromatoveris psygmoglena provides a crucial link between the older period and the animals which appeared in startling number and diversity during the Cambrian period.

Fossils of Stromatoveris psygmoglena are found in only one place in the world: Chengjiang county, China. This region is known for exceptionally well-preserved Cambrian fossils from 518m years ago.

While the fossil record most often preserves only hard shells or bones, some special sites like Chengjiang preserve the remains of soft-bodied animals, such as Stromatoveris psygmoglena. Originally described in 2006 from eight known specimens, we examined over 200 new fossils of the organism that have since been discovered by researchers from Northwest University, China, and dated to the Cambrian period.

The way in which fossils of the Ediacaran Period were preserved has been another of their mysteries. These fossils often show signs of bending, twisting and tearing, suggesting that they preserve soft-bodied organisms without hard parts. However, there is rarely anything left of the soft tissues themselves.

Instead, they left moulds in the surrounding sediment, a little like a footprint on the beach. In contrast, the newly examined Cambrian fossils of Stromatoveris psygmoglena retain carbon-based tissue, allowing us to see the detailed and internal anatomy of the body itself.

During a research fellowship at the Tokyo Institute of Technology and the University of Cambridge, the new Cambrian period fossils of Stromatoveris psygmoglena were compared to earlier Ediacaran fossils in a computer analysis of anatomy and evolutionary relationships. This was also the first analysis to test the relationships between the Ediacaran biota and a range of other organisms, covering single-celled creatures called protozoans, algae, fungi, and nine types of animals, including Stromatoveris psygmoglena. This analysis used over 80 photographs of individual fossil specimens to compare anatomical features across these groups.

The analysis showed that Stromatoveris psygmoglena and seven key members of the Ediacaran biota share very similar anatomies, including multiple, branched fronds which radiate outwards like seaweed, uniting them all in a new group of early animals called Petalonamae. The name means “Nama Petals” and was chosen to honour biologist Hans Pflug and his work on the Ediacaran biota in Namibia, a reference to the petal-like fronds which, Pflug noted, distinguish these unusual animals.

Uniting these members of the Ediacaran biota and Stromatoveris psygmoglena in a single group of animals has major implications for animal origins. In light of this new evidence, some older ideas on early animal evolution may need to be revised.

Because members of the Ediacaran biota can now be classed as animals, we can date the origin of the animal kingdom to at least the time when these fossils appeared. The oldest members of these groups are known as “rangeomorphs” and appear in the fossil record approximately 571m years ago, in the late Ediacaran Period.

This means that animal species were diversifying well before the Cambrian explosion. It may also mean that the search for animal origins should now focus on the time before this, in the early Ediacaran and even more ancient geological periods. Based on this, animals may have originated much earlier than the traditional reading of the fossil record had suggested.

This study also has key implications for the ecology and eventual extinction of the petalonamids. Many Ediacaran species have not been found in later rocks leading some researchers to think that they were a “failed experiment” in evolution, disappearing by the beginning of the Cambrian. Indeed, this was my own view until I saw the remarkable new fossils of Stromatoveris psygmoglena.

The inclusion of this Cambrian animal among the petalonamids changes the picture of the Ediacaran biota. Stromatoveris psygmoglena shows that the petalonamids were alive and well over 20m years into the Cambrian period and did not go extinct at its outset, as had been thought.

Even more intriguing, more than 200 fossils of Stromatoveris psygmoglena have now been found, despite the fact that it lacked hard parts which are usually most easily preserved. This indicates that this species was an important member of its shallow marine ecosystem rather than a rare or marginal survivor.

This could mean that the petalonamids adapted more successfully to the changes of the Cambrian period than had been thought, or that the Ediacaran period and its animals were less alien and more advanced than previously realised. We can be confident, however, that the animal kingdom we occupy is much older than we once thought.