Here's what the biographers of Al Capone think of Donald Trump 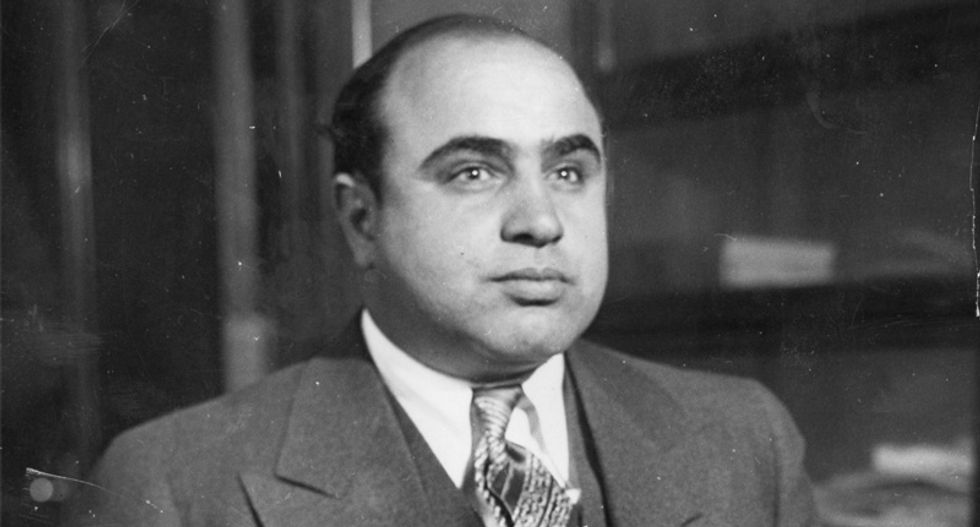 "Scarface" Al Capone is shown here at the Chicago Detective bureau following his arrest on a vagrancy charge.

Amid a recent flurry of distressing and disturbing statements from President Donald Trump, one of his more bizarre utterances has gotten lost in the shuffle.

Speaking to Fox News pundit Sean Hannity after his summit with Vladimir Putin, Trump blamed America’s strained relations with Russia on the ongoing investigation into whether his campaign colluded with that government to influence the 2016 election.

“With Paul Manafort,” Trump said, “who really is a nice man, you look at what’s going on with him. It’s like Al Capone! … It’s just a sad thing. It’s a very sad thing for our country to see this.”

Trump did not explain his allusion to the most famous bootlegger of the Prohibition era. While interpreting presidential pronouncements can be difficult work these days, we—as Capone’s most recent biographers—feel a certain duty to place his comments in context.

Perhaps, as Vox suggested, the president was referring to the famous irony that Capone—the mastermind behind the 1929 St. Valentine’s Day Massacre and many other murders—only ended up going to prison for the comparatively minor crime of income tax evasion.

But this would be a strange way of exonerating Manafort because, according to Vox, “Trump seems to be implying that they ‘got’ Manafort on lesser crimes than he’s guilty of.”

Even Trump’s reference to Manafort as “a nice man” suggests a certain sympathy with Capone, who often claimed to be a misunderstood public servant as federal investigators pursued him.

Trump, after all, has previously displayed a kinship with the mobster mindset. In 1992, according toNew York magazine, after Trump said his way with women was “to treat ‘em like shit,” a friend remarked: “You’d make a good mafioso.”

“One of the greatest,” our future president replied.

Capone, like Trump, was prone to public self-pity, apparently needing to go before the press and complain about how poorly the authorities and the media treated him.

In December 1927, Capone announced that he’d suffered enough abuse and was leaving for Florida.

“Let the worthy citizens of Chicago get their liquor the best they can,” Capone told the Chicago Tribune. “I’m sick of the job—it’s a thankless one and full of grief. …

“I’ve been spending the best years of my life as a public benefactor. I’ve given people the light pleasures, shown them a good time. And all I get is abuse—the existence of a hunted man. …

“Public service is my motto. … But I’m not appreciated. It’s no use.”

When Capone went to Los Angeles instead, the locals didn’t appreciate him either. Forced out of the city and sent home by the LAPD, Capone griped to the Los Angeles Times: “Why should everybody in this town pick on me?”

Trump seems to believe that Manafort is being picked on, too. But if the former campaign manager has anything in common with Capone, it’s that both men know how to make the most of spending time behind bars.

According to the New York Times, Manafort was recently transferred out of one jail for receiving “unique privileges” and “V.I.P.” treatment, from an abnormally large cell which he could roam without a uniform to “his own bathroom and shower facility, his own personal telephone and his own work space to prepare for trial.”

Capone enjoyed virtually identical perks during his stays at Eastern State Penitentiary in Philadelphia and Chicago’s Cook County Jail. Tourists today can view a recreation of Capone’s cell at the former institution, now a historic site open to the public.

But apart from a certain sartorial similarity—Stephen Colbert once compared Manafort to the “maître’d at a gangster-themed pizzeria”—the GOP operative hasn’t really earned a comparison to Capone. The president he helped elect, however, has.

Like Trump, Capone’s rise was the result of a breakdown in American government and politics. For a while, the endemic corruption in Chicago paralyzed any efforts at reform, protecting Capone from the consequences of his actions.

But when Capone grew so big, so powerful, and so destructive that his actions threatened the city’s commerce—both legitimate and illegal—members of his own gang turned on him, secretly cooperating with federal investigators to end his reign.

Perhaps the uniformly negative responses to Trump’s performance in Helsinki—even coming from members of his own party and his usual cheering section on Fox News—portend that he may soon face a similar fate.

But we shouldn’t think that Trump’s departure from office would fix the forces that brought him to the White House, any more than Capone’s conviction marked the end of organized crime. Although Capone and Trump have been known to cultivate an image of being in charge—of being the boss—both these historical figures are symptoms of much bigger problems.

Some outsiders who saw Capone up close were surprised when he treated other gangsters with deference, or when his allies treated him like a subordinate. The media presented him as the uncrowned king of Chicago, but in reality he shared power with other mobsters who were happy to see him go once he became a liability.

Even more than an infamous gangster, the leader of the free world should be the dominant personality in any room. Yet the body language on display at the Trump-Putin summit showed a president of the United States shockingly submissive to a hostile foreign power.

As Trump told Sean Hannity, “It’s a very sad thing for our country to see this.”

A. Brad Schwartz and Max Allan Collins are the co-authors of Scarface and the Untouchable: Al Capone, Eliot Ness, and the Battle for Chicago, which will be published next week by William Morrow. Schwartz, a doctoral student in American history at Princeton University, is the author of “Broadcast Hysteria: Orson Welles's War of the Worlds and the Art of Fake News.” Collins is a screenwriter and a leading indie filmmaker in his native Iowa.