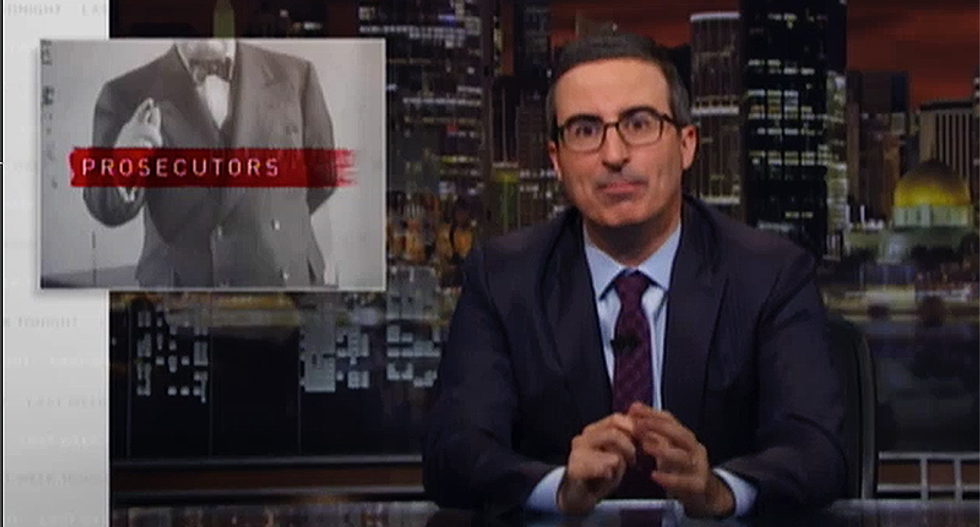 After playing a clip of news reports saying that it was at the discretion of prosecutors to decide if someone will be charged, Oliver sounded the alarm. According to his mountain of evidence, prosecutors are rarely held accountable for misconduct inside courtrooms and out.

An example was a prosecutor withholding evidence to avoid one person getting a hefty sentence. He compared that to those who are sent away for a long time because of evidence that isn't available.

"Prosecutors were responsible for concealing exculpatory evidence in about 25 percent of all exonerations," a report from The National Registry of Exonerations.

"And that is because prosecutors typically get to decide whether something is relevant to the defense," Oliver said. "Which is inherently flawed. You can't just count on an adversary to voluntarily expose all of your weaknesses."

Oliver described some prosecutors as ruthless, cruel and unwilling to give any leeway to the accused in a system of justice that upholds innocence until guilt is proven. When prosecutors do hold evidence, there is little that is done.

Two main cases in which prosecutors decided not to bring charges were in Philadelphia against Bill Cosby and Los Angeles prosecutors who refused to charge Harvey Weinstein. The same has been true in numerous police shootings where prosecutors refused to charge the officer in the case, even when the families won civil suits against them.

In a past episode on criminal justice reform, Oliver outlined the urgency of the accused to make a deal and plead guilty, which happens 95 percent of the time. Judges are amenable to it because they see it as a way of keeping the system moving, Oliver explained.

Finally, Oliver concluded that prosecutors aren't entirely to blame but accused Americans of not being more aware of what their local officials are up to and for what they stand.