John Oliver: If you're poor and require an overworked and underfunded public defender -- 'you're f*cked' 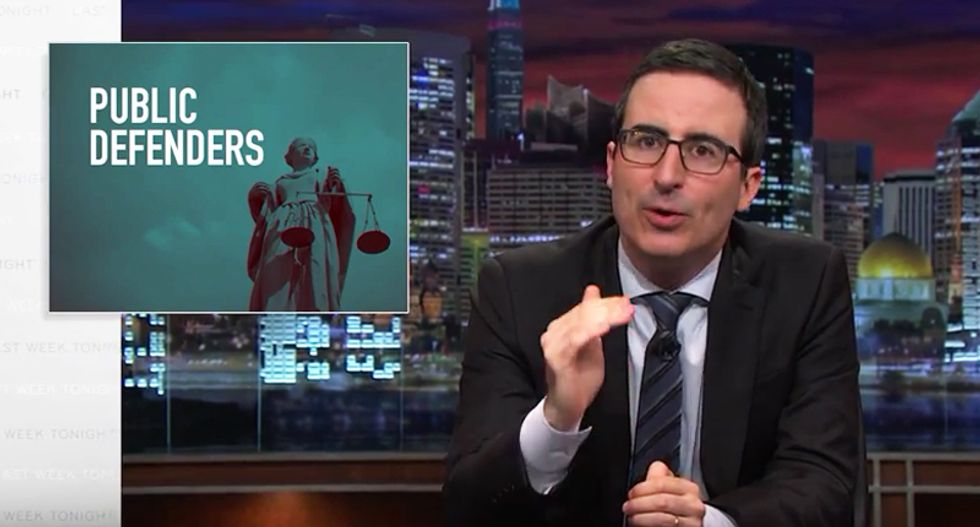 Calling them "the only people who have been to court more frequently than former child stars,” HBO's John Oliver returned from hiatus to take up the cause of public defenders, those overworked attorneys the Miranda warning claims will be appointed to you should you be arrested and need one.

According to the host of Last Week Tonight, everyone in America is aware of the part public defenders play in our court system, but few know how overworked they are, giving the example of Fresno defenders handling up to 1,000 cases per year -- or nearly three per day.

"With caseloads that heavy, public defenders cannot possibly prepare an effective defense," Oliver explained. "A study in New Orleans, a few years back, found the city had some part-time defenders who could only spend an average of seven minutes per case. And that is not long enough to prepare anything. If I only had seven minutes to prepare this show, I would definitely not be talking about public defenders right now. I'd be desperately trying to fill time right now by listing the Muppets in order of f*ckability."

Oliver said that with caseloads so high, the system is known as "meet 'em and plead 'em," with the vast majority of cases being resolved through plea bargaining whether the accused is guilty or not.

Furthermore, despite the Miranda warning's promise that "an attorney will be appointed for you," suspects in 43 states can still be billed for using a public defender regardless of their ability to pay.

With that in mind, Oliver employed the services of TV cops like Dennis Quaid, Sonja Sohn from The Wire, and Jeremy Sisto from Law & Order, to provide their suspects with a new -- and more honest - Miranda Warning, that concludes by advising the alleged perps they are "f*cked" by an overworked and underfunded system of justice.

Watch below, from HBO: