Kellyanne Conway: 'It's amazing that Trump won under the circumstances of this rigged system' 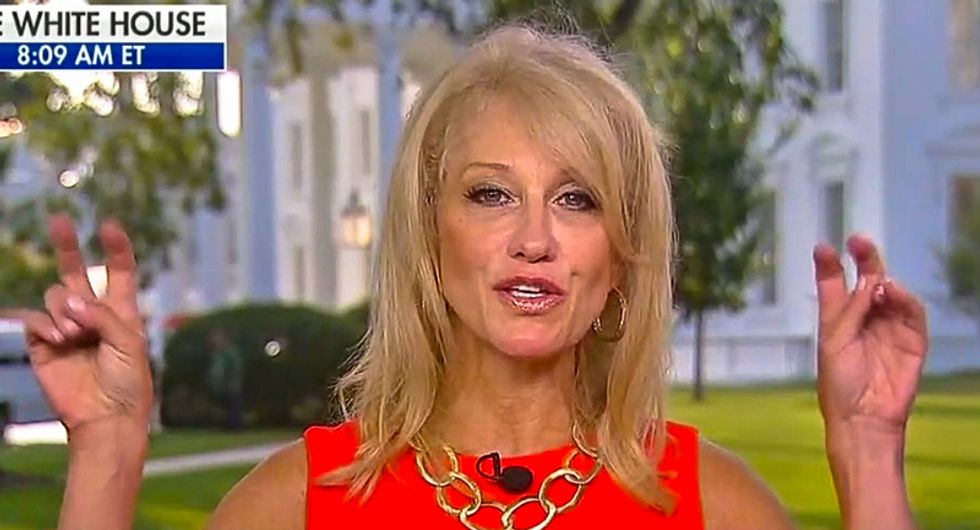 While ranting about Hillary Clinton's emails on Wednesday, White House aide Kellyanne Conway declared that a dossier of opposition research against President Donald Trump is filled with "bunk."

During an interview on Fox & Friends, Conway argued that there should be an "investigation on the other side" to rein in special counsel Robert Mueller's Russia probe.

Conway noted that Justice Department official Bruce Ohr has not been fired even though he was known to have communicated with Michael Steele, who authored the dossier on Trump.

"This is incredibility important testimony because it does show that Americans -- in the interest of accountability and transparency -- do have a right to know what was going on the other side," Conway insisted. "That woman [Hillary Clinton] lost the presidency but just because she lost doesn't mean that we shouldn't know everything that was happening on the other side to rig the system -- the fix was in against candidate Trump."

"It's amazing that he won under the circumstances of this rigged system," Conway opined. "People at the highest echelons of the FBI and DOJ trying to deny him the election. And once he won, during transition, trying to deny him a smooth transition in our Democratic process into his presidency."

According to Conway, "dossier" is the "French word for load of bunk."

"The man that came up with the dossier... this man was in cahoots with the people high up at the FBI and the DOJ," Conway said of Christopher Steele. "So much of this was going on during the transition... and yet they were still feverishly and very nervously if you look at some of those communications trying to put the fix in after they failed to do it the first time."