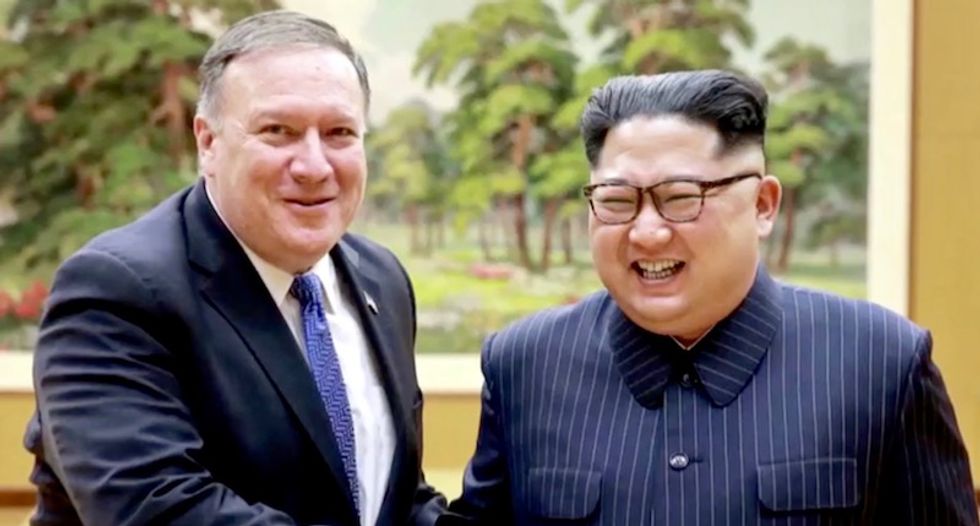 Mike Pompeo and Kim Jong-un during their negotiations/Screenshot

North Korea on Saturday said the US was acting with "alarming" impatience on the issue of denuclearisation, after Secretary of State Mike Pompeo stressed the need to maintain full sanctions pressure on Pyongyang.

The contrasting comments at a security forum in Singapore came after a new UN report showed Pyongyang was continuing with its nuclear and missile programmes and evading sanctions through ship-to-ship oil transfers.

At historic talks with President Donald Trump in June, North Korea's leader Kim Jong Un signed up to a vague commitment to "denuclearisation of the Korean Peninsula" -- a far cry from long-standing US demands for complete, verifiable and irreversible disarmament.

While US officials have publicly been optimistic about the agreement, Pyongyang appears to have made little substantial progress and concerns have been growing that some UN member states have been easing sanctions.

AFP / Roslan RAHMANSaturday's forum, hosted by the Association of Southeast Asian Nations (ASEAN), brings together top diplomats from 26 countries and the European Union

But he criticised the US for undermining confidence in the process: "What is alarming, however, is the insistent moves manifested within the US to go back to the old, far from its leader's intention."

Since the June agreement, Pyongyang had taken "goodwill measures", including a halt on nuclear and missile tests and "dismantling a nuclear test ground", he said, according to a statement.

"However, the United States, instead of responding to these measures, is raising its voice louder for maintaining the sanctions against the DPRK," he said, using the initials of the North's official name.

"As long as the US does not show in practice its strong will to remove our concerns, there will be no case whereby we will move forward first unilaterally," Ri added.

Ri also accused the US of "extremely inappropriate" behaviour by putting pressure on other countries not to send high-level delegations to celebrations to mark the 70th anniversary of North Korea in September.

It was not the first time the North has appeared unhappy at what it sees at US impatience to push them quickly along the path of denuclearisation.

When Pompeo met with North Korean officials in Pyongyang last month to flesh out the regime's commitment, they condemned his "gangster-like" insistence that the North move towards unilateral disarmament.

Earlier at the same forum, Pompeo said he was emphasising to countries "the importance of maintaining diplomatic and economic pressure on North Korea" but also said that he was "optimistic" about the prospects for progress when it came to North Korean denuclearisation.

Saturday's forum, hosted by the Association of Southeast Asian Nations (ASEAN), brings together top diplomats from 26 countries and the European Union for talks on political and security issues in the Asia-Pacific.

As well as the US and North Korea, it includes foreign ministers from China, Russia, South Korea and Japan, all countries traditionally involved in efforts to curtail the North's nuclear ambition.

At the meeting, the US delegation also delivered a letter from Trump intended for Kim, by passing it to Ri, Pompeo said in a tweet.

It was Trump's reply to a letter he received from Kim earlier this week, he said.

Pompeo also briefly met the North's foreign minister Saturday. The US top diplomat went over to greet him at a joint photo of ministers ahead of the day's main forum, with the pair shaking hands, smiling and exchanging some words.

While the encounter was brief, State Department spokeswoman Heather Nauert described it as a "step in the right direction" given where US-North Korea relations were a year ago, as tensions soared due to the North's weapons tests.

Pompeo had already left the forum to fly to the next stop on his trip, Indonesia, when Ri delivered his fiery statement, she said.

During meetings with other foreign ministers in Singapore, Pompeo said he had called specifically for sanctions to be enforced through halting ship-to-ship oil transfers.

Cutting off oil and fuel to the North would require enforcement primarily by China, which supplies most of North Korea's energy needs, but also by Russia, which delivers some oil to Pyongyang.