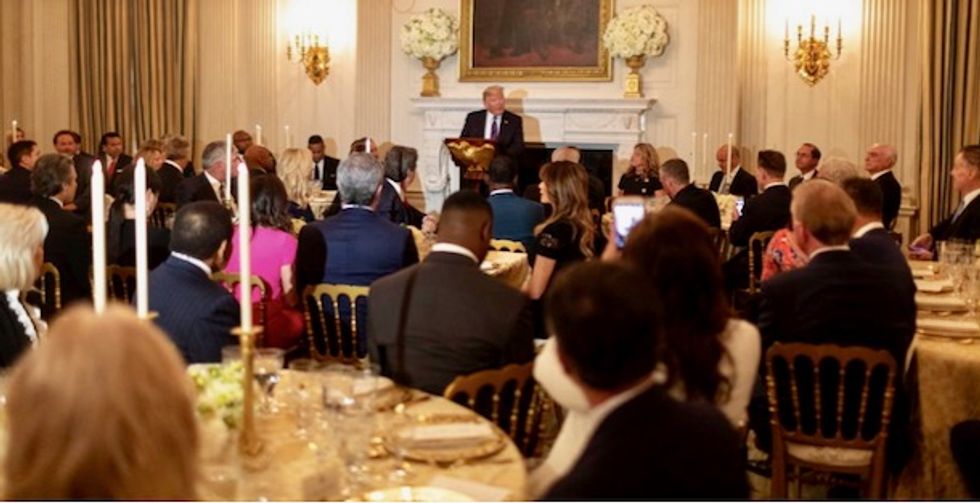 It was wonderful to host Evangelical leaders at the @WhiteHouse tonight. https://t.co/8R4jC6VVJr
— Melania Trump (@Melania Trump)1535423881.0

President Donald Trump, along with the First Lady and First Daughter, Monday evening paid tribute to about 100 of the nation's most prominent Evangelicals – many of whom also happen to be some of the nation's top anti-LGBT activists. Also present were Vice President and Mrs. Pence, Kellyanne Conway, and Sarah Sanders.

Also in attendance, as documented in news reports and in photos posted to social media, were Eric Metaxas, Greg Laurie, and Gary Bauer. Bauer served before Perkins as the president of the Family Research Council.

Member of Trump's Evangelical leadership advisory board Johnnie Moore also posted photos, including one showing Ivanka Trump and another showing Jared Kushner at the dinner:

Religion reporter and pundit David Brody of Pat Robertson's CBN notes the President and First Lady were presented with a Bible signed by over 100 Evangelicals, thanking them for "the price you have paid to walk in the high calling."

And Michele Bachmann was part of the evening's festivities:

Brody breaks the facade of "Javanka's" supposed liberal and pro-equality beliefs, writing, "Don’t underestimate the role that Ivanka and Jared have played in the evangelical orbit. It’s been substantial. Evangelical leaders close to the WH have embraced them fully."

And here's Franklin Graham, another Evangelical who has spent decades attacking LGBT people and actively working to oppose their rights:

"We need to maintain our vigilance in the upcoming days," Graham told attendees. "The concern is that this is a spiritual warfare, this is a battle and ultimately battle is won on our knees."