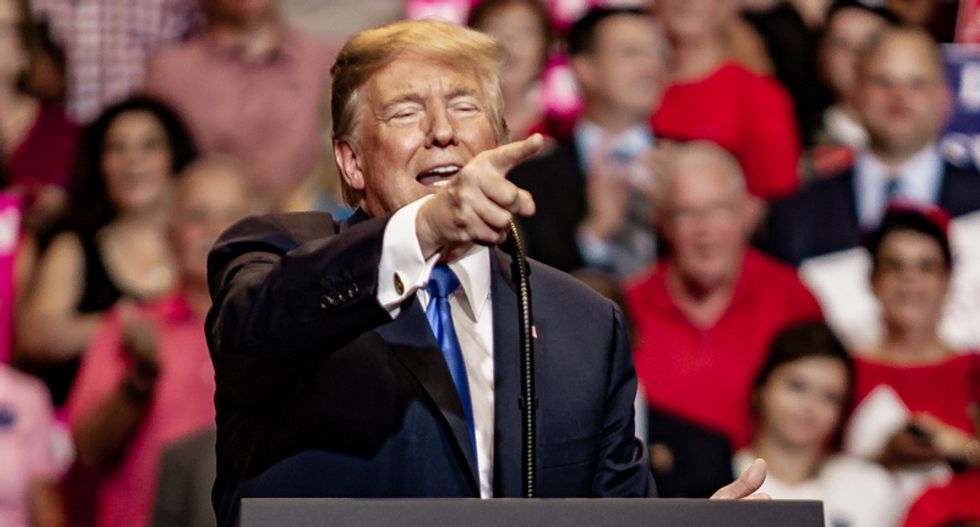 President Donald J. Trump delivers a speech during the "Make America Great Again" rally held at the Mohegan Sun Arena. (Brandon Stivers / Shutterstock.com)
With Donald Trump's political woes being overshadowed by the news of Sen. John McCain's death over the weekend, one might think the president would be relieved to have a change of subject from his no good, very bad week. Yet Trump seems to be fulminating at all the praise and attention for his nemesis, as even his beloved Fox News gives its airwaves over to paeans to the man Trump loathes above all others.This article was originally published at SalonThe Washington Post reported that Trump even refused to issue a laudatory tribute to McCain's years of service to the country, insisting instead on a flaccid tweet sharing thoughts and prayers for the family. After which he tweeted some standard insults about the Mueller investigation, threw out some economic news, complained about social media censorship and whined that President Obama gets too much credit for the economy. Even some of his defenders, who evidently expected him to step up and act like a normal president in this circumstance, were disappointed.

Of course, that didn't deter the veteran Fox News anchor from shrugging his shoulders and carrying on as usual. He went right back to defending the president, retweeting a Washington Examiner story that claimed "Robert Mueller's 'win' exposes how the media never cared about Russia 'collusion'" and linking to a story entitled "How Anti Trump Hyperbole Fosters Insanity."

Hume has known John McCain for decades and seemed to genuinely grieve at the news of his passing. He was also once a respected newsman, even during his early years at Fox. But his allegiance to Trump is so central today that even when the president behaved like a petulant child at a moment that demands grace and dignity from political leaders (all of whom rose to the occasion except him), Hume didn't miss a beat before going right back to rationalizing and excusing his childish behavior. Not that anyone should expect otherwise. Trump's degradation of McCain's years of torture as a POW is well known, yet massive numbers of Republicans still adore him.

Recall that last week was widely seen as Trump's worst among many bad weeks. He started off still trying to fend off his former staffer Omarosa, who is peddling a book (and tapes!) about her time with the campaign and in the White House. The entire intelligence community was up in arms about Trump's abrupt withdrawal of former CIA chief John Brennan's security clearance, entirely for political reasons. Trump's former lawyer Michael Cohen pled guilty to a felony and said under oath that Trump had ordered him to do it, while Trump's former campaign chairman Paul Manafort was found guilty of eight counts of tax evasion and bank fraud.

Next the president began talking like a mobster and pretty clearly dangling a pardon for Manafort as long as he doesn't "break." Then he found out that his pal David Pecker, the publisher of the National Enquirer (who apparently literally kept Trump's secrets in a safe) was reportedly given immunity by the feds in the Cohen investigation, along with the Trump Organization's chief financial officer, Allen Weisselberg. The state of New York is also pursuing an investigation into the misuse of his private charity funds.

Oh, and Trump also went after his besieged attorney general, Jeff Sessions, one more time on "Fox & Friends," prompting a rare response from the A.G. By the end of the week it appeared that Republicans in the Senate were so afraid that Trump was about to blow his lid and fire Sessions before they can pack the Supreme Court with right-wing extremists that they signaled him the go-ahead to do it after the midterms.

That's a lot, and none of it is good for the president. His legal jeopardy is more acute by the day and it's coming from different directions. The chaos in the White House is all-consuming and his Twitter feed is a stream of consciousness expression of a man who is drowning. At one point in the week he sent out one of his "NO COLLUSION --- RIGGED WITCH HUNT!" primal tweets at 1:10 in the morning. It feels as though something has to give.

And yet, according to the latest NBC/Wall Street Journal poll:

Republicans are more behind him than ever, with 90 percent approving of Trump's job performance. The more trouble he's in, the more they like him. And this week could bring him some more very serious trouble:

We may be in for a big week. With Justice Dept's reported moratorium on major actions in run up to midterm electio… https://t.co/FiMyuGWdA7
— Ryan Goodman (@Ryan Goodman) 1535304486.0

The world will see John McCain lying in state at the Capitol and he'll be eulogized in a funeral at Washington's National Cathedral by former presidents George W. Bush and Barack Obama. Trump is not invited and for good reason. He would almost certainly make a mockery of the occasion and turn it into a brag-fest for himself. His boorish behavior toward the man during his illness was almost certainly a bridge too far for McCain's family.

I wouldn't expect any of that to affect the esteem that 90 percent of Republicans feel for Donald Trump, however. I'm honestly not sure that Trump wasn't right when he said he could shoot someone on Fifth Avenue and not lose any voters. At this point I can't imagine what it would take.