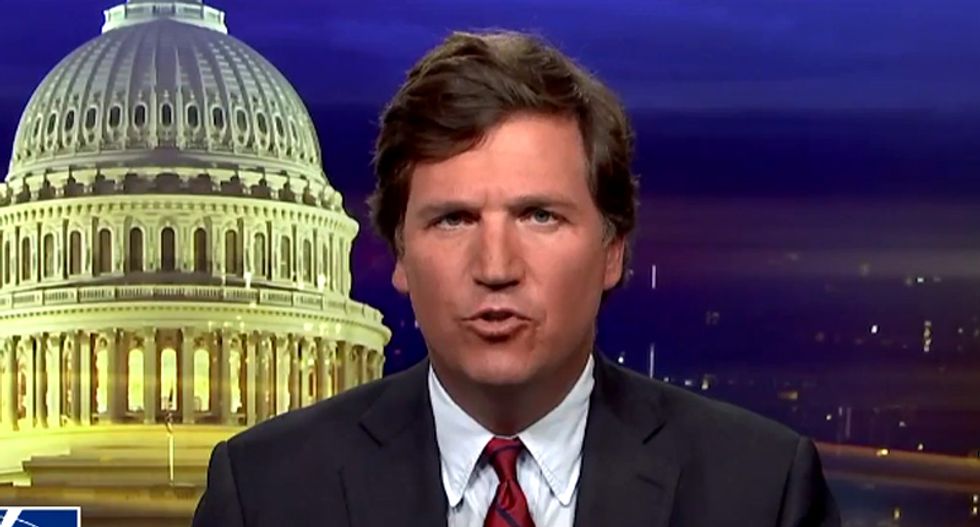 Last weekend's Unite the Right rally in Washington — scheduled to celebrate the one-year anniversary of the white supremacist gathering in Charlottesville, Virginia, that culminated in the murder of one woman and injuries to many others — was supposed to be a massive show of white nationalist power. Instead, the event was a whiff, with only a couple of dozen attendees, who bailed out early after realizing what a failure the whole thing turned out to be.

Monday night, Tucker Carlson, on his prime-time Fox News show, was triumphant, declaring that this was proof that white supremacy is a liberal myth.

"White supremacy is not ubiquitous in America, it's not a crisis. It's not even a meaningful category. It is incredibly rare," he declared, claiming that the country that legalized slavery and had Jim Crow laws in many states until 1964 is "a generous, tolerant country" and has "always has been that."

"People who tell you otherwise are either delusional or trying to control you with fear, likely both," he concluded.

Carlson is not telling the truth, and it's quite likely he knows that. His own show — which is the third most popular cable news program in the country and gets 2.7 million viewers a night — is itself a celebration of white nationalism, dedicating to popularizing views that could be directly lifted from an overtly racist website.

"Tucker Carlson probably has been the No. 1 commentator mainstreaming bedrock principles of white nationalism in this country, which is fear of immigrants, fear of Muslims, keeping them out and arguing that whites are under attack," said Heidi Beirich, the head of the Southern Poverty Law Center's Intelligence Project.

"What white supremacy is about is keeping this country white," she continued, saying that was "exactly the sentiment" Carlson consistently promotes on his show, "the idea that the demographics are shifting in a bad way.”

Beirich added that the rhetoric on Carlson's show, as well as on Laura Ingraham's program later in the Fox News evening lineup, has grown so extreme that "the views of Richard Spencer have become mainstream, at least on the right."

Carlson is “a friend of the extremists, of the neo-Nazi movement, of the Daily Stormer," said Andrew Lawrence, a researcher for Media Matters who watches Carlson's show every night. "They all look to Tucker Carlson as a voice in mainstream media that’s pushing their rhetoric." Lawrence added that Carlson "dances around" using loaded and overtly racist terms like "white genocide," but is “so good at pushing those ideas that those people know exactly what he’s talking about."

“You can get away with anything on Fox News, be as racist as you want, as long as you don’t use a racial slur," Lawrence said.

None of this is an exaggeration. Ever since Carlson took over Fox's prime evening slot from the disgraced Bill O'Reilly early in 2017, he's been churning out a torrent of stories painting white people as victims of a conspiracy between liberal elites and racial minorities, who are determined to destroy white people's power and influence, if not wipe them out altogether.

Carlson has argued that Central Americans seeking political asylum are an "invasion" force rather than migrants or immigrants.

In arguing against the right of black athletes to protest police violence, Carlson said, "We aren't like other nations with a homogeneous population," and concluded therefore that the only way to maintain social peace was for people of color to silence their objections to systemic racism.

In defending the Trump administration's policy of punishing legal asylum seekers by taking their children away from them, Carlson declared that his favorite villain, the liberal elite — which he calls the "ruling class," even though Democrats currently hold no government power — "care far more about foreigners than their own people."

He argued that Mexico "is routinely interfering in our elections by packing our electorate" — an argument which clearly implies that naturalized citizens, at least those from Mexico, have no legitimate claim to the American citizenship they had to study for and earn.

He claimed that Latino immigration is "more change than human beings are designed to digest" and asked rhetorically, "How would you feel if that happened in your neighborhood?” During that same rant, Carlson declared that the nefarious liberal elite "are for diversity, just not where they live."

After that episode in particular, white nationalists on the Stormfront site celebrated, pointing out that this is a very close paraphrase of the white nationalist slogan "diversity for thee, but not for me," which makes the same claim — that white liberals are somehow foisting diversity on other whites while living in lily-white enclaves themselves.

Most people think of white nationalists as virulent racists, which they are, but what is less widely understood is the methods contemporary white nationalists employ to justify their hate. Their primary argument is that in 21st-century America white people, not people of color, are the real victims of racism. The argument is that people of color and white liberal elites (sometimes explicitly called out as "the Jews") are conspiring to destroy "white culture" through policies that accept or even encourage racial diversity. This delusional theory is called "white genocide," and while Carlson avoids that specific phrase, its basic premise is embedded throughout his show.

Carlson's program has frequently "focused on how white people have it tough" and how unnamed evil forces are "coming for white people," Lawrence said, noting that Carlson employs the thinnest possible excuses for segments claiming that white people are being racially abused, while repeatedly denying that racism against people of color is real. "It’s shocking to see, night after night, really," Lawrence said.

All of this may explain why I declined an invitation to appear on Carlson's show about the "threats" to "Western civilization" (his preferred euphemistic work-around for "white genocide"). I understood perfectly well that Carlson intended to cast me in the role of the villainous "liberal elite," even though he probably earns more in a year than I will in a lifetime.

In reality, the sparse turnout at last weekend's Unite the Right rally is not a sign of the movement's failure in the slightest. As Adam Serwer at the Atlantic wrote last week, white nationalists win "by activating white panic, by frightening a sufficient number of white people into believing that their safety and livelihoods can only be protected by defining American citizenship in racial terms, and by convincing them that American politics is a zero-sum game in which white people win when only people of color lose."

By that measure, the project has been a smashing success — and Carlson, who captures the eyeballs of millions of avid conservatives every night of the week, has been instrumental in helping the white nationalist movement reach its goals.

Beirich and Lawrence both suggested that the low turnout at the rally reflected the implosion of overt and organized white nationalism since last summer's violence in Charlottesville. Many prominent alt-right figures were arrested. A number of rally-goers were doxxed and lost their jobs and their social standing. The death of Heather Heyer, when a white nationalist slammed his car into a crowd of anti-racist demonstrators, damaged the movement's image. There's been infighting and drama that has further torn apart the small community of overt white nationalists and fascists.

But one could also argue that the low turnout at the D.C. rally is a sign of white nationalist success. People may feel no need to expose their views at a controversial public event when they can turn on Fox News or look to the president of the United States as validation for their bigoted views. Why bother adopting the stigmatized identity of a neo-Nazi when you can hold the same beliefs and presenting as pretty close to a "mainstream" Republican?

Carlson is not actually celebrating some withering-away of American racism. Instead, he's defining "racism" very narrowly, to allow his viewers to tell themselves that they can hold odious, bigoted views without having to worry that they deserve that dreaded label.

But while Carlson would have people believe that white nationalism is "about a fringe neo-Nazi with a swastika tattoo," Beirich said, the real issue is the "conception that white people should rule and control this country," which is embedded in every diatribe about the threat of demographic change heard on Carlson's program.

Behind that, Beirich said, lies "a racial conception that white people are somehow superior to black and brown people." Which is the fundamental viewpoint of white supremacy, no matter how much Carlson tries to pretend otherwise.