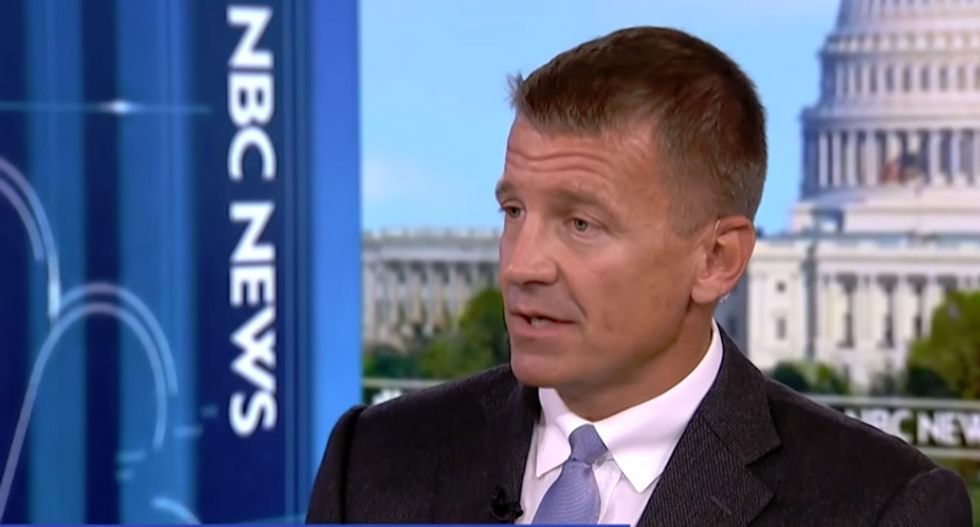 Amid reports that President Donald Trump is "showing renewed interest" in Blackwater founder Erik Prince's plan to hand the war in Afghanistan over to a private army led by an "American viceroy,"  MSNBC on Friday happily gave the notorious war profiteer a cushy platform to make his nonsensical and dangerous pitch to the president almost entirely unchallenged.

"Shame on MSNBC for giving Erik Prince a megaphone," Stephen Miles, director of Win Without War, wrote on Twitter following Prince's interview with MSNBC's Andrea Mitchell. "He belongs in the Hague, not spewing his warmongering for profit filth on television."

Highlighting the failure of both the deadly "conventional" approach the U.S. has taken in Afghanistan over the past 16 years and Prince's plan to continue the war for profit, Miles went on to suggest an option that—for obvious reasons—Mitchell and Prince both ignored, one that is virtually never aired on corporate media networks like MSNBC.

"What if—hear me out—instead of privatizing the war in #Afghanistan, we ended it," Miles wrote. "Crazy, I know."

Watch Prince's full appearance on MSNBC, during which the infamous mercenary was asked for his thoughts on Omarosa but wasn't once seriously challenged on his "prescription for endless war":

"When Prince's plan had Trump's attention in 2017, it had the backing of his former strategist Steve Bannon and the president's son-in-law and senior adviser, Jared Kushner," NBC reported.

As usually happens when Prince makes his periodic appearances on corporate news shows to tout his opportunistic, for-profit war plan, critics were quick to highlight his horrendous track-record and argue that his plan to privatize the war in Afghanistan would lead to even less oversight and more bloodshed.