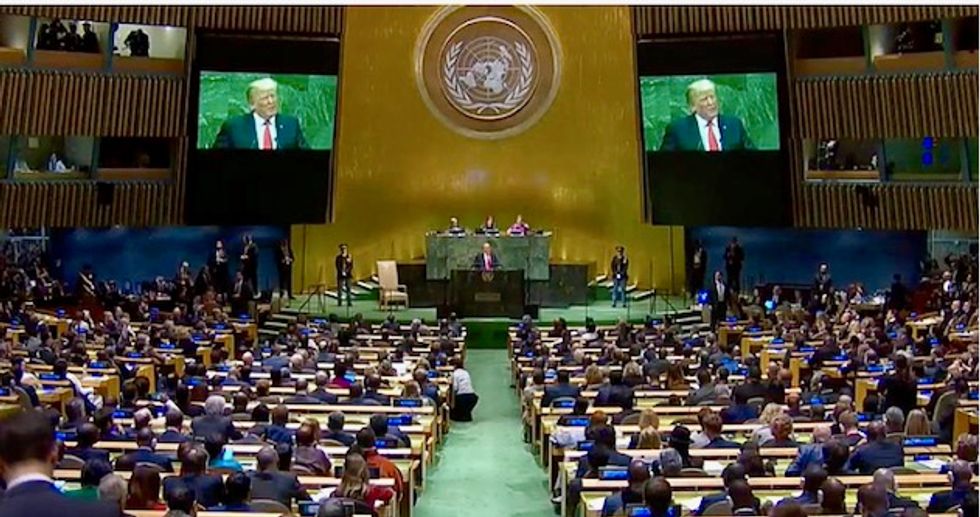 Donald Trump at the UN

Late Tuesday morning President Donald Trump was literally laughed at by the world – or, at least, world leaders – while he bragged about his accomplishments to an unimpressed audience.

"In less than two years, my administration has accomplished more than almost any administration in the history of our country," Trump told the United Nations General Assembly.

Like every speech he gives, Trump of course was delivering a speech to his base. He just happened to be at the United Nations.

President Trump repeatedly lied on the campaign trail, falsely claiming America had become a laughing stock of the world. In fact, under President Barack Obama, the world's respect for America skyrocketed. It has plunged under Trump, dropping 18 points, according to a Gallup World Survey poll.

So this tweet Trump posted four years ago is especially amusing, and getting a lot of attention right now, after the world laughed at the American president.

We need a President who isn't a laughing stock to the entire World. We need a truly great leader, a genius at strategy and winning. Respect!
— Donald J. Trump (@Donald J. Trump) 1407569450.0

There is always a tweet, especially after Trump was laughed at by the entire world at the UNGA. https://t.co/iDZnfUcwCH
— Philip Crowther (@Philip Crowther) 1537887078.0

Let's see. You've caused our standing in the world to nosedive, and have proven yourself to be a weak and narcissis… https://t.co/MLIIJmgXZ1
— Darrell Lucus (@Darrell Lucus) 1537888589.0