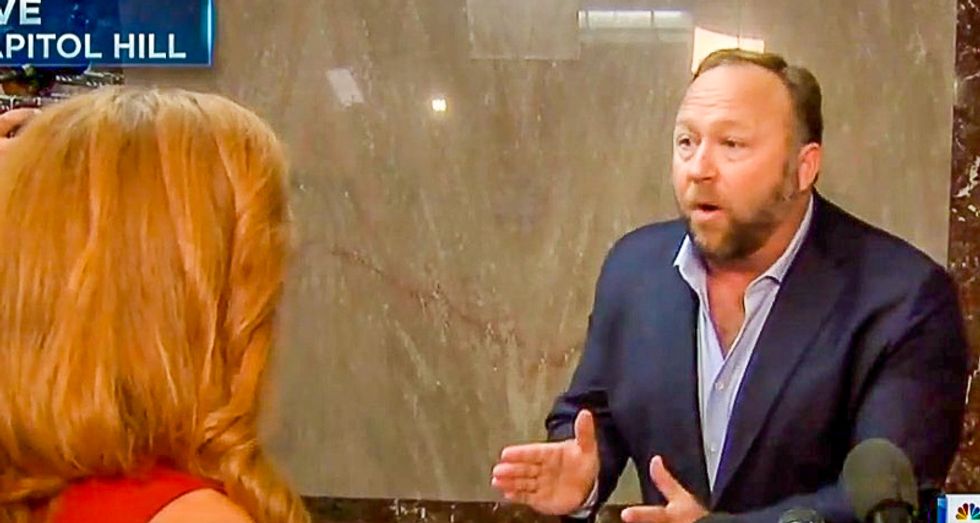 CNBC on Wednesday aired video of libertarian radio host Alex Jones shouting about how the government had not intervened when he was removed from social media platforms.

Jones was in Washington, D.C. on Wednesday to attend a Senate hearing on the weaponization of social media in elections. During a rant outside the hearing room, Jones insisted that Facebook, YouTube and others had violated the law by banning him for alleged hate speech.

"The media ran a hoax," Jones told CNBC's Julia Boorstin. "And said that I said things on Twitter that I didn't say. So they can say all day, I violated their terms. Jack Dorsey didn't take me off Twitter. And you, the so-called media, has been foaming at the mouth to get me further de-platformed so I can't respond to lies."

"They will have people who are CIA say, 'Alex Jones works for the Russians'," he continued. "That is an outrageous lie beyond Joseph McCarthy -- anything he ever did. But when McCarthy did it, the people got to come in and got to confront the committee and say, 'You have no decency. How dare you act like this?' This is a hundred times worse than anything Joseph McCarthy ever did."

Boorstin pointed out that Jones was attending a hearing about election interference, and it was not about his fight with technology companies.

"They claim they are taking Infowars down to stop election meddling," Jones replied. "Obama established with an executive order before he left office a special office that deals with 'foreign propaganda.' What it's really been used for is to target domestic popular groups -- the real election meddling is by Facebook and Google and others that are shadow banning people, they're outright banning people and they're blocking conservatives."

As Jones continued to rant, the CNBC control room cut his feed.