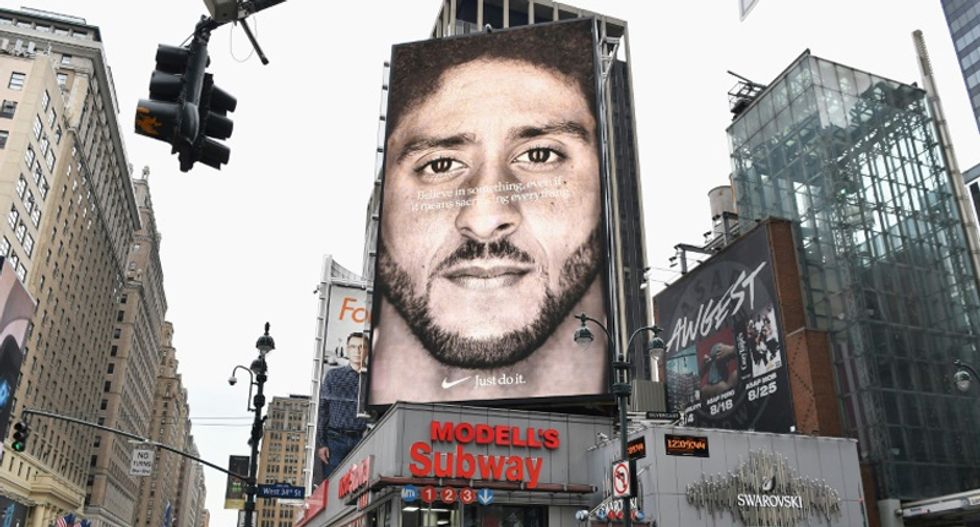 Nike launched an advertising campaign featuring Colin Kaepernick just before the start of a season in which players are continuing the former quarterback's kneeling protest. (AFP/File / Angela Weiss)

NFL players resumed kneeling protests during the pre-game playing of the US national anthem at Sunday's 2018 season openers as US President Donald Trump warned dimming TV ratings will plunge.

Miami Dolphins receivers Kenny Stills and Albert Wilson kneeled during "The Star-Spangled Banner" and defensive end Robert Quinn raised a fist during the song ahead of the team's season opener against visiting Tennessee.

The protests for social justice and against racial inequality, started by former NFL quarterback Colin Kaepernick in 2016, continued for a third consecutive season and Kaepernick tweeted his praise for Sills and Wilson.

"My Brothers @kstills and @ithinkisee12 continue to show their unwavering strength by fighting for the oppressed!" Kaepernick tweeted.

"They have not backed down, even when attacked and intimidated. Their courage will move the world forward! Love is at the root of our resistance!"

Just hours before Sunday's game, Trump tweeted about the dip in NFL ratings for Thursday's season-opening game compared to past seasons, hinting that players standing for the anthem could restore lost viewership.

"Viewership declined 13%, the lowest in over a decade. If the players stood proudly for our Flag and Anthem, and it is all shown on broadcast, maybe ratings could come back? Otherwise worse!"

Trump jumped on the issue a year ago at a rally in Alabama, calling any player who didn't stand for the anthem a "son of a bitch" who was insulting the nation and its military.

Players have steadfastly maintained their protest is aimed at social and racial issues while Trump has pushed that players should be fired for disrespecting the flag.

NFL owners, who did not have a policy on the matter, in May passed a policy forcing players to stand for the anthem on the sidelines or stay off the field.

But the NFL Players Association filed a grievance over the policy, saying it denied members freedom of expression, and talks could not resolve the issue before the season began.

ESPN reported Sunday, citing unnamed sources, that there would be no new policy regarding anthem protests this season.

Kaepernick has sued the NFL on charges of collusion, saying owners have conspired to keep him from having a job since he became a free agent last year. This is his second season without an NFL job after his protest-launching moves with San Francisco in 2016.

Kaepernick was the focus of a new advertisement campaign by sportswear manufacturer Nike that made its national debut on Thursday's opening NFL telecast.

Commemorating the 30th anniversary of Nike's "Just Do It" campaign, the message of the Kaepernick commercials is: "Believe in something. Even if it costs you everything."

Nike reported a 31% sales boost during the Labor Day holiday weekend this year over last year after the advertisement debuted online.

As thousands of Americans took to the streets to protest the U.S. Supreme Court, two Floridians got in trouble at a health clinic that offers abortion.

"A few hours after the Supreme Court announced its monumental ruling overturning Roe v. Wade on Friday, a small group of anti-abortion activists stood in front of the only Polk County clinic that offers the procedure. Soon after that, two of them were in the back of Lakeland Police Department vehicles," The Ledger newspaper in Lakeland reported Friday.

Donald Trump's conflicting statements on the Supreme Court overturning Roe vs. Wade combine to paint a sacrilegious portrait of the former president, according to an analysis in New York magazine.

After the court released its Dobbs vs. Jackson Women’s Health Organization, Donald Trump told Fox News that, "God made the decision."