Is a polygraph a reliable lie detector? 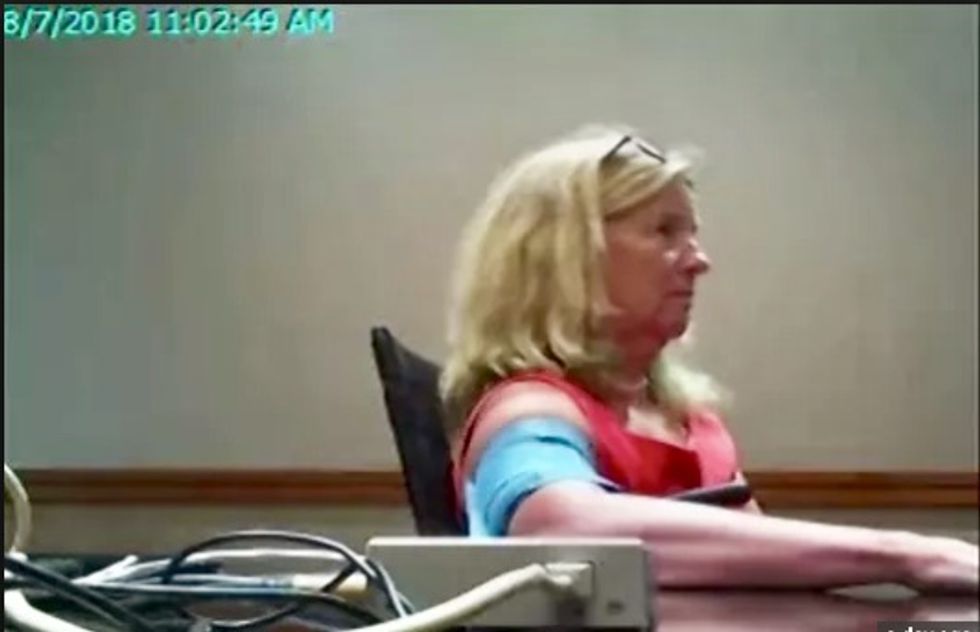 Attorneys for Christine Blasey Ford, the woman who’s accused Supreme Court justice nominee Brett Kavanaugh of sexual assault, released the results of a polygraph test focused on the decades-old incident. They suggest that Ford’s responses to two questions about her allegations were “not indicative of deception.”

How trustworthy is that assessment and the polygraph technology it relies on?

People have long yearned for some way to separate truth from falsehood, whether in high-stakes court cases or family kerfuffles. Over the years, inventors have developed an evolving assembly of tools and instruments aimed at figuring out whether someone is telling a lie. They’ve tried to incorporate increasingly more science, but with varying degrees of success. Society has often looked to instruments like the polygraph to inject some objectivity into the detection of deception.

As a defense lawyer, I’ve had many a client tell me that he or she did not commit the alleged crime. But I’ve never asked a client to submit to a polygraph exam: It’s high risk, low reward, and the results – while inadmissible in a criminal case – are unpredictable. Just how reliable is a polygraph at identifying who’s lying and who’s telling the truth?

Looking for signs of lies

Methods of lie detection have progressed from their torture-centric roots. Early techniques included subjecting someone to a water test: Those who sank were considered innocent, while floating indicated guilt, lies and witchcraft. Neither outcome was good news for the accused. In medieval Europe, an honest man was thought to be able to submerge his arm in boiling water longer than a liar.

Eventually people developed more humane methods, focusing on physiological factors that could be used as arbiters of truth. In the early 20th century, William Moulton Marston – self-proclaimed “father of the polygraph” – showed a strong link between systolic blood pressure and lying. Basically, spin a tale and your blood pressure rises. Martson also created the comic book character Wonder Woman, whose golden lasso can extract the truth from those it ensnares.

In 1921, physiologist John Larson, from the University of California, Berkeley, was the first to couple measurements of both blood pressure and breathing, looking at rises and drops in respiration. The Berkeley Police Department adopted his device and used it to assess the trustworthiness of witnesses.

In 1939, Larson’s protégé, Leonarde Keeler updated the system. He made it compact for travel and added a component to gauge galvanic skin response, which measures sweat gland activity that could reflect the intensity of an emotional state. His device, purchased by the FBI, was the precursor to the modern polygraph. Later versions were variations on this original. 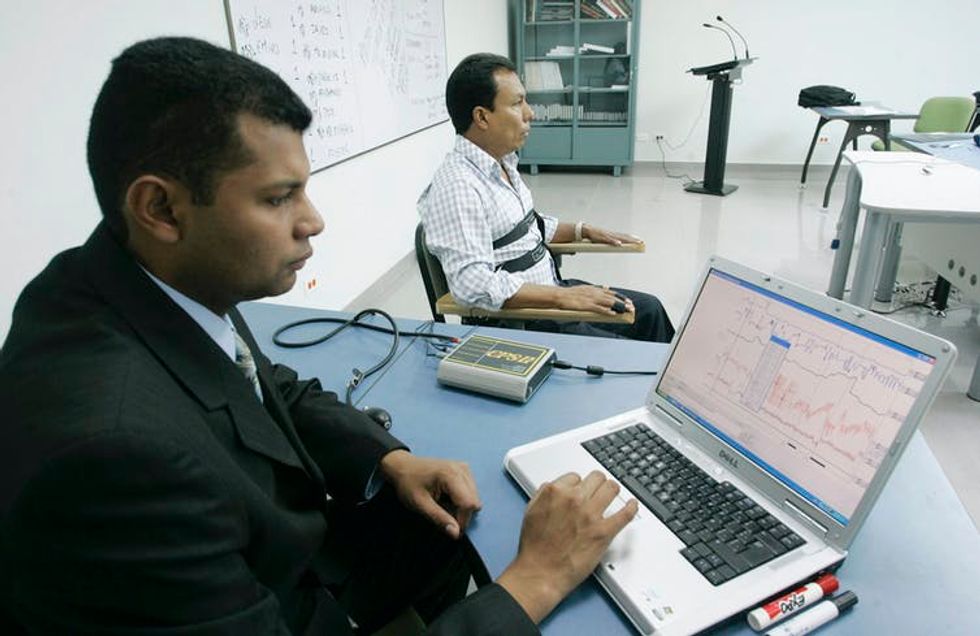 Sensors detect changes in how the subject’s body reacts to questions from the examiner.

“Lie detector” is a broad term. It most often refers to a polygraph, but also applies to a Certified Voice Stress Analysis, an fMRI brain scan, or even software used to analyze the word choice and variation a subject uses when recounting an event.

What today’s polygraph does is encapsulated in the word itself. “Poly” means many or multiple, and “-graph” means to write. The system records several physiological responses – most often perspiration, heart rate, breathing rate and blood pressure – and graphs them out visually for an examiner to interpret.

There are two most common approaches to administering a polygraph. In what’s called the Controlled Question Technique, an examiner will ask irrelevant questions, control questions and relevant questions. Then, based on what he sees in the graphical representation of the subject’s physiological responses, he will identify whether they change significantly in response to relevant questions. The underlying assumption is that deception will, due to the stress induced by lying, lead to a measurable response in the form of increased perspiration, heart rate and so on.

The second approach is known as the Guilty Knowledge Test, which is really a misnomer. It tests any knowledge of events, not just guilty knowledge. The examiner measures a subject’s response to specific questions in an attempt to discern whether the subject does in fact have personal knowledge of an event. This could be anything from knowing how many times a victim was stabbed to the color of the getaway car.

Presumably, a person who lacks knowledge of an event would not react significantly differently to the accurate answer because he or she wouldn’t know what’s right and what’s not. Meanwhile, so the logic goes, a person who has firsthand knowledge would demonstrate a physiological response. Of course, this method also has inherent limitations regarding, among other things, what types of questions may be presented. 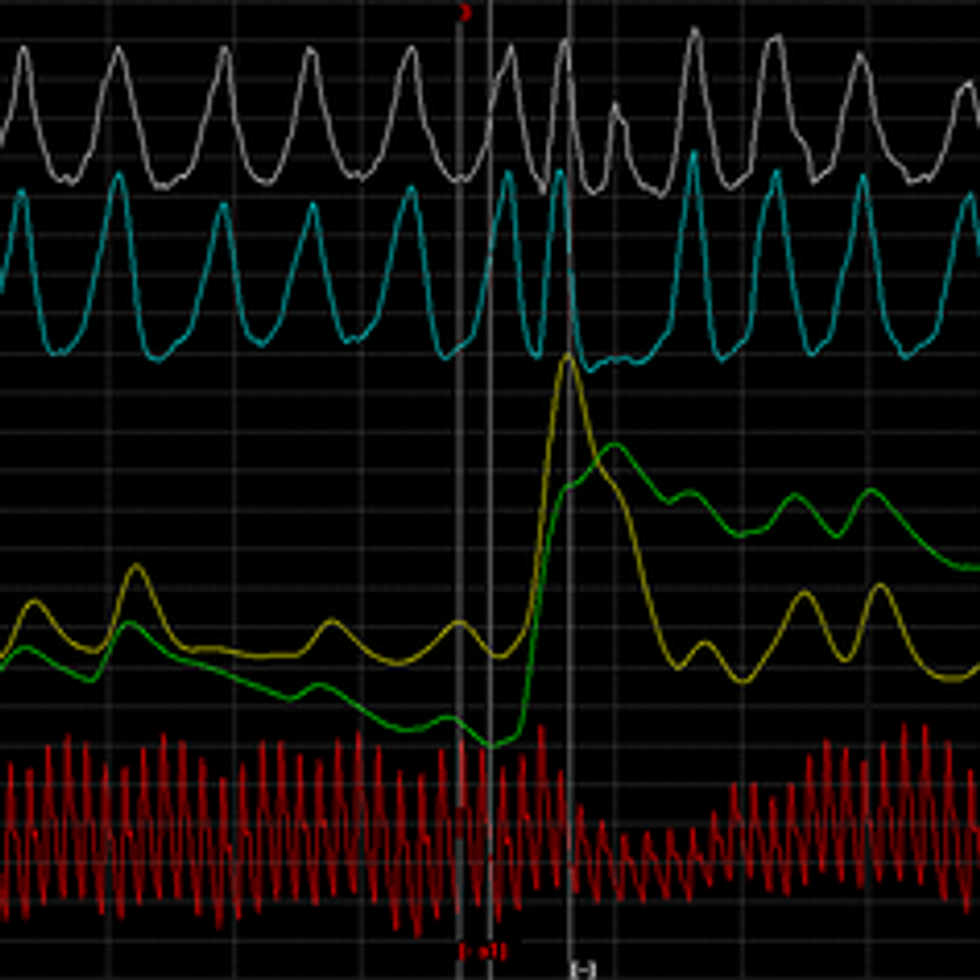 An examiner keeps an eye on how various measures change in response to particular topics or questions.

The efficacy of polygraphs is hotly debated in scientific and legal communities. In 2002, a review by the National Research Council found that, in populations “untrained in countermeasures, specific-incident polygraph tests (GKTs) can discriminate lying from truth telling at rates well above chance, though well below perfection.” Better than flipping a coin to figure out whether someone is telling the truth, but far from achieving consistent and reliable results.

The NRC warned against using polygraphs in employment screenings, but it did note that specific-incident polygraph tests in the field yield more accurate results. It seems targeted, relevant questions – for instance, “Was the robbery committed with a gun?” – meant to unmask a subject who may have a strong motive to lie or conceal information seem to work better.

Polygraphs can deliver false positives: asserting that someone is lying who is actually telling the truth. The consequences of “failing” a polygraph can be serious – from not getting a job to being labeled a serial killer.

In the 1998 Supreme Court case United States v. Scheffer, the majority stated that “there is simply no consensus that polygraph evidence is reliable” and “[u]nlike other expert witnesses who testify about factual matters outside the jurors’ knowledge, such as the analysis of fingerprints, ballistics, or DNA found at a crime scene, a polygraph expert can supply the jury only with another opinion.”

Notably, litigation over the precursor to the modern polygraph gave rise to the seminal Frye opinion from the D.C. Circuit in 1923, which held that the polygraph evidence was inadmissible in court. In 2005, the 11th Circuit Court of Appeals reiterated that “polygraphy did not enjoy general acceptance from the scientific community.”

The reality is that multiple factors – including nervousness in a high-stakes situation – can affect the readings detected by a polygraph machine, and give an impression that the subject is lying. For that reason, polygraphs are not generally admissible in any criminal case, even though police interrogators will sometimes trick a suspect into submitting to one. Polygraphs may be admissible in civil cases, depending on the state, and some states allow polygraph tests to be used in criminal cases if everyone agrees to it.

In short, polygraphs may offer some – albeit slight – confidence that a person is telling the truth about a particular incident. Studies have shown that when a well-trained examiner uses a polygraph, he or she can detect lying with relative accuracy.

But a polygraph is not perfect: An examiner’s interpretation is subjective, and results are idiosyncratic to the person being tested. Under the right circumstances, the polygraph allegedly can be fooled by a trained individual. Even some of my forensic evidence students “beat the test” when I bring a polygraph examiner in for a classroom demonstration.

Perhaps the 11th Circuit summed it up best: There is no Pinocchio factor associated with polygraphs. As much as we’d like a sign as obvious as a growing nose, there’s no 100 percent reliable physical sign of telling a lie.

A polygraph examination demonstrates “that the examinee believes her own story.” And perhaps that’s enough. A subject’s willingness to even submit to an exam often reveals a level of veracity and can fill a void when the other party has not similarly submitted to an exam.

In an otherwise normal football season, two California high schools abruptly canceled the remainder of their games for the same reason. Players on both teams participated in troublesome acts of racism.

I reached two big conclusions. First, I found that adults often think that kids can’t understand science fiction – but they can. Second, I found that authors and illustrators are not depicting characters from diverse backgrounds in children’s stories about the future. As a researcher who specializes in children’s literature, these findings make me wonder if the reason there is so little diversity in children’s science fiction is because authors don’t believe that their readers will be children from diverse backgrounds.