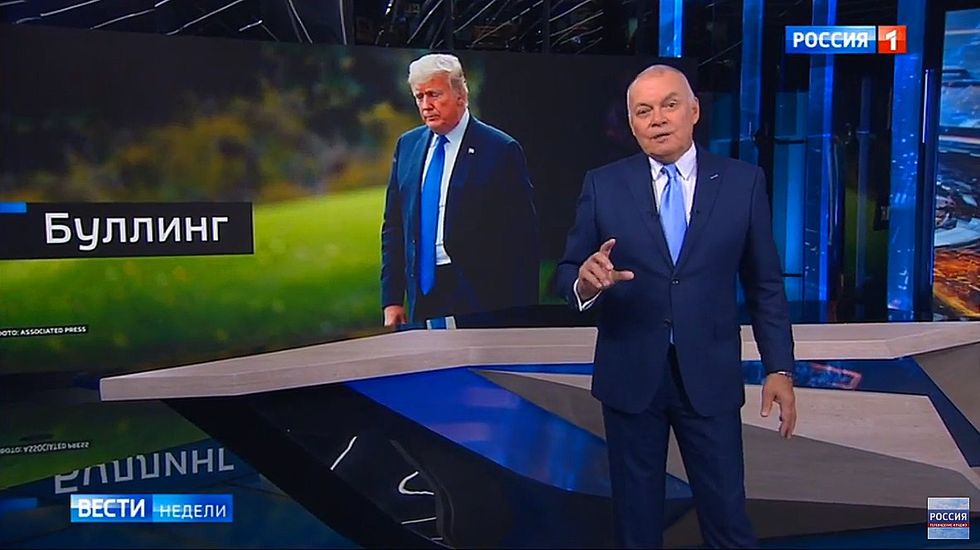 On Sunday, Russia media monitor Julia Davis revealed the latest examples of how Kremlin-sponsored news programs are coming to the defense of Trump.

Reporters paid by the Russian Federation have recently taken to referring to the Republican Party as "The Party Of Trump," Davis said.

During one news program, Davis said that the Russian host defended the size of the U.S. president's penis after adult film actress Stormy Daniels, in her new book, compared it to "the mushroom character in Mario Kart."

"Russia's state TV is defending Trump with gusto, down to the size of his unmentionables," Davis explained. "The Kremlin's top propagandist, Dmitry Kiselyov, claims Trump is being 'bullied' and Stormy's expectations are unreasonably high, in light of her occupation. Sorry, trying to keep it PG-13."

#Russia's state TV worries about the outcome of the midterms, refers to the GOP not as the Republicans, but as "The… https://t.co/vqvuOHCCcN
— Julia Davis (@Julia Davis)1537722672.0

#Russia's state TV is defending Trump with gusto, down to the size of his unmentionables. The Kremlin's top propaga… https://t.co/KOhV75DFdl
— Julia Davis (@Julia Davis)1537724152.0