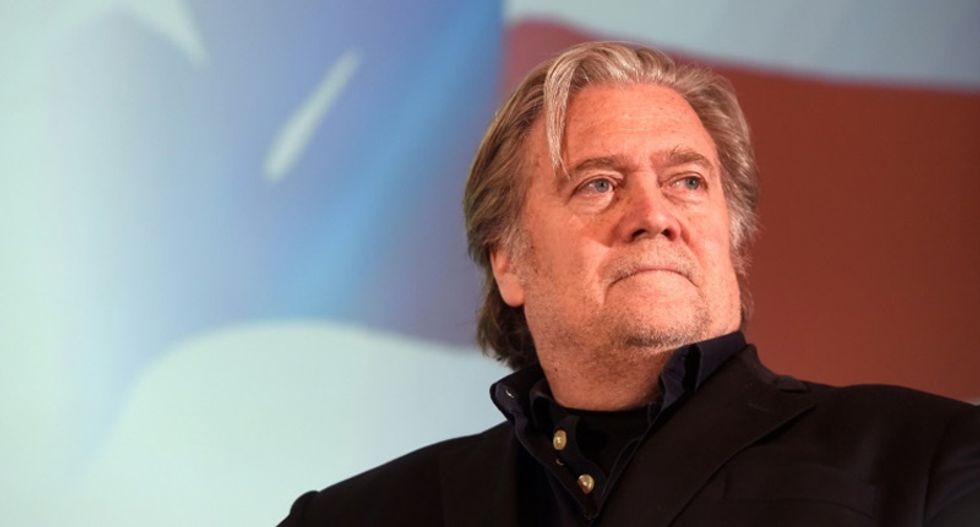 America is heading for a revolution which will "cut like a scythe through grass", Donald Trump's former chief advisor Steve Bannon predicts in a revealing new film.

The man credited with putting Trump in the White House warns in a documentary which premiered at the Venice film festival Wednesday that "if you don't allow for some way to spread the wealth, there will be a revolution in this country."

"We are going to have another financial crisis -- anyone who is smart sees it's coming," Bannon told Errol Morris in a series of long interviews for "American Dharma".

The film was shown in Venice as critics reeled from "22 July", a harrowing reconstruction of the 2011 attacks in Norway carried out by far-right extremist Anders Behring Breivik in which 77 people were slaughtered.

"I believe you need radical restructuring," Bannon declared. "It can't be a pillow fight. You need killers to get change.

"That is why Trump is president," he told Morris, who won an Oscar for his confessional film "The Fog of War" about the architect of the Vietnam war, Robert McNamara.

"It was clear as daylight that someone like Trump was coming," Bannon added.

The political strategist claimed a "superstitious" Trump was heading for a crushing defeat in the 2016 election when he took the reins of the campaign.

He admitted he relied on some PR "jujutsu" to rescue Trump after the leak of his "grab them by the pussy" remarks to Billy Bush threatened to sink the campaign.

This included bringing women who had accused Bill Clinton of rape and sexual impropriety to a crucial television debate.

But Bannon refused to say whether he had a hand in the WikiLeaks dump of Hillary Clinton's emails minutes after the so-called "Access Hollywood" tape of Trump's remarks was released.

The former head of right-wing news website Breitbart, in Venice for the film premiere, said he didn't know Trump before the campaign, but saw his potential.

Bannon said he had simplified the campaign to a series of populist slogans: "Build the wall" (with Mexico), destroy the Islamic State, confront China and "get the hell out of Iraq and Afghanistan".

He had urged the president to "drop the hammer" as soon as he got into office with a flurry of executive orders including the hugely divisive "Muslim ban".

"If you hit the media with five things at a time, three will go through. They can only handle so much," Bannon said.

- Told Trump not to sack Comey -

He revealed that Trump could be naive -- "he thought the New York Times would wish him well when he won" -- and said the president fired FBI chief James Comey against his advice.

"Sacking Comey was a mistake. The institution of the FBI is going to bleed you out after that."

Trump was not corrupt, Bannon insisted. The multiple financial scandals he has been embroiled in "is just the real estate business".

But the former Goldman Sachs financier said he won the election for the billionaire property tycoon by portraying Clinton as "the head of a corrupt, creaking elite and Trump the agent of change like Obama."

After Trump's election, Bannon said, he was "just another advisor in the White House (but one) with a big bark."

Bannon admitted he is a product of the same "scientific-engineering-management-financial elite" he blames for bleeding the American "common man" of hope and jobs.

But he was now "on a mission to turn the Republican Party into a workers' party. You may have better food and clothing than an 18th-century Russian serf, but you are the same. They have you hung up on credit card debt... and their algorithms control your life."

Bannon said he was helping what he called the "patriotic right" in Europe, while insisting that "Neo-Nazis are an invention of the oppositional... left-wing media."

He is not bitter about being sacked by Trump in August 2017 in the fall-out from protests over a white supremacist rally in Charlottesville, Virginia, the political operator insisted.

"I didn’t take it personally," he said. "It was the order of things" -- part of his belief in dharma, the Hindu concept of duty and destiny that order the Universe.

Morris faced hostile questioning for some journalists accusing him of "falling into Bannon's trap... and giving him a platform".

But the director pointed out that in the documentary, Bannon accepts being compared to Lucifer in Milton's poem "Paradise Lost".

"I have never interviewed anyone who willingly embraced the idea that they might be Satan, but he loved the idea, and finished the quotation, 'Better to reign in Hell than serve in Heaven.'"

Morris told AFP that Bannon had seen and "liked the film. It is possibly not my best review."