Urbanites can be divided into six different tribes, to help make cities fit for all 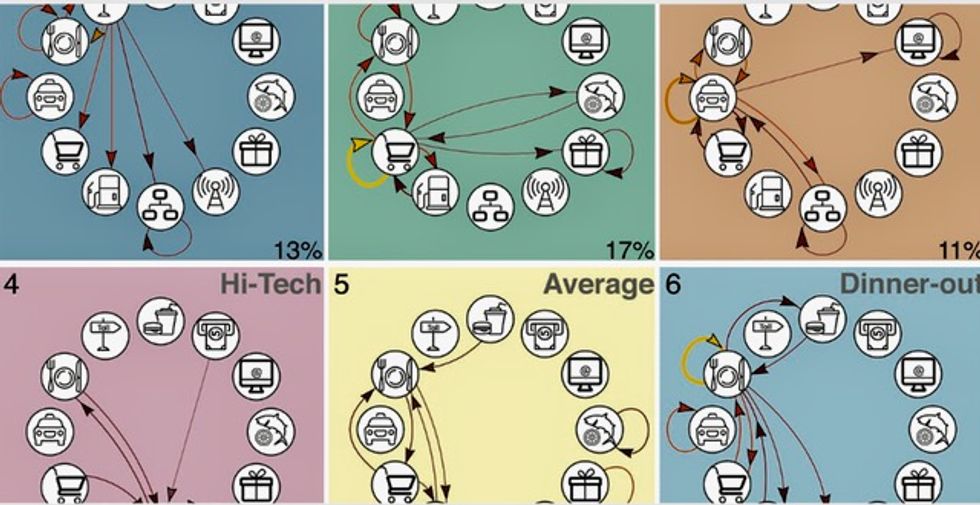 Whether tapping a contactless card to take the subway, buying a gift for a loved one or using a smart phone to find the way home, your everyday actions leave behind breadcrumbs of digital information. When these traces are collected and analysed en masse, they can help urban planners to pick up on the daily rhythms of the life of a city and uncover trends about the people who live there.

In a recent study, we developed a new mathematical framework which extracts various spending habits or lifestyles from the digital traces left by credit cards and mobile phone data in Mexico City. We discovered that purchase habits not only related to socio-demographic characteristics such as age, gender, income and mobility – they also related to the places people visit, and the people they call.

Over the past decade, smart phone data has helped researchers to understand and plan cities. For example, location data is used in transport planning to identify which stations and routes are busiest at different times of the day. For example, scientists have found that people don’t necessarily take the optimal route to their destination – instead, they have a favourite route for trips they perform routinely, and a few alternative routes which they take less frequently. 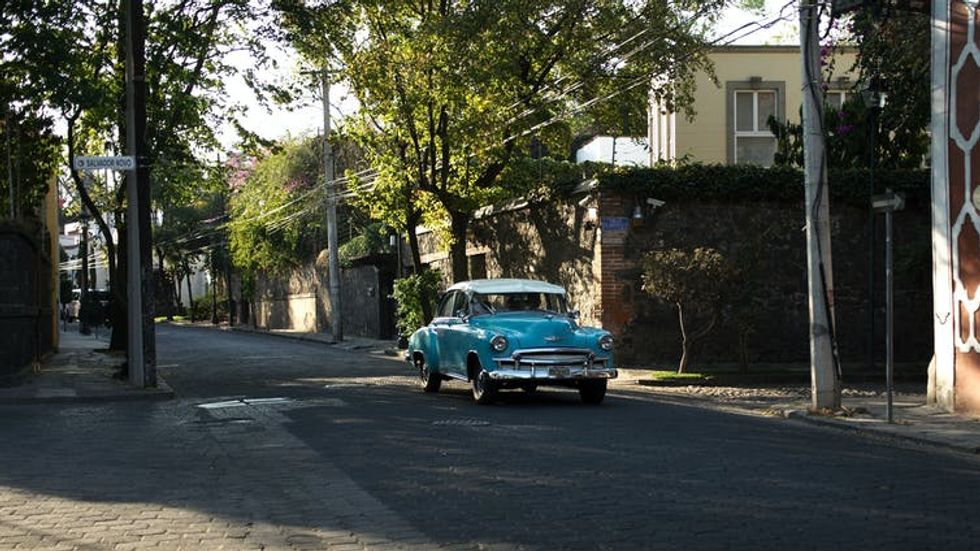 Meanwhile, credit card data and spending behaviour data have been used from the retail companies to build a profile of consumers, based on their set of purchases. This is illustrated by the parable of the beer and nappies. As it turns out, on Friday evenings, young men who buy nappies also have a predisposition to buy beer – this group became parents.

When analysed across the years, these digital traces can help scientists and governments to understand at an unprecedented scale how societies in different parts of the world cope with major events, such as recessions or major policy changes.

From the detected spending habits, we identify six groups or “tribes” while protecting people’s privacy by aggregating the data and ensuring they were anonymous. Each of these groups has a core purchase, which is the most frequent of their spending activities, indicated by the yellow arrows in the figure below. 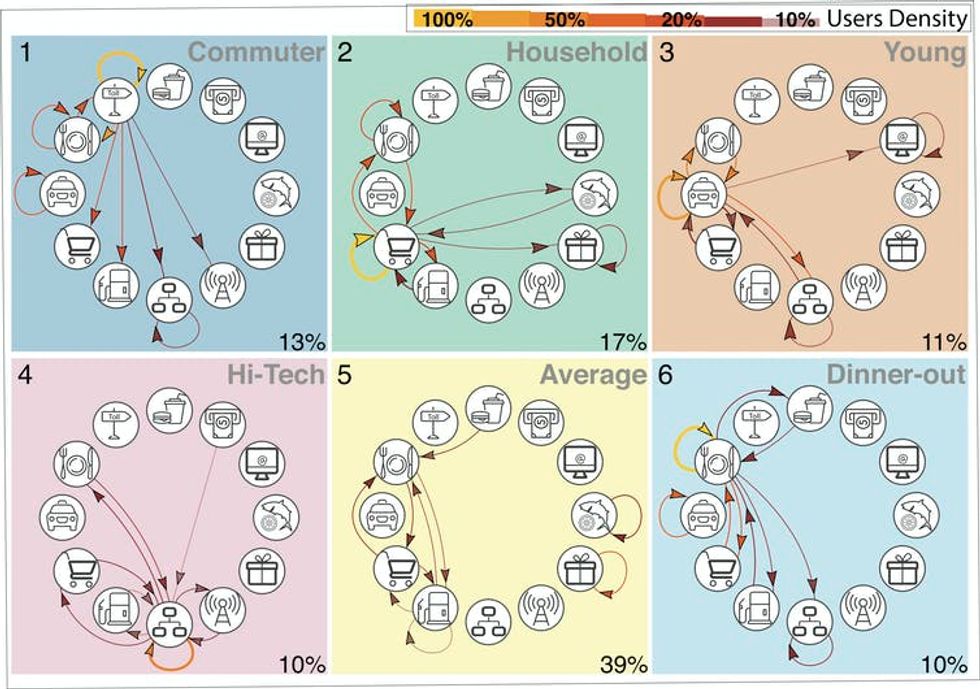 Our six lifestyle groups: the colour of the arrows represents the frequency of the transactions, from yellow (most frequent) to red (less frequent).

The “commuters” tribe is mainly made up of adult men who live far from the city centre. They commute by car (paying tolls), earn above average incomes and enjoy eating at restaurants.

Middle-aged women dominate the “household” tribe and tend to have the least expenditure and mobility. Their core transaction is grocery shopping, they have lower incomes and live in the suburbs. On average, members of this group receive more phone calls from the other tribes.

Young people are split between two tribes. The “young”, who are under 30 years old, live in the city centre, mainly use taxis as means of transportation and have an average income.

The second group, called “high tech”, is slightly older, with an average age of 35. Their core transactions are on technology such as smart phones and computers. They could be young professionals, since they have higher than average expenditure, a wide range of contacts in their mobile phones and do most of their activities downtown. 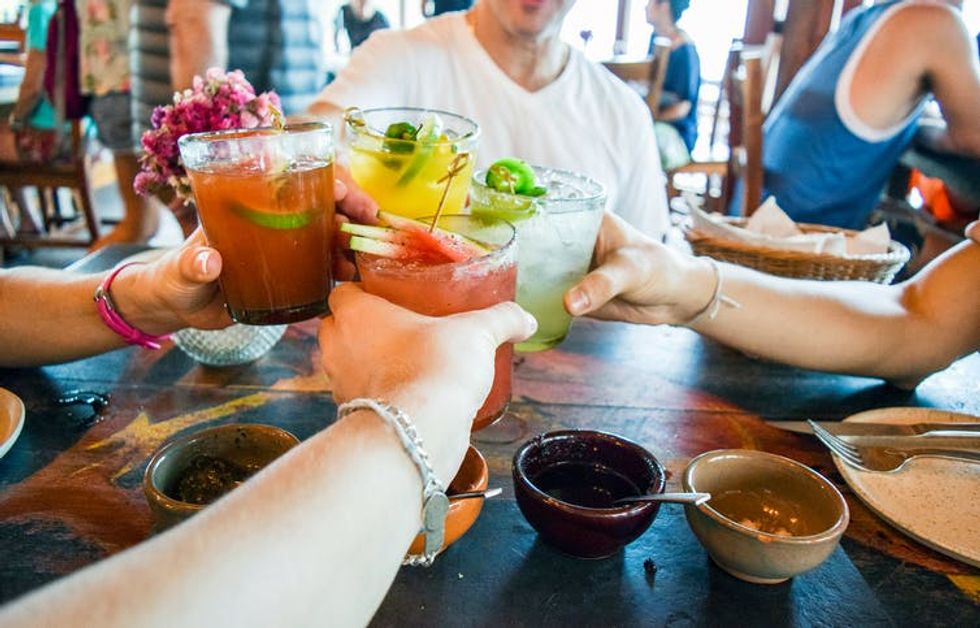 The “dinner out” group lives closer to the city centre. Their core transactions are restaurants. They also have more contacts in their social network than average.

We also created an “average” group from a random sample of citizens, to use as a benchmark, against which we could compare the spending habits and socio-demographic information of the other tribes.

By generating useful information from these digital traces, we hope to help cities to embrace the digital revolution and resolve important urban issues, such as how to make cities more inclusive.

For example, the commuters tribe may be hit hardest by fuel price increases which may affect their spending and commuting. The creation of inexpensive and efficient public transport systems may be an important investment in urban areas, especially those where low-income residential areas and job opportunities are not in proximity. And to help the household tribe, we could consider introducing nutrition subsidies – programmes to incentivise low-cost grocery stores in areas where it’s difficult to find affordable, good quality food.

What’s more, our study shows that it is possible to gather information about daily mobility, social contacts and lifestyles by collecting the data that people already produce, rather than undertaking surveys which are expensive, time consuming and very limited in sample size.

This kind of analysis can help city authorities make informed decisions based on data about an unprecedented number of people and lead to more tailored policy to the specific needs of different groups and lifestyles.