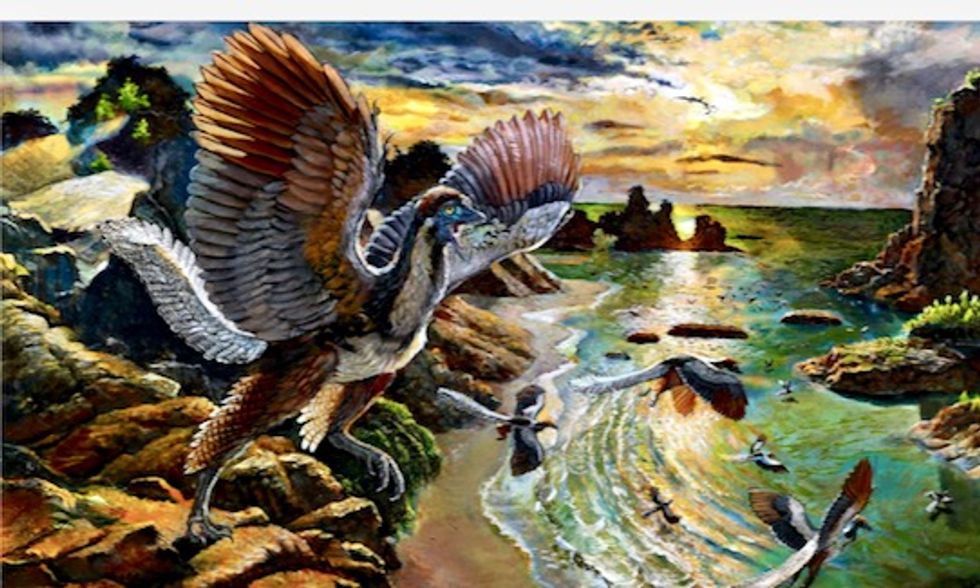 Perhaps one of the world’s best known fossils is Archaeopteryx. With its beautifully preserved feathers, it has long been regarded as the first bird in the fossil record, and is often called “the icon of evolution”. Only a handful of specimens have ever been found, its elusivity adding to its fascination.

But was it really the first bird – and could it really fly? Given that we now know birds descended from dinosaurs, was Archaeopteryx actually just another small dinosaur with a feathery covering?

My colleagues and I had the rare opportunity to examine an Archaeopteryx skeleton using one of the world’s most powerful synchrotrons, a type of particle accelerator rather like an X-ray machine but ten thousand billion times brighter than those in a hospital. We were able to see inside the rock and uncover fragments of bone that had never been seen before. What we discovered surprised us: this was an entirely new species of Archaeopteryx.

The first Archaeopteryx fossil was uncovered in the Jurassic limestones of Bavaria, in the summer of 1861, just two years after the publication of Darwin’s Origin of Species. It appeared to be one of Darwin’s predicted “missing links”, the link between reptiles and birds, specifically between dinosaurs and birds.

It certainly looked like a bird, with delicately preserved feathers on its wings and a fan-shaped tail. It also had a wishbone or “furcula”, just like you find in a roast chicken. And both of these features were thought at the time only to occur in birds. But Archaeopteryx also had some very reptilian features – a long, bony tail, and a jaw filled with very sharp teeth – and seemed to be part way between the two groups of animals. 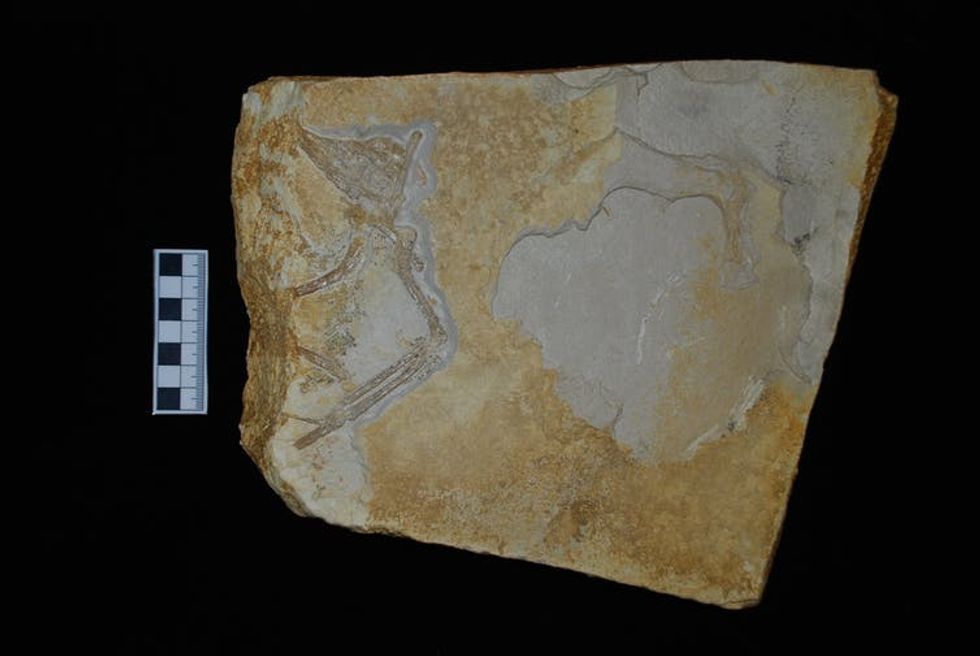 A second specimen was found in 1876 but Archaeopteryx fossils have generally remained elusive and we still have discovered only 12 specimens. One of these has been lost and several others are fragments.

Despite more than 150 years of study, we still have much to discover about this primitive bird. Much of the controversy surrounds the question of whether Archaeopteryx could fly, the consensus being that it was at best a “feeble flapper”.

The eighth specimen to be discovered was one of the least well-known. It was found by a private collector in a quarry near Daiting in Bavaria, Germany, in the early 1990s, and changed hands several times before being sold on cheaply to another private collector in the belief that it was a common pterosaur. It is rumoured that the finder, on realising what he had done, threw himself off the top of the quarry, as these specimens can change hands for millions of dollars.

The new owner, perhaps feeling guilty, was very secretive about his purchase, and the scientific community was unaware of this specimen until 1996 (hence its nickname, “the phantom”) when a cast of the specimen was shown briefly at the Naturkundemuseum in Bamberg, Germany. Then, in 2009, dinosaur hunter Raimund Albersdörfer, also from Bavaria, purchased the specimen and in 2011 made it available to our research team for scientific study. 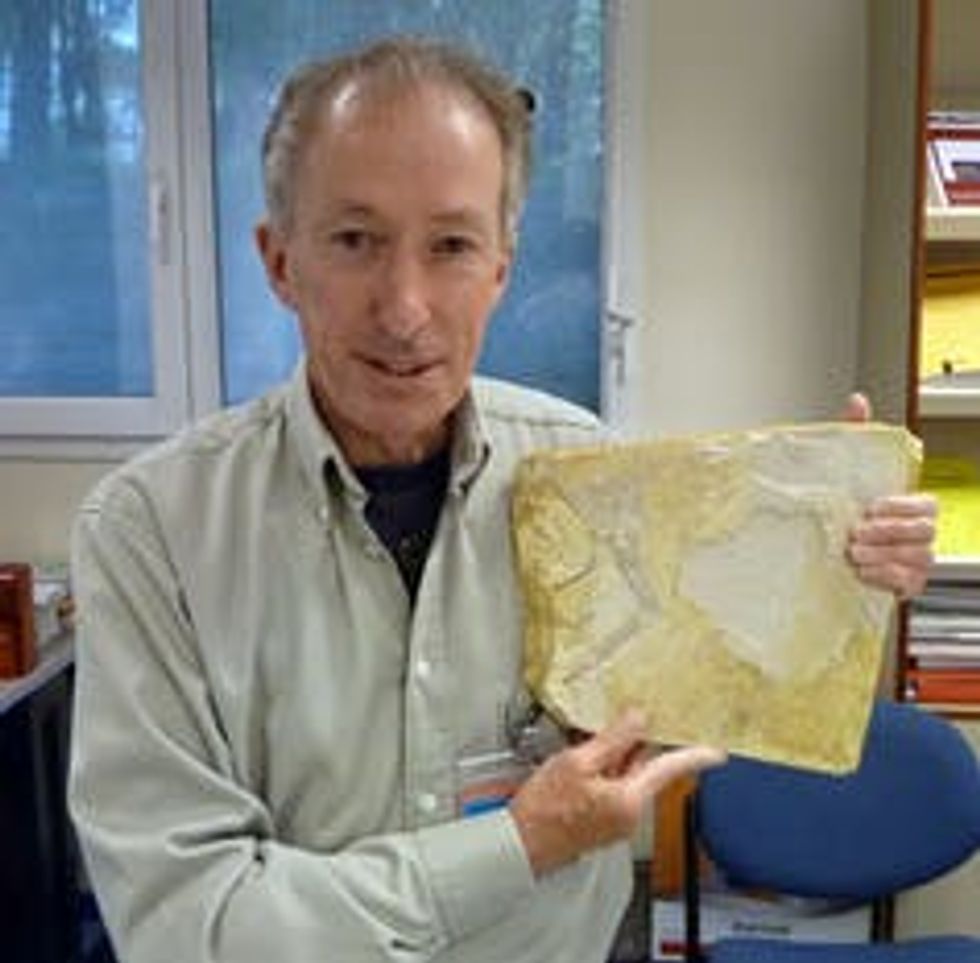 John Nudds with the fossil.

It is not well preserved and we nicknamed it “the ugly bird”, for the bones had become disconnected after it died and were jumbled together and crushed. The lower half of the body was missing completely. But we took it to Grenoble, to the European Synchrotron Radiation Facility (ESRF), where we were able to perform a virtual dissection of the skeleton, and piece together fragments of bones that had been broken when the animal died 150m years ago.

All of the specimens of Archaeopteryx had been classified as a single species, Archaeopteryx lithographica, but this one seemed to be different. It had also been collected from a different layer in the rock record than the others, which had all come from the well-known Solnhofen Formation. Our specimen was collected from the Moernsheim Formation, which lies above the Solnhofen Formation and is considered to be around half a million years younger.

We first noticed that the skull bones were fused together. Then we spotted that the furcula had a knob-like extension, which in modern birds is an attachment for the powerful flight muscles. Neither of these features were seen in Archaeopteryx lithographica. An expanded opening in one of the bones of the shoulder-girdle (called the coracoid) suggested that a large nerve passed through this bone, again suggesting a more powerful wing stroke.

But our biggest surprise was when we noticed that the bones of the wrist were fused together – another feature of modern birds known as the “carpo-metacarpus”. This provided a rigid structure that would have allowed the wings to make a powerful downbeat. 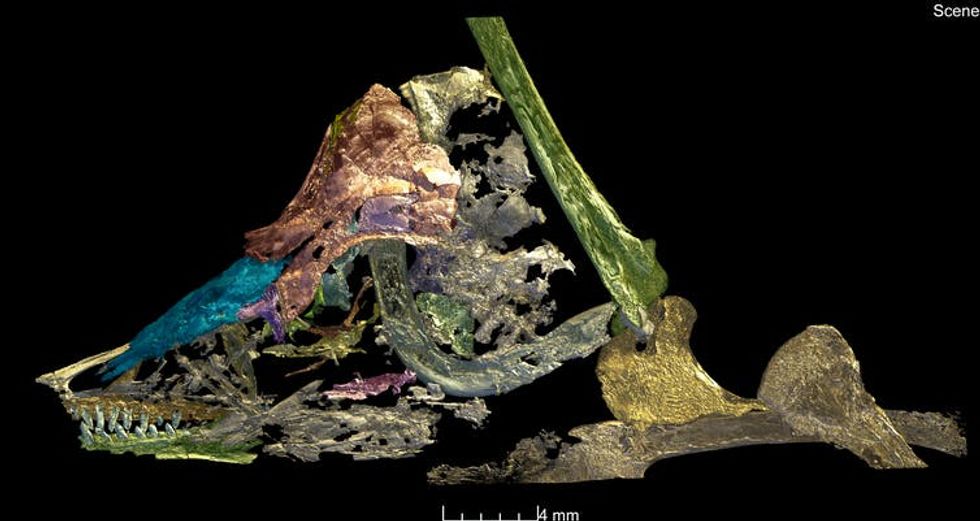