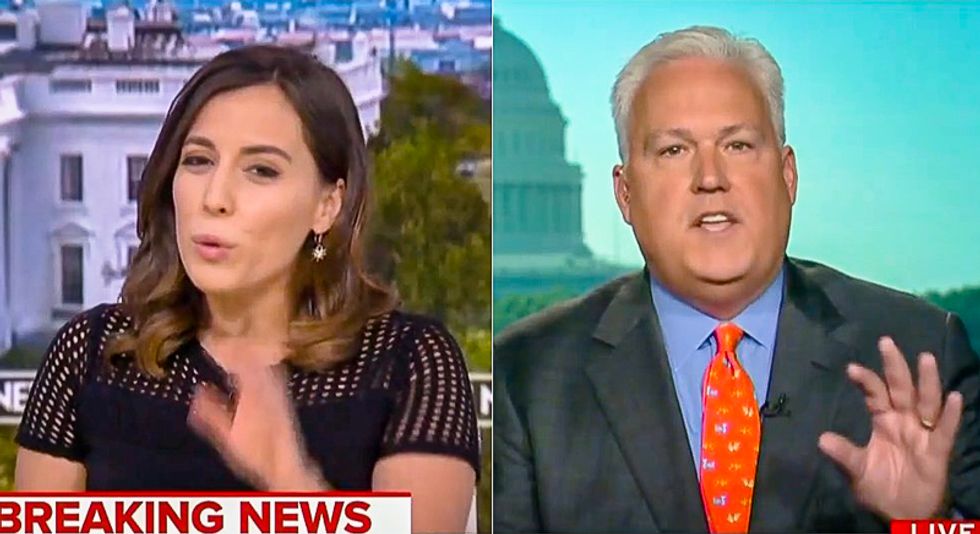 Conservative activist Matt Schlapp became agitated and shouted at an MSNBC host on Thursday after blaming the recent mail bombs on bad "manners."

During an interview on MSNBC, host Hallie Jackson asked Schlapp if President Donald Trump bears any responsibility for at least seven explosive devices that targeted Democratic figures on Wednesday.

Schlapp answered by pointing out that Republicans have been "run out of restaurants, told that there's no place in society for them."

"They have to literally eat their meal in their homes because people [verbally] attack them," Schlapp continued. "I think the problem we're going to get into now with your question is, who's at fault?"

"I think we're all at fault," the conservative activist opined. "Because we've lost our manners. I, myself, I find, I have to remind myself, like, we're each human beings and we ought to be treated with some respect."

According to Schlapp, "there's a lot of blame to go around" and the "mainstream media has a lot to do with why we communicate like this."

"You talk about manners here," Jackson noted. "You talk about the climate that we're in, you mention the media.... Does President Trump himself and the language that he uses and the way that he conducts himself bear any responsibility for the lack of civility that you're talking about?"

Schlapp quickly forgot about his own lesson on manners, raising his voice at Jackson.

"Each one of us does!" Schlapp exclaimed. "I think the difference with Trump is much of the coverage, starting last night, turned into this: Trump is responsible for the fact that our politics seem to be more coarse. And that's exactly the problem! Which is, people in the media, too quickly, want to blame Trump for almost everything!"

"Do you know what's it's like to have the former top law enforcement official in the United States -- like Eric Holder -- say it's okay to kick people like me?" the conservative griped. "I don't think that's appropriate! I want to see that highlight reel!"

As Jackson made her point, Schlapp continued to shout: "It's assault and battery! He shouldn't say it! Nobody criticized him except Michelle Obama!"

"He specifically said that it was a metaphor," Jackson reminded Schlapp.

As Jackson tried to formulate her next question, Schlapp refused to stop yelling at the MSNBC host.

"My head wanted to explode," Reines explained. "He has no point. And I'll tell you why. Matt is doing what is the absolute problem here. He is somehow equating Sarah Sanders getting a free cheese plate and being politely asked to leave before her Cornish hen supper comes out with someone sending bombs to murder Barack and Michelle Obama, Bill and Hillary Clinton, sitting members of Congress."

"These are not the same," he added.