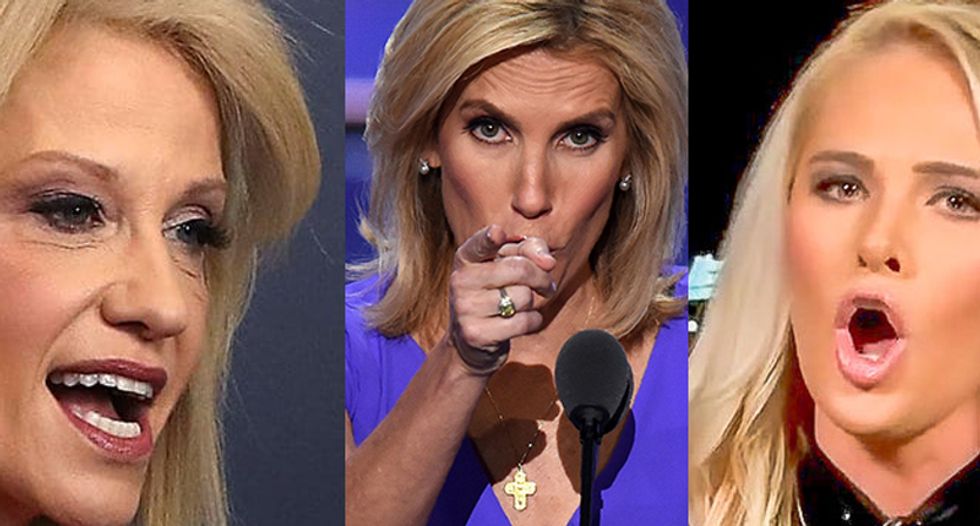 Are Republican women ever going to get fed up? It's the question that keeps cropping up after every incident of Republican political leaders minimizing, denying or excusing sexual harassment and abuse. So far, the answer is no. Republican women did not turn on Donald Trump after a tape was released featuring him bragging about sexual assault. Republican women did not turn on the party when it backed Roy Moore's campaign for a U.S. Senate seat in Alabama, despite numerous reports of him creeping on teen girls as an adult man. Now the question is being raised again, in light of the allegations of sexual assault against Brett Kavanaugh, Donald Trump's nominee to the Supreme Court.

After Thursday's hearing — when it became clear that Kavanaugh's principal accuser, Christine Blasey Ford, was credible and backed by ample evidence while Kavanaugh himself appeared to lie multiple times under oath — the question arose all over again. Are Republican women finally going to wake up, realize that their party leadership sees them as second-class citizens, and fight back?

A survey of media reports suggests there's a lot of people who dearly hope so. "Here’s Why White Women Are Abandoning the GOP," blared a headline at the Atlantic.

Other coverage, however, suggests a different story. Politico ran an article recently declaring that "party loyalty trumps #MeToo" for female Republicans. Local news covered rallies of women supporting Kavanaugh. The Associated Press ran a piece in which Republican women expressed skepticism about Ford's account and doubled down on their determination to support Republicans. Conservative pundits like Kellyanne Conway and Mollie Hemingway minimized the nature of the accusation, denying that what Ford described on worldwide live TV — being held down with her mouth covered, while an older teenage boy tried to remove her clothes — constituted assault and suggesting it was more like innocent flirting.

So what's the story here? Are Republican women getting fed up or not?

“Probably some of them are turning" on Kavanaugh, said Marjorie Spruill, a retired history professor and the author of "Divided We Stand: The Battle Over Women's Rights and Family Values That Polarized American Politics." "But the vast majority of them, I doubt that they would, because they are committed to him on the basis of the policies that he would promote, just like they were with Trump."

Theses polls also found that Democratic and independent men were far more skeptical of Kavanaugh than Republican women -- and by wide margins.

While this might surprise casual observers, it did not surprise Undem, who told Salon, "Gender equality is very much a partisan issue," and noted that her own research has shown, over and over again, that Republican women are nearly as good at denying and minimizing sexism as Republican men. They tend to sign off on the same view that sexism isn't really a problem, but is largely something women make up to get attention or score political points.

For instance, Undem pointed out, the majority of women who voted for Trump, like the majority of men who did so, agreed with the statement, "Most women interpret innocent remarks or acts as being sexist."

In a recent focus group, when Undem asked about the issue of the two parties' views on gender issues, she said she got "just blank stares" from Republican women.

This has been going on for decades, Spruill said, arguing that much of the political polarization of this moment reflects the way conservative women have aggressively organized in opposition to feminism. She pointed to the way anti-feminist women in the 1970s "redirected the Republican Party away from its traditional support for women’s rights" and shaped it into the boldly sexist party it is now.

While most of the focus of the gender fight of recent decades has been on issues like equal pay or abortion rights, Spruill observes that other questions directly relevant to the Kavanaugh case have long played a role. "Phyllis Schlafly and the Eagle Forum, for years, were opposed to a lot of what feminists said and did to try to protect women from violence, domestic abuse and sexual violence,” she said.

Schlafly's extensive history of bashing feminist efforts to prevent domestic violence and sexual abuse is still easy to find online. She railed against the Violence Against Women Act from its inception, claiming that it encouraged divorce and taught women to hate men. When Anita Hill stepped forward to accuse Clarence Thomas of sexual harassment in 1991, Schlafly argued that Hill was to blame for the harassment because she hadn't pushed back, and suggested that women in the workplace would have to learn "to thrive in a hostile environment."

The echoes of Schlafly's argument can still be heard in Laura Ingraham portraying Christine Blasey Ford as hysterical for being upset at an attempted rape or conservative legal commentator Sidney Powell describing stifling someone's screams after locking them in a room as "a fumbled attempt to make out with a girl at a party." Sexual abuse or assault by men and boys is treated, within this worldview, as something women must simply put up with. If women are upset or traumatized by it, that's held out as evidence that they are weak and undeserving of concern.

This kind of rhetoric is disturbing, but it is worth remembering that Republican women tend to live with Republican men. Choosing to be married to or live with men who make excuses for this sort of behavior means either getting on board — and perhaps even convincing yourself that it makes you "tough" to put up with it — or living with a degree of cognitive dissonance that is far more than most people can bear.

Undem emphasized that while most Republican women are sticking by their party and their men, however, a small percentage are getting wobbly — around 15 percent, the same proportion that now opposes Kavanaugh's confirmation. In plenty of congressional districts -- and nationally in the 2016 presidential race -- elections are won on the margins. Even a few percentage points of Republican women going sour and quitting the party in disgust could turn the electoral tide in 2018, and might make an even bigger difference when the pussy-grabber-in-chief is up for re-election in 2020.