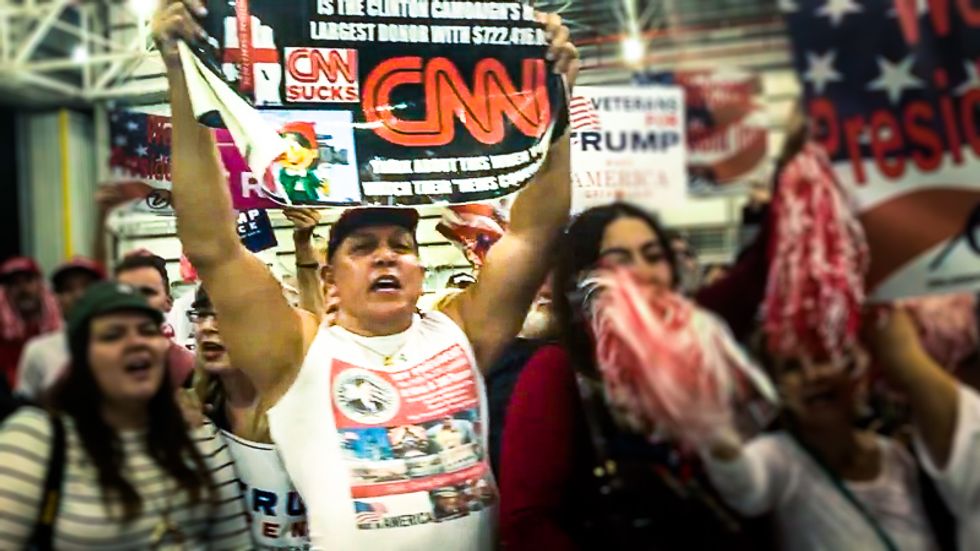 Cesar Sayoc, the man accused of sending mail bombs to liberal public figures, was caught on video attending a rally for Donald Trump after he became president.

Filmmaker Michael Moore on Sunday revealed the clip, which he said was a February 2017 outtake from his Fahrenheit 11/9 documentary.

In the video, Sayoc can be seen chanting "CNN sucks" along with the crowd. CNN was one of the targets of Sayoc's mail bombs.

"Here with our footage I can show you what he had actually become -- overdosed on steroids in what looks like some desperate attempt to hang on to what was left of his manhood," Moore explained in a Facebook post. "Men, people like Cesar have been led to believe, were and are under attack by the likes of Hillary and Michelle and all those 'feminazis' who’ve had but one mission: political castration. The theft of power from the patriarchy that had been in place for 10,000 years. The end of men."

Here in this outtake from "Fahrenheit 11/9" is 3 minutes and 38 seconds of raw, unedited footage -- and you can see what Sayoc had become by early 2017, his body grossly deformed into what he thought a man should be, muscles the size of basketballs, a sleeveless white T-shirt, a big anti-CNN sign and, along with his fellow Trumpsters, yelling at the journalists who had gathered in the media pen. He stayed long after Trump’s departure so he could be in the front row along the barricade inside the rally. You'll see him two or three times, but if you pause on him you will also see something profound. Underneath his threatening Hulk-like exterior, there is fear in his eyes and, for a quick moment, he looks more like he feels that he MUST be here, not that he wants to be here. You can see he is already gone, a lost dog, with nowhere left to go, no direction home.

What do we do with the thousands of other Cesar Sayocs? They have been told by Trump that they are at war -- WAR! -- against the rest of us, the vast, vast majority who believe climate change is real, that women are equal citizens with an absolute right to control their own reproductive organs, that the free enterprise system is a hoax designed to destroy the middle class, and that all people have a right to easily cast their votes without any interference. Cesar and his bros ARE at war, against all these things, against us, the majority, and they are at war inside of and against themselves. This is why they will lose, but not before they take a few of us with them.

Needless to say I was a bit shaken to see that Sayoc had placed a photo of me with a crosshairs target over my face on the side of his van. Over the past 15 years I have encountered men like him many times. I stopped counting the death threats long ago. I've been assaulted more than a half-dozen times (men with knives, clubs, hot scalding coffee thrown at my face) and the man who was making a fertilizer bomb (a la Oklahoma City) to blow up my house, thwarted only by his AK-47 which went off accidentally. A neighbor heard it, and off to prison he went.

On Sunday, Fox News guest Emily Jashinsky argued that CNN was to blame for hate against network because it had not made an effort to understand people like Sayoc.

“They had a device sent to their headquarters — whatever,” Jashinsky said. “When you see at rallies people chanting, ‘CNN sucks’ — I would never do it personally — but CNN makes no effort to understand why people feel that way. They do the opposite. Right? They act like they are the victims, that they’ve done nothing wrong to deserve this.”

Watch the video below via Michael Moore.