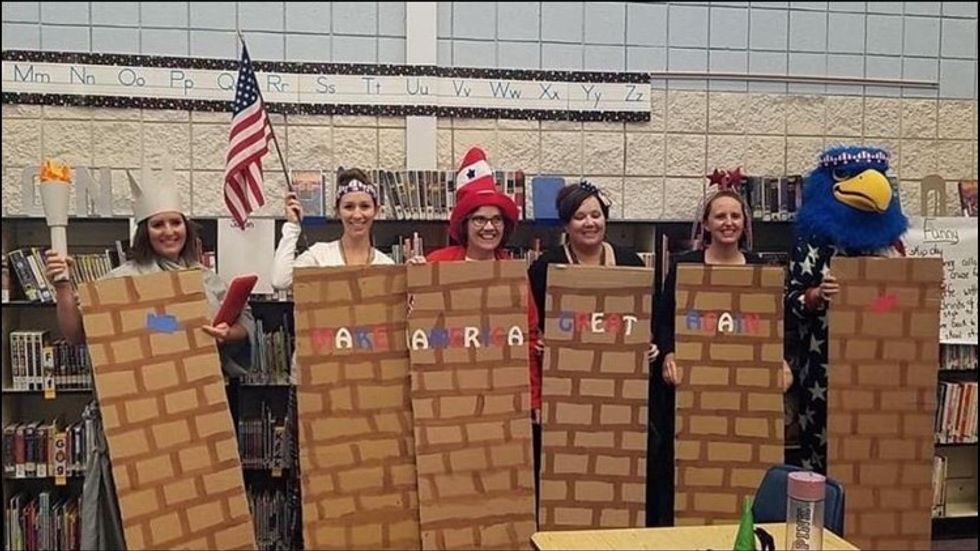 Fourteen staff at an Idaho primary school who dressed up as a border wall and as Mexicans for Halloween were put on administrative leave on Saturday for the “insensitive” and “inappropriate” costumes, a school superintendent said.

One photo showed seven staff from the Middleton Heights Elementary School dressed as characters, including the Statue of Liberty and an American eagle, holding a cardboard wall with “MAKE AMERICA GREAT AGAIN” on it. Another showed staff shaking maracas and wearing sombreros, ponchos and fake mustaches.

The incident came at a time of heightened tensions over immigration in the United States as President Donald Trump seeks to use the issue to boost Republican support ahead of congressional elections on Tuesday.

Middleton is a town of around 5,500 located about 23 miles northwest of the state capital, Boise.

The suspensions were decided at a meeting of the Middleton School District board on Saturday, Superintendent Josh Middleton told reporters. The district appointed a member of its crisis team to take over temporarily as school principal, he said.

“We are better than this. We embrace all students,” Middleton said in a Facebook Live video posted on Friday in which he apologized for the costumes. “We have a responsibility to teach and reach all students, period.”

The costumes were part of an after-school “team-building activity” among the teachers, who were competing to come up with the most stereotypical outfits, board Chairman Tim Winkle told the Idaho Press, adding that this did not justify the actions.

An open letter to the superintendent from 12 advocacy groups, including Immigrant Justice Idaho and the American Civil Liberties Union of Idaho, said the state’s climate “continues to grow more harmful against specific groups and identities,” including Hispanics.

“The intent or misjudgments of the individuals involved does not undo the trauma experienced by students, families and communities,” the letter said.

Hispanics are the largest minority group in Idaho at about 11 percent of the population, according to the 2010 census. Around 12 percent of Middleton Elementary School’s students were Hispanic in the 2015-2016 school year, according to the National Center for Education Statistics.