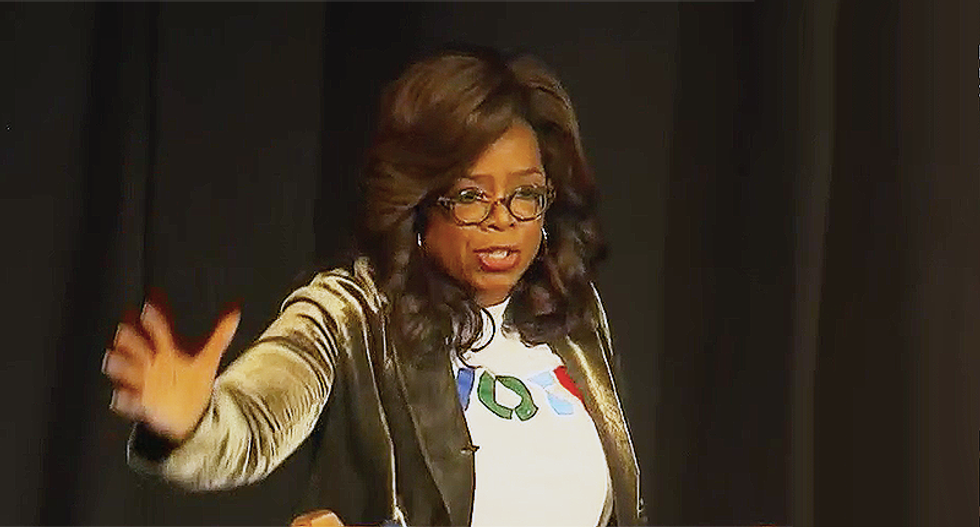 In an impassioned speech for Georgia gubernatorial candidate Stacey Abrams, Oprah Winfrey spoke about the importance of voting for groups that were barred from doing so in the past.

She recalled a story from Rev. Otis Moss Jr. of Cleveland, Ohio, who described his father’s struggle to vote for the first time. He woke up, put on his only suit and tie and walked six miles to the polling location. He was told to go into a garage and when he got there, they told him, "Boy, you're at the wrong place. You need to go to Mountville." He walked another six miles and was told again he was in the wrong place.

"And I picture him walking from dawn to dusk in his suit, his feet tired, getting to the Rosemont School and they said, 'Boy, you're too late,'" she continued. "The polls are closed. He never had a chance to vote. By the time the next election came around, he had died."

She told the audience she casts her vote for him as well as her grandmother who died before the Voting Rights Act of 1965 was passed and she had an opportunity to cast a ballot.

"I'm here today for the men who were lynched and humiliated and discriminated against and suppressed and repressed and oppressed for the right for the equality at the polls," she continued. "And I want you to know that their blood has seeped into my DNA and I refuse to let their sacrifices be in vain. I refuse. I'm here today to say, 'Don't let nobody turn you around!' You can't let their sacrifices be in vain."

She quoted Maya Angelou saying, "I came as 10,000 for all those who paved the way that we might have the right to vote."

"For anybody here who has an ancestor who didn't have the right to vote, and you are choosing not to vote, wherever you are in this state or this country, you are dishonoring your family," Winfrey said. "You are disrespecting and disregarding their legacy, their suffering and their dreams when you don't vote. So, honor your legacy."

The amazing golf career of Tiger Woods, from two-year-old prodigy to his epic comeback 2019 Masters victory, was in jeopardy Tuesday after injuries suffered in a serious solo car crash.

The 45-year-old American, among the world's most famous athletes for the past quarter-century, underwent surgery for multiple leg injuries following the early morning wreck near Los Angeles.

A federal judge late Tuesday cleared the way for California to begin enforcing a net neutrality law opposed by US telecom titans.

The judge denied a request by cable and telecom service companies to stop implementation of the law, which is intended to prevent them from favoring their own services and blocking or slowing rival services like Netflix.

The Pentagon is risking Republican ire with an unprecedented campaign to root out white supremacists and other right-wing extremists from the military.

Defense Secretary Lloyd Austin ordered unit leaders to conduct a daylong "stand down" by the first week of April to discuss extremism and hate groups within their ranks after dozens of military veterans took part in the deadly Jan. 6 insurrection, and Republican lawmakers and right-wing pundits are already crying foul, reported Politico.