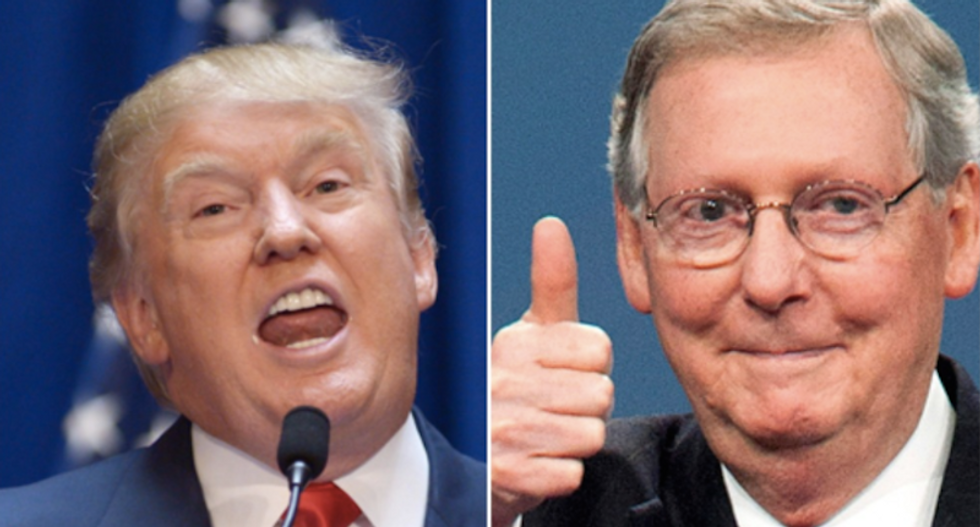 As Americans turn with unusual fervor and focus to the November 6 midterm elections, President Trump and the GOP seek to stoke fear by raising a series of concerns about immigrants and potential immigrants to our shores. Thousands of troops are rushed to our southern border to head off a caravan of refugees from Central America. Republican ads claim that Democrats are for “open borders.” Trump himself announces that he will issue an executive order to end the Fourteenth Amendment’s guarantee of “birthright citizenship,” while suggesting we should recoil at the prospect of “anchor babies.” Meanwhile, one immigrant-hater becomes so incensed that he mows down eleven worshippers at a synagogue in Pittsburgh that had actively assisted Syrian refugees, posting that “they’re committing genocide against my people.”

Trump and the GOP continue to label themselves “the party of Lincoln.” But they depart widely from Abraham Lincoln’s view and treatment of immigrants.

Trump’s latest claims about caravans and calls to end “birthright citizenship” came as I read Lincoln’s Springfield Neighborhood (2015) by educator Bonnie Paull and local historian Richard Hart, a volume I purchased a few months ago when my wife and I visited the Abraham Lincoln Library and Museum and the Lincoln Home National Historic Site in Illinois. The latter is where the Lincoln family lived from 1844 until leaving for the White House in early 1861.

Paull and Hart show that Lincoln’s Springfield was a diverse place, one with a wide variety of foreign-born residents. By 1860, the year Lincoln was elected to the presidency, the city had 9,320 residents, more than a third of whom were immigrants from foreign lands. Furthermore, the population of immigrants in Springfield had nearly tripled during the preceding decade. These new residents were not just emigres from England, Scotland, and Germany who might be easily assimilated. Nearly half were Irish Catholics and Portuguese, culturally distinct from earlier residents. Many of these, including sixty Irish Catholics, lived within a three-block radius of the Lincoln home.

His most direct encounters with Springfield’s foreign-born seem to have involved the city’s Portuguese minority. In November 1849, 130 Portuguese Protestant converts came to Illinois from the island of Madeira to escape religious persecution by Catholics there. They had accepted an offer from the American Hemp Company to become agricultural workers elsewhere in Illinois. When the firm reneged on the deal, they settled in Springfield.

Several of these Portuguese migrants worked at various points in the Lincoln household. Justina Decrastos did their laundry and ironing in the latter part of the 1850s. Lincoln befriended her daughter Lizzie, giving her “hossy” rides on his knee, carrying her piggyback to school in the snow, and even rescuing her from a Fourth of July fireworks prank gone awry. Lizzie visited the Lincolns in the White House during the Civil War. Another Portuguese resident, Frances Affonso de Freitas, did their cooking and laundry during the earlier part of the 1850s. They gave another Portuguese-born servant the money to buy her wedding dress.

One of the closest relationships between Springfield’s Portuguese community and the Lincoln family involved Charlotte Rodrigues de Souza, Mary’s seamstress during the presidential election year of 1860. She made the dresses that Mary wore during Lincoln’s candidacy and while he was President-Elect. De Souza became a close confidant of Mary and regularly ate breakfast and lunch with the family. Mrs. Lincoln wore a De Souza creation at her husband’s first inauguration and on the night of his tragic assassination at Ford’s Theatre in Washington, D.C.

Lincoln encouraged Portuguese immigrants in Springfield to become home owners, grasping their stake in the American Dream. He assured several that he would back them, if needed, and “see that it was paid for.” He even made two loans totaling $250 – a sizeable sum then – to a Portuguese migrant named Rita Angelica da Silva so that she could purchase a lot in the city on which to build a home.

This fascinating book not only demonstrates how Springfield “became a melting pot of diverse ethnic and cultural milieus,” with a dizzying mix of languages, food ways, religious faiths, ethnicity, and holidays and customs being expressed and observed. It makes clear the enthusiasm with which Lincoln embraced them. Paull and Hart observe that he “thrived on this diversity and welcomed people of all nationalities and races into his neighborhood and his life.”

Lincoln didn’t speak much about immigration in the public arena – slavery was his primary concern following his return to national politics in the mid-1850s. But he conveyed his strong opposition to anti-immigrant sentiment in an August 24, 1855, letter to his close friend Joshua Speed of Kentucky. Anxious that the so-called Know Nothing (or American) Party was stirring fear of immigrants largely for political purposes, in contradiction to Lincoln’s understanding of American ideals, he informed Speed: “I am not a Know Nothing. That is certain…. Our progress in degeneracy appears to me to be pretty rapid. As a nation, we began by declaring that ‘all men are created equal.’ We now practically read it ‘all men are created equal, except negroes.’ When the Know Nothings get control, it will read ‘all men are created equal, except negroes, and foreigners, and Catholics.’ When it comes to this I should prefer emigrating to some country where they make no pretence of loving liberty – to Russia, for instance, where despotism can be taken pure, and without the base alloy of hypocracy.”

Lincoln’s views about immigrants were expressed most clearly in his interactions with his neighbors in Springfield. Paull and Hart note that the city was “where he was exposed to this diversity of humanity. Lincoln did not resist the exposure; rather, he nurtured the melting pot. His knowledge of the diverse customs and practices of his neighbors helped him to understand and embrace the unique historical phenomena of a diverse America. These people were his neighbors.” Lincoln welcomed them as fellow Americans.

Until President Trump and the GOP discover “the better angels of their nature,” they need to stop claiming the mantle of “the party of Lincoln.” Our sixteenth president would abhor their efforts to stoke fears of Hispanic caravans from Central America, to put in place Muslim bans, or to call for revocation of “birthright citizenship” for the children of immigrants as promised in the Fourteenth Amendment – itself a product of “the party of Lincoln.” Wherever Lincoln is right now, he is not amused.