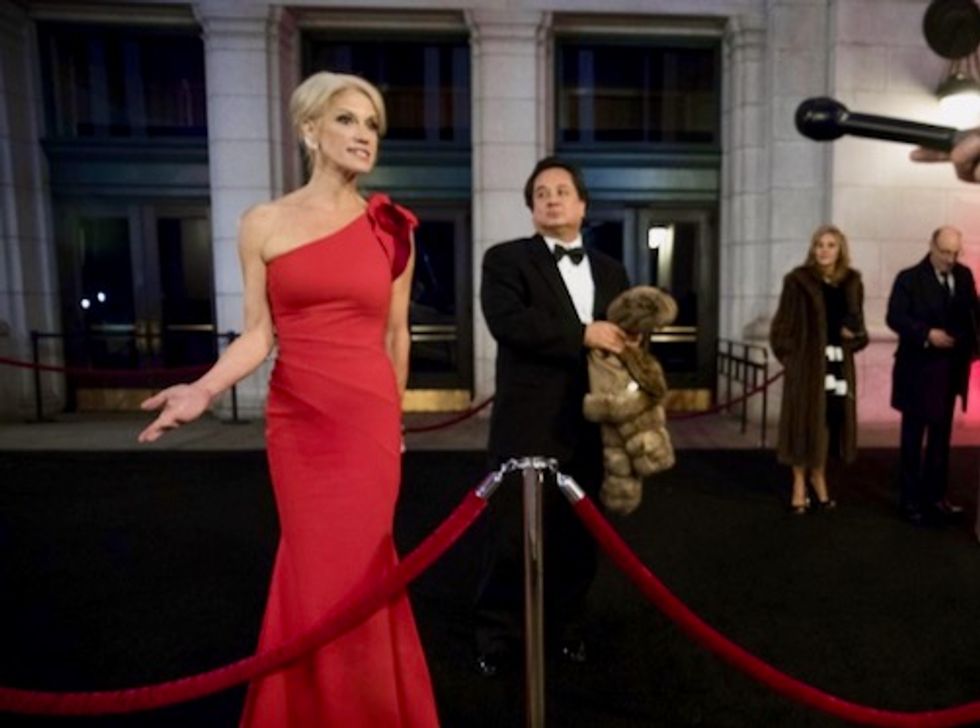 He is one of Donald Trump's harshest critics.

She is one of the president's closest advisers.

And they're husband and wife.

The marriage of George T. Conway III and Kellyanne Conway has been described as the best reality show in Washington.

Kellyanne Conway, 51, served as Trump's campaign manager and is credited by many with making possible Trump's improbable elevation to the White House.

Now counselor to the president, she is known for her pugnacious promotion of the administration's policies as a guest on cable news shows and for coining the phrase "alternative facts."

George Conway, 55, is her husband of 17 years and the father of their four children -- three girls and a boy, George Jr.

A prominent conservative attorney, Conway is a former member of the Republican Party who -- until he soured on Trump -- was under consideration for a high-ranking Justice Department position.

Asked last month on a Yahoo News podcast why he turned down the chance to become assistant attorney general, Conway called the administration a "dumpster fire" and said he would rather "move to Australia" than vote for Trump again.

Getty Images North America/AFP/File / Chip SomodevillaA prominent conservative attorney, George Conway is a former member of the Republican Party who -- until he soured on Trump -- was under consideration for a high-ranking Justice Department position

It was a rare media appearance by Conway, who prefers to use his Twitter feed -- @gtconway3d -- to spew an endless stream of mockery and derision at a president whom he clearly loathes.

As Trump's legal woes deepened last week, Conway retweeted a picture of a 1973 newspaper headline in which then-president Richard Nixon insisted "I'm not a crook."

When Trump claimed last week that a filing by New York prosecutors in a case involving his former lawyer, Michael Cohen, "totally clears the president," Conway had a stinging rejoinder.

"Except for that little part where the US Attorney's Office says that you directed and coordinated with Cohen to commit two felonies," he tweeted to his 225,000 followers. "Other than that, totally scot-free."

He responded to another Trump tweet with a reference to the federal statute that covers witness tampering, a tweet which received nearly 59,000 "likes" and nearly 17,000 retweets.

In between his own Twitter jabs at the president, Conway retweets a constant stream of news articles and links critical of the Trump White House.

Last month, the Harvard and Yale graduate joined other conservative lawyers in forming a group called Checks and Balances dedicated to upholding the Constitution and the "rule of law."

Kellyanne Conway herself has rarely addressed her husband's anti-Trump agitation, although she did call them "disrespectful" in an interview with The Washington Post in August.

"I think it disrespects his wife," she told the newspaper.

She later claimed in an interview with "Fox News Sunday" that it "doesn't affect me or my job at all."

"I'm sure the feminists are really cheering me on today, an independent... strong woman in a very powerful position that disagrees with her husband," she said.

On the Yahoo News podcast, George Conway was asked what his wife thinks of his constant swipes at Trump.

GETTY IMAGES/AFP/File / SPENCER PLATTKellyanne Conway herself has rarely addressed her husband's anti-Trump agitation, although she has called them "disrespectful"

"I don't think she likes it," he said. "But I've told her I don't like this administration so it's even, you know.

"It's one of these things," he went on. "If I had a nickel for everybody in Washington who disagrees with their spouse about something that happens in this town, you know, I wouldn't be on this podcast I'd probably be on a beach somewhere."

Earlier this month, Trump's son Eric came out in defense of Kellyanne Conway and tweeted a condemnation of her husband.

"Of all the ugliness in politics, the utter disrespect George Conway shows toward his wife, her career, place of work, and everything she has fought SO hard to achieve, might top them all," Eric Trump tweeted. "@KellyannePolls is (a) great person and frankly his actions are horrible."

George Conway did not respond personally to the attack but retweeted a number of comments by others mocking Eric Trump's show at gallantry.

Trump himself has had little to say about George Conway but he did accuse "Mr Kellyanne Conway" last month of "just trying to get publicity for himself."