Here's the solution to the Democrats' impeachment dilemma 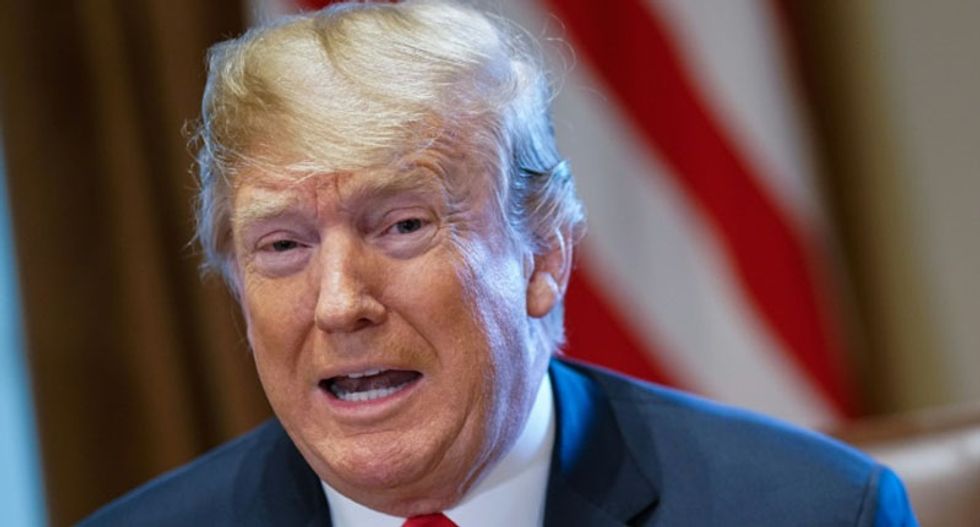 If President Donald Trump is brought down, it will be Republicans who finally seal his fate, not Democrats.

No matter how much evidence is uncovered by Special Counsel Robert Mueller, the U.S. attorney from the Southern District of New York, the New York Attorney General, or any other prosecutors who happen to be investigating the president — it's almost certain that impeachment is the only viable way the government could respond. While a president may be indictable, even critics of Trump acknowledge that allowing charges against Trump to go to trial before he is removed or his term is ended poses serious constitutional challenges that may be insurmountable, as former Acting Solicitor General Neal Katyal has argued.

But while Democrats hold the power to impeach Trump in the House of Representatives, they'll need at least 16 Republican senators to join with all the Democratic senators to successfully remove him from office. As of now, that appears to be a steep hill to climb.

With the new court documents filed last week revealing profoundly troubling connections between Trump and the Kremlin during the 2016 campaign, a clear assertion from prosecutors that the president directed a criminal violation of campaign finance laws, and more evidence that he continues to attempt to obstruct justice, the demands upon the new Democratic House majority to use its major tool to hold Trump accountable for these actions will grow. At the same time, the Republican power in Congress indicates that any successful impeachment will be an embarrassing failure in the Senate.

And despite the fact that Trump's approval rating is consistently underwater by a large margin, the general public's sentiment stands against impeachment. Polling on the question shows that starkness of the dilemma — while impeachment is extremely popular among Democrats, the majority of Americans are against it by 51-33. Even while Americans, by and large, don't like Trump, they see impeachment as an extreme step.

The split between what the Democratic base wants and what a majority of Americans wants (and what appears to be impossible) may be less problematic for soon-to-be House Speaker Nancy Pelosi and her party as it initially seems. While the party's voters may want impeachment, most may be savvy enough to realize that there's no point in pursuing a doomed gambit and that the best hopes for removing Trump lie in 2020.

But there's another downside to largely avoiding impeachment talk, as Democrats succeeded in doing during the midterm elections. It sends the signal that, despite Trump's obvious wrongdoing, his actions are not impeachable. It allows the public to get used to the fact that the president has, by all appearances, broken important laws and precedents, and the longer this goes on, the more Republicans are able to shift the goalposts with regard to what needs to be proven in order to justify impeaching Trump.

It's possible that with enough new revelations the political dynamics will shift and Republicans will join calls for impeachment. But Trump's conduct has long passed the point at which any other presidency should have collapsed, and Democrats need a strategy that accommodates political realities without capitulating to the GOP's corruption.

There is a solution to this dilemma, and it's one surprisingly few Democrats have embraced: Call for Trump's resignation.

There's overwhelming justification for Trump to step down. Even before he was elected, his misconduct toward and abuse of women was known. Former Sen. Al Franken (D-MN) was called upon to resign and eventually did when faced with a significantly shorter, but still condemnable, list of alleged offenses.

And since the election, the scope and number of Trump's misdeeds have only escalated. While no criminal indictments yet lay out explicit violations of the law with regard to his interactions with Russia during the campaign, they are clearly well beyond what is acceptable for any candidate for public office. Trump continually lied about these contacts with the Kremlin while also covering up the Russian government's active and ongoing disinformation and cyberwarfare campaign targeting American elections. He lied to the American people about his ties to Russian President Vladimir Putin while these attacks were continuing, and he accepted the Kremlin's help in covering up his lies.

With these actions, Trump opened himself up to being compromised by a foreign power. Even if no criminal conduct on his part occurred, this is unacceptable behavior from a commander-in-chief that undermines national security and requires that he step down.

And while the FBI continues to investigate the clear effort Russia went to infiltrate and corrupt his campaign, Trump has fought the probe at every step by obstructing justice. Were Trump simply a victim of clever Russian spies, that would be worrying enough in its own right. But by actively working to obstruct justice by undermining the investigation into these acts, Trump has sided with a hostile foreign intelligence agency. This is, again, a betrayal of national security and, in the view of many former prosecutors, a clear criminal act.

Calling for Trump to resign over these offenses may seem an awkward solution because we've known about them for so long. Some of the information has come out in slow drips, normalizing Trump's violation and undermining the necessary outrage.

But last week, prosecutors gave Democrats the perfect inflection point. With the court filings revealed last week by Mueller and the SDNY prosecutors, the party has a newfound basis for calling for Trump's resignation.

As many observers pointed out, Trump was directly implicated in SDNY's sentencing memo about Michael Cohen's crimes. Prosecutors have now said, clearly and on the record, that Cohen carried out hush money payments at Trump's direction in a criminal violation of campaign finance law. Cohen will be sentenced to prison time this week, in part on the basis of that crime. The fact that the person who ordered him to commit those crimes — which helped him get elected — remains president is a national disgrace. This is a perfect reason to call on Trump to resign.

The filings also built upon the evidence for collusion and obstruction as well, codifying them in prosecutors' words that can serve as a solid foundation for Trump's resignation. Mueller's filing about Paul Manafort's lies indicated that the former Trump campaign chair had strong ties to a man believed to be involved with Russia intelligence, ties which Manafort allegedly tried to cover up in a criminal way. Cohen, too, criminally covered up his and president's ties to Russia, and both Cohen and Manafort were shown to have had continuing contact with the Trump administration in the last year that bolsters obstruction of justice claims.

Of course, Republicans and the White House will dismiss calls for resignation as ridiculous. But there's a very strong case to be made for it, and it will provide a useful countermeasure to Trump's complaints if impeachment hearings proceed, as will likely become necessary.

Even if Trump is technically innocent of all the crimes he is clearly implicated in — as he will no doubt continue to insist — the evidence still demands that Democrats take the apparent crimes very seriously. Republicans would no doubt be wielding pitchforks if a President Hillary Clinton were implicated in one-tenth of the misdeeds Trump has brazenly engaged in before our eyes.

Republicans will say that impeachment, investigations, and scrutiny of the president's misdeeds will damage the country. They are probably right. But ignoring the mountains of evidence against the president would do much more harm to the country by sending a signal that the people cannot trust their government and that powerful people will never be held accountable.

And if Republicans are concerned about the harm the proceedings will cause, they can join with Democrats in the calls for resignation. Democrats could rightly say they've been backed into a corner, but that resignation offers the country a way out of the unfolding chaos. If Trump stepped down, he'd be saving the country from an awful lot. If he stays on, despite the damning case against him, he is responsible for the trauma the ongoing fights inflict upon the American people, not the Democrats.

The history of presidential impeachment is pretty clear on this as well. President Bill Clinton's impeachment was doomed from the start, which is why it eventually failed in the Senate. President Richard Nixon himself, on the other hand, was doomed as soon as the White House tapes revealed the stark nature of his crimes — which is why impeachment never made it to the Senate. His Republican allies told him he would be removed, so he resigned instead.

Trump may prove more difficult to oust than Nixon if it ever comes to that. But Vice President Mike Pence might be able to offer the right incentive to leave: the promise of a pardon — perhaps not only for Trump but for any of his family members who are likewise implicated in crimes.

That might be enough to get Trump to go of his own accord. And maybe Pence would follow through, or maybe he would not. President Gerald Ford was not treated kindly by the voters for pardoning Nixon.

But forced resignation, rather than impeachment, will likely end up being the best way to hold Trump accountable for any crimes if it comes to that. Democrats should start laying the groundwork for that potentiality by demanding he step down now.