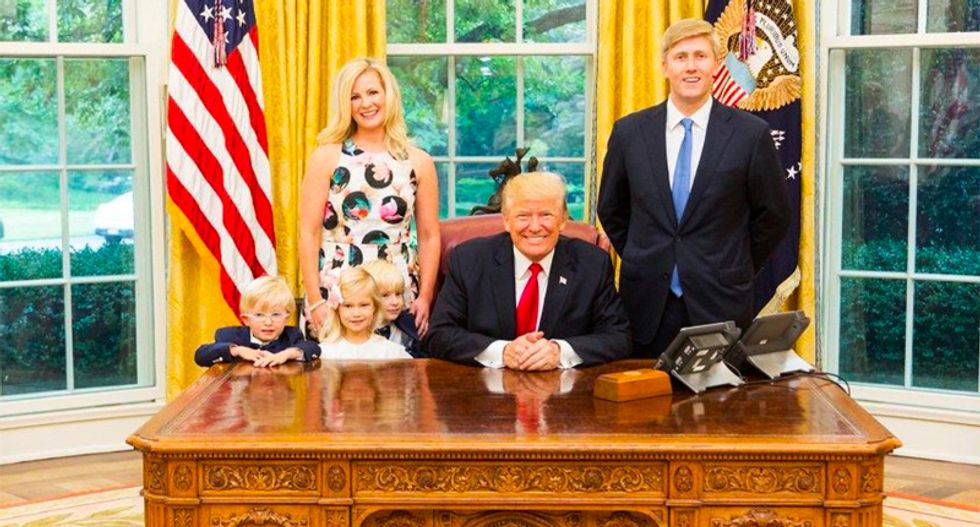 U.S. President Donald Trump and Vice President's Chief of Staff Nick Ayers (R) and his wife Jamie Floyd with their children pose for pictures in the Oval Office at the White House in this social media photo released by Vice President Mike Pence's office in Washington, DC, U.S., on July 28, 2017. Courtesy Vice President's office/Handout via REUTERS

Nick Ayers, in talks with President Donald Trump to become his new White House chief of staff, is a 36-year-old political whiz-kid who could help with the looming re-election campaign, but critics question whether he has the grit needed to keep Trump and an often chaotic administration under control.

A photogenic Georgia native, Ayers has advised a series of high-profile Republican governors and has been Vice President Mike Pence’s chief of staff, running one of the most effective political teams in Washington.

He has spent his entire career in Republican politics - a sharp contrast to the man he would replace, retired Marine Corps general John Kelly - and earned a fortune selling ads to political campaigns.

Still, Ayers has little experience wheeling and dealing on legislation in Congress and would take the reins at a time when Trump is weakened by Democrats winning control of the House of Representatives at midterm elections last month.

Trump now faces House probes into his businesses and most controversial policies, and special counsel Robert Mueller is investigating possible collusion between Trump’s election campaign team and Russian officials in 2016.

Chris Whipple, who wrote a book on White House chiefs of staff called “The Gatekeepers,” said he is skeptical that Ayers has enough clout to be effective as Trump’s chief of staff.

“I think Donald Trump desperately needs in that job someone who can walk into the Oval Office, close the door, and tell him what he does not want to hear,” Whipple said.

“I’m not sure he (Ayers) has the gravitas to do that,” Whipple said.

Kelly won credit for imposing some degree of order on the White House but he struggled with Trump’s habit of throwing the focus off-course with rogue tweets and personal attacks, including against members of his own administration and party.

“The question is going to be whether a new chief of staff can have the same kind of gravitas that John (Kelly) did, which is the ability to stop the wrong decision from being made,” said Leon Panetta, who was chief of staff for former President Bill Clinton from 1994 to 1997, and later became CIA director and Secretary of Defense in the Obama administration.

Even the best counsel will matter little unless Trump trusts his new chief of staff and will listen to frank advice, said Panetta.

“You’re not going to be a good chief of staff if you can’t speak truth to power ... I don’t get the impression that this president particularly likes people speaking truth to him.”

Trump said on Saturday his next chief might be in place only for “an interim basis” and that he would announce his pick in coming days.

A White House official said that Trump had wanted a two-year commitment from Ayers, who was unsure that he could stay that long. Ayers has young children, and had been planning to leave the White House in December, the official said.

Perdue, now Trump’s agriculture secretary and a key link to his rural supporters, introduced Ayers to his future wife, Jamie Floyd, a second cousin of Perdue. The Ayers are parents to five-year-old triplets.

Ayers went on to work with other Republican governors, and overhauled the Republican Governors Association (RGA) when he ran it from 2007 to 2010, boosting the group’s coffers and making it more politically powerful.

Bill Palatucci, a national committee official of the Republican Party and senior advisor to former New Jersey Governor Chris Christie, credits Ayers’ work at the RGA with helping Christie get elected in an overwhelmingly liberal state.

“His strategic skills are unsurpassed,” Palatucci said. “He understands both the policy and politics of the big issues.”

He divested ownership of his previous company, C5 Creative, after he entered the government, a sale valued between $5 million and $25 million, and he also holds valuable farmland in Georgia worth between $1.5 million and $11 million.

A string of wins was broken in 2012, when he managed the short-lived presidential campaign of Tim Pawlenty, a former Republican governor of Minnesota.

Pence tapped Ayers to help him with his 2016 Indiana gubernatorial reelection, and kept him on as adviser when he became Trump’s vice presidential running mate.

Ayers, an evangelical Christian, has developed a close relationship with Trump during his time as Pence’s chief of staff. A rare flashpoint came in April, when Pence upset Trump by hiring an aide who had been deemed a “Never Trumper” - a term that describes anti-Trump Republicans. Two days later, the aide was gone.

Ayers was not a universally popular candidate among other White House staff.

Some Trump advisers argued against elevating him out of concern that he might not necessarily have the president’s best interests at heart, given his loyalty to Pence and lack of personal history with Trump himself.

Trump was told directly about these concerns, one source said.

Other advisers, however, have told Trump that Ayers’ political experience would come in handy as Trump embarks on his re-election campaign, strategically choosing what events Trump should attend and how much time he should spend campaigning. Kelly’s inexperience on matters of politics had been glaringly obvious to Trump, officials said.