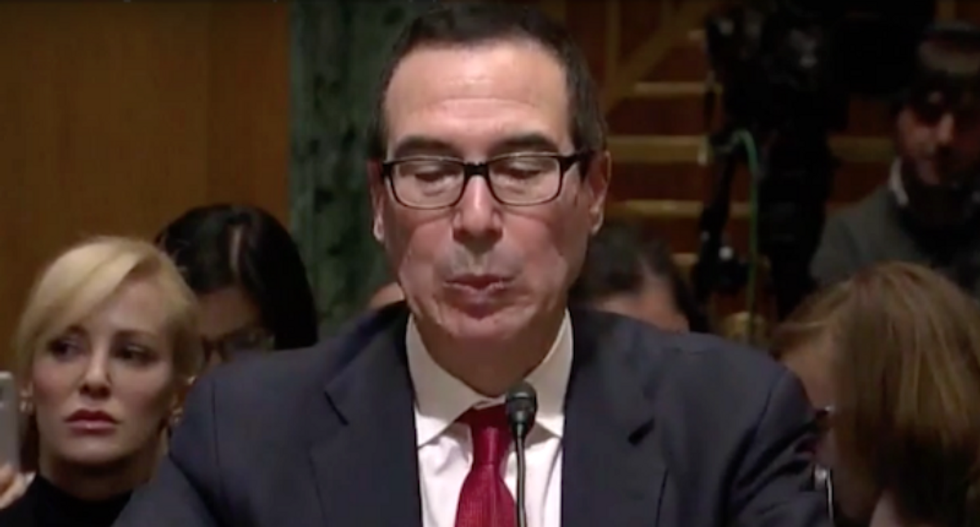 Secretary of the Treasury Steven Mnuchin is facing harsh criticism for an open letter sent by his department about Wall Street that either addressed a brewing economic crisis no one else knows about — or, by asking alarming questions out of the blue, risks creating a crisis out of nothing.

The economy has been rocked by Mnuchin's letter, the Dow Jones Industrial Average had its worst recorded Christmas Eve day of trading Monday, dropping more than 640 points, while the S&P 500 dropped more than 50 points and entered a bear market, according to Business Insider.

(1/2) I have spoken with the President @realDonaldTrump and he said “I totally disagree with Fed policy. I think th… https://t.co/pIHsfapnqk
— Steven Mnuchin (@Steven Mnuchin) 1545519761.0

(2/2) especially in light of my major trade negotiations which are ongoing, but I never suggested firing Chairman J… https://t.co/Oe5oqa3bvO
— Steven Mnuchin (@Steven Mnuchin) 1545519784.0

Yet the real culprit seems to be Mnuchin's public letter from Sunday. After reviewing that he had called the CEOs of America's six largest banks, the Treasury Department wrote that "the CEOs confirmed that they have ample liquidity available for lending to consumer, business markets, and all other market operations. He also confirmed that they have not experienced any clearance or margin issues and that the markets will continue to function properly."

The letter also included a statement from Mnuchin, who said that "we continue to see strong economic growth in the U.S. economy with robust activity from consumers and businesses. With the government shutdown, Treasury will have critical employees to maintain its core operations at Fiscal Services, IRS, and other critical functions within the government."

While such a public message would have made sense after the economic panics of 1987 or 2008, it is extremely unorthodox for a high-ranking public official to offer this kind of public reassurance — and to do so after speaking with America's most powerful financial executives — when no crisis is publicly apparent.

"If this weren’t the end of December, I would have thought it was April Fools. The markets are already nervous enough. It’s like sending out a message saying our space shields can intercept incoming asteroids. Uh, I didn’t know there were any coming our way," Jared Bernstein, former chief economist to Vice President Joe Biden, told The Washington Post.

Phillip Swagel, who addressed the 2008 financial crisis while working for the Treasury Department under President George W. Bush, told the Post that "there is no credit crunch now. The problem is investor uncertainty extending from the building next door to the Treasury."

Annie Lowrey, a contributing editor at The Atlantic covering economic policy, speculated that there could be three explanations for Mnuchin's seemingly inexplicable letter.

"Option one: The Treasury secretary was speaking to an audience of one," Lowrey wrote. "Mnuchin is under enormous pressure from President Trump, who is upset about the market sell-off and mad at the current Federal Reserve chairman, Jay Powell. The press release was perhaps an attempt to show Trump that Mnuchin was doing something, anything, to talk the markets back into stability."

While White House budget chief Mick Mulvaney said on Sunday that Trump knows he "doesn't have the ability" to ax Powell, The Washington Post reports it is Mnuchin who may be on the chopping block:

Mnuchin had enjoyed a relatively close relationship with Trump until recent months. Trump has blamed Mnuchin for recommending Powell to the Fed job, and Trump has also fumed at Mnuchin over the stock market's poor performance this year.

The second option, according to Lowrey, is that "the Treasury secretary believes that the market correction is due in part to animal spirits—animal spirits he could quiet by reminding everyone that the financial system is in fine shape." Finally, there is the most ominous possibility, namely that "Mnuchin has some troubling insider knowledge, and wanted to broadcast to the markets that he is aware and in charge. Maybe some financial firms are teetering? Maybe rising interest rates and falling asset prices are straining some important market participants, and it just has not yet become evident in public reports?"

Of course, as Lowrey noted, none of these explanations would justify Mnuchin's decision. If he did it to please Trump, he only risked making the economy worse, which would doubtless anger the president further. If he wrote the letter to soothe a restless market, this was hardly the way to do it, and if there is an actual crisis brewing, darkly hinting at it without taking meaningful remedial action only makes things worse.

Either way, the verdict on Mnuchin's letter was perhaps best stated by MarketWatch's Tim Mullaney, who took for granted that Mnuchin wrote what he did to placate his boss.

"Imagine spending a morning normally devoted to preparing to mark the birth of a savior brushing up on the exact requirements of the 25th amendment for removing a president of the United States from office," Mullaney wrote. "But that’s what I did, as more of your retirement money and mine was flushed down the toilet, courtesy of current Treasury Secretary Steven Mnuchin’s utterly inexplicable decision this weekend to weigh in publicly on big U.S. banks’ ability to withstand a run that literally no one had said was happening, as part of a panicking administration’s unwillingness to tell President Donald Trump 'no' about anything."