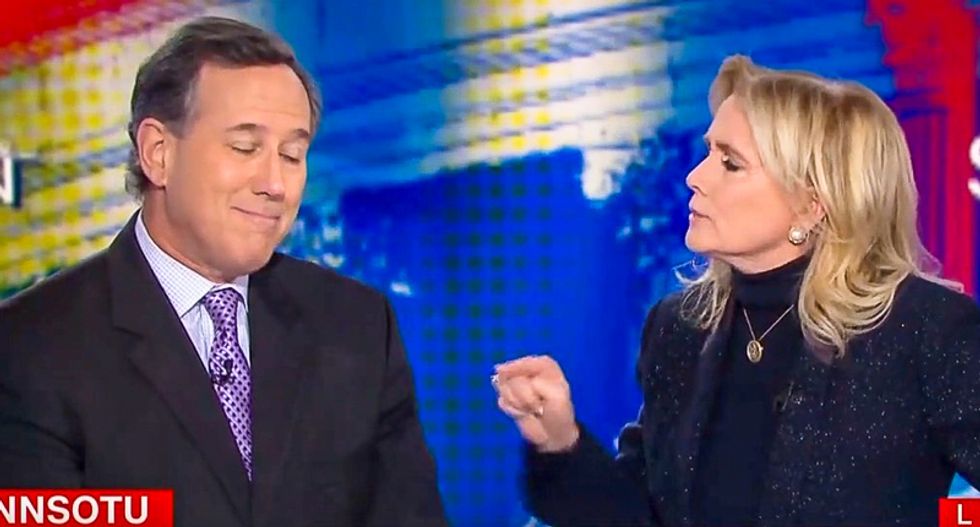 CNN Republican strategist Rick Santorum met his match on Sunday when he tried to tell three women experts that President Donald Trump is not to blame for the government shutdown over funding for the president's border wall.

During a panel discussion on CNN's State of the Union, Santorum insisted that President Trump was not going to reopen the government until the Democrats give in on border wall funding.

"The Democrats don't want to give the president a win on this issue," he opined. "And if that's the case, if they're that dug in, we're going to be here for a long time because I don't think the president is going to back down. [They will have to give him] at least some colorable money that can be used for wall funding."

"I think he is clear that some wall money is necessary and it's really up to the Democrats," he added.

"No, he is not right," Rep. Debbie Dingell (D-MI), one of three Democratic women on the panel, said of Santorum.

"The president has not reached out to Nancy Pelosi," Dingell observed. "The Senate passed -- and thought they were done -- a continuing resolution that would have funded the government until Feb. 8. [House Speaker] Paul Ryan refused to bring it up because the president suddenly -- after telling them he would sign it -- said that he wouldn't sign it."

"Right now, we have a Republican president, Republican House and Republican Senate," she continued. "They're in control. We need to have discussions. I can tell you right now, [when the Democrats take over] on Jan. 3, one of the first actions that day will be a resolution to pass through the House that will be to reopen the government."

"But it won't be to fund the wall!" Santorum complained. "And that's the problem."

Former Labor Secretary Linda Chavez pointed out that Trump is perpetrating a "big lie" that there is a "crisis" of illegal immigration.

"We are no longer seeing single men coming to work in the United States," she explained. "We are seeing families who are fleeing violence in their countries."

"But this idea that we need a border wall is ridiculous," she told Santorum. "We have exponentially increased the amount of funding that goes to our borders and, in fact, it is more money that we spend doing that than we do on all other federal law enforcement combined."

"Republicans need to realize that if they do not want to get the government back open, they are just hurting more American people," Sanders said. "You want our borders to be secure, but the Department of Homeland Security is effected by the shutdown."

"Look, essential services are continuing," Santorum replied in defense of the shutdown. "Those people are going to work -- you are right -- they are not getting paid. They will eventually get paid... Now, government contractors won't get paid and that's a lot of people these days. They won't get paid."

"We shouldn't be playing games with these people's lives," Dingell interrupted. "These are public servants."

"We are ready!" Dingell shot back.

"Debbie, everybody on the Democratic side is saying, 'No wall funding!'" Santorum shouted. "That's not compromise."

"What we have said is we are for border security!" Dingell stated. "I don't know a single Democrat that is not for national security! But let's do something that's common sense. There are hundreds of studies that this border wall doesn't work."

"You're making my point, Debbie," Santorum shrugged. "You're saying, 'We'll do anything but what the president says he needs.'"

"But what's the wall going to do?" Sanders exclaimed at Santorum.

"You're making the case about something Democrats have voted for, supported in the past," Santorum griped. "And all the sudden, because the president's for it, you're against it!"

"Can you tell us?" Sanders queried. "What will the wall do? Because the majority of the folks who come into this country undocumented, come in with visas and they overstay their visas."

"I agree with that," Santorum admitted, trying to regain control of the conversation.

"We are in a labor shortage right now," Chavez noted. "Employers are desperate for workers, and the president doesn't just want to cut down illegal immigration, he wants to reduce legal immigration and that is a travesty."