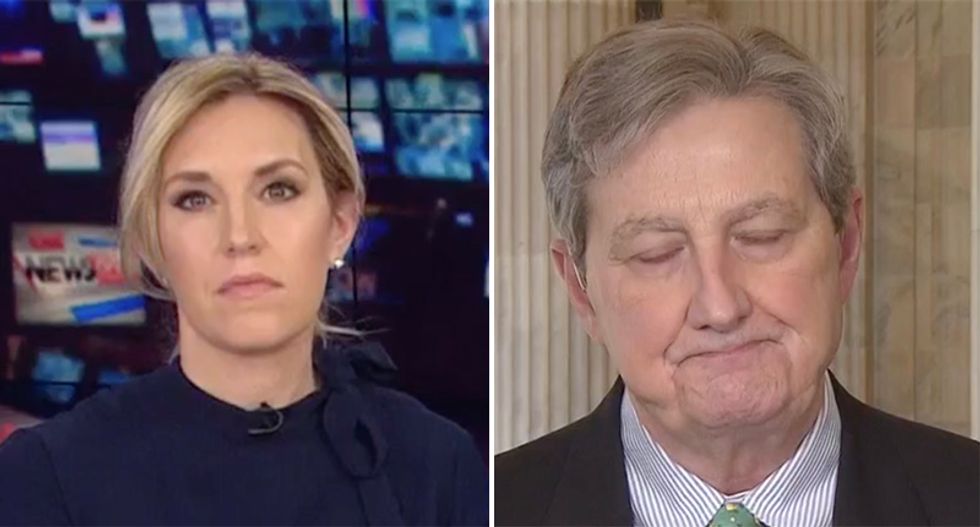 CNN host Poppy Harlow pulled up a Republican senator on Thursday morning after he attempted to blow off Donald Trump's repeated assertions that Mexico would pay for a border wall as "irrelevant."

Appearing on CNN, Sen. John Kennedy (R-LA) repeatedly blamed House Speaker Nancy Pelosi (D-CA) for allowing her hatred of the president to get in the way of a deal that would re-open the government.

After sharing a clip of White House spokesperson Mercedes Schlapp saying taxpayers would end up paying for the wall, Harlow asked about Trump's Mexico promises that date back before his election.

"You heard the president many times during the campaign say that Mexico would pay for the wall, right?" Harlow asked Kennedy, who admitted he did.

"So he just said this morning quote, 'I never said this,' that's not true, he did," she pressed. "Do you think the president has misled the American people on who will actually pay for this? "

"No, I don't," Kennedy replied. "I don't think that is relevant to the discussion. "

"Poppy, I understand your point, I just don't agree with it," Kennedy defended. "I don't think it is relevant to this discussion. The only real relevant issue to this if you strip away the politics and personalities and dislike for each other is: can you seal a 1,900-mile border without using in part a wall or a physical barrier?"

"I don't care what you call it, you don't have to call it a wall," he said attempting to change the subject.

Rep. Zoe Lofgren (D-CA) couldn't help but note that the Republicans that took over the House of Representatives don't have much of a leg to stand on when it comes to their conspiracies.

"Well, it doesn't feel good that my colleagues who had information that the committee needed basically blew off a subpoena that the committee sent that was duly authorized," Lofgren said. "So, that is not positive. We referred that matter to the Ethics Committee. But it doesn't make them look particularly eager to uphold the law when they have defied it."