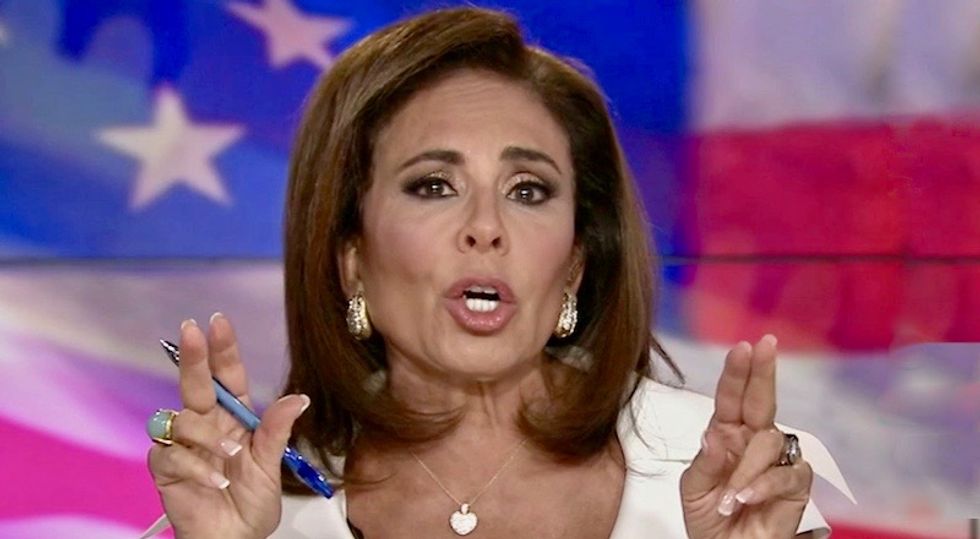 Fox News host Jeanine Pirro on Sunday admitted that she had been wrong to report that House Speaker Nancy Pelosi (D-CA) had spent the weekend in Puerto Rico during the ongoing government shutdown.

During a Saturday interview in which Pirro asked President Donald Trump if he was a Russian agent, the Fox News host also suggested that Pelosi was shirking her congressional duties by traveling to Puerto Rico.

By Sunday, Pirro was walking back her story on Twitter.

"During my exclusive interview with Pres Trump I said Speaker Pelosi was in Puerto Rico with a bunch of her Democrat [sic] colleagues," she wrote. "I based that on numerous reports that turned out to be wrong. The Speaker’s office says she has been in DC all weekend and I take them at their word."

During my exclusive interview with Pres Trump I said Speaker Pelosi was in Puerto Rico with a bunch of her Democrat… https://t.co/v2kkToRQpN
— Jeanine Pirro (@Jeanine Pirro)1547406742.0

However, the Fox News host did not offer an apology for her mistake.

Pirro's admission was met with ridicule from Twitter users. Read some of the tweets below.

@JudgeJeanine You also left viewers with the impression that "Dems don't want border security" at all. When Trump… https://t.co/fTiPZmTv4l
— GrannyGoose (@GrannyGoose)1547407649.0

@JudgeJeanine Fox News should change its tagline to "Numerous Reports That Turned Out To Be Wrong."
— Dave Bartoletti (@Dave Bartoletti)1547407802.0

@JudgeJeanine It was a cringeworthy interview with a ‘judge’ and a ‘ president ‘ who doth demean their respective p… https://t.co/8NgELC318m
— Lee Michael Walton (@Lee Michael Walton)1547408650.0